The medical services of the Bundeswehr were centralized into the Bundeswehr Joint Medical Service in 2002. The responsibility for the medical support of the vast majority of the military was transferred to this major organisational element. However, because of the specialised needs of military aviation, an Aeromedical Service was retained within the aeronautical units maintained by the Air Force, Army and Navy of the Bundeswehr, and a centralised aeromedical institution under the lead of the Surgeon General of the Air Force was established to provide specific support in the entire field of Aerospace Medicine. 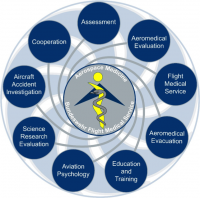 The duties of the Flight Medical Services include not only the medical examination, evaluation and support of military flight personnel, but also the evaluation of pilots on behalf of civilian aviation authorities. The Center for Aerospace Medicine provides a broad spectrum of services, such as the selection of candidates for flying duties by means of computer and simulator-based testing of aptitude and trainability, the provision of national and international training courses in aerospace physiology and aviation medicine, as well as the testing of aircraft, aircraft equipment, flight clothing and aviation life support equipment with regard to their suitability for use by the flying crews. Further tasks include the forensic investigation of aircraft accidents, including toxicological and DNA analysis, the processing of all aspects of flight physiology, and intervention in crisis situations. As a science-based service provider, the AFCAM has to assure the quality of its services by conducting its own scientific research. All tasks relating to scientific aspects, research, testing and development in the Center for Aerospace Medicine of the German Air Force are working in one organisation.

Following the restructuring, the Surgeon General of the German Air Force is now in command of the AFCAM (ZentrLuRMedLw), which comprises the personnel and facilities of the units of the former Institute of Aviation Medicine based in Fuerstenfeldbruck, Manching and Bueckeburg together with those of the previous Office of the Surgeon General of the German Air Force and the majority of those of the previous advisory services within the command units based at Cologne-Wahn. The Flight Physiology Training Centre with its large-scale equipment typical for aerospace physiology, such as human centrifuge, high altitude simulation chamber and disorientation trainer, is currently located in Koenigsbrueck, close to Dresden in Saxony.

The AFCAM also incorporates the flight surgeon units in the wings of the German Air Force is additionally responsible for deployment support, healthcare, logistics, administration and training. In the areas of international and national joint projects, research orientation and quality management, the Surgeon General of the German Air Force has the support of a Scientific Coordinator. The formation of the AFCAM has thus achieved the concentration of specialized assignments, the facilitation of processes and the removal of command structures that were among the main objectives of the restructuring of the Bundeswehr. 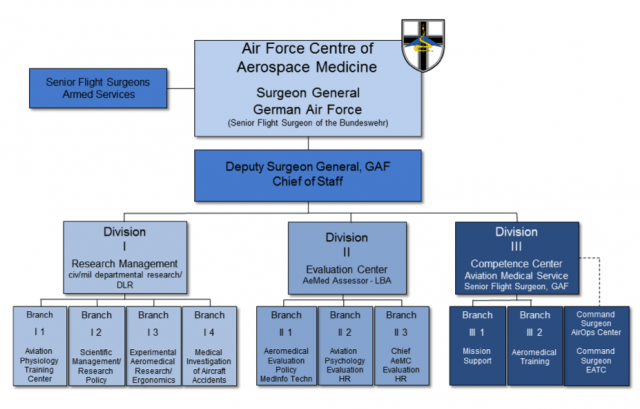 The Flight Medical Service of the German Air Force is responsible for providing flight medicine in all operational air wings, global mission support, health support administration, aeromedical training and medical equipment for our flight surgeon clinics as well as AE (aeromedical evacuation) on board our various aircraft. The air wing’s flight surgeon clinics comprise of flight surgeons, flight surgeon assistants, physiotherapists and sports trainers. They provide medical support as family practitioners of our aviators and air traffic controllers and function as well as aeromedical examiners (AME). Additionally, they support the German AE system as medical director (MD) on board our AE-aircraft. Command, support and guidance is provided by Division III, the Competence Center Flight Medical Service and the Chief Flight Surgeon Air Force.

The Eurofighter wings are stationed at the airfields in Laage, Nörvenich and Neuburg a.d. Donau. Air Group Richthofen at Wittmund is attached to Tactical Wing 31 Boelcke at Noervenich. In order to provide optimum coverage of German airspace, particularly over coastal and border areas, QRA (Quick reaction alert) units are also permanently based at Neuburg a.d. Donau and Wittmund. The wings have been renamed as ‘tactical air force wings’ (TaktLwG) to reflect their multi-role capability, as opposed to the former “fighter” and “fighter bomber” wings.

The reconnaissance units of the Luftwaffe, including its TORNADO aircraft and HALE/MALE UAVs, are concentrated at the Kropp/Jagel airfields in the newly designated Tactical Reconnaissance Wing 51 Immelmann. The Air Force Reconnaissance Training Center is also located here. Fighter Bomber Wing 33 stationed in Buechel retains its previous assignment. The military airfield in Lechfeld is used as an alternative aerodrome as required, with restricted opening times.

The main objective of future air transport involves the amalgamation of strategic and operative air transport capacities. The German Air Force will operate up to 40 multi-role A400 M Airbus transport aircraft and up to 64 medium-lift CH-53 transport helicopters. Because of its central location in Germany and the current framework situation, the main operating base of the A400M is Transport Airwing 62 in Wunstorf, just west of Hannover. Additionally 13 A400M will be stationed in Lechfeld, Bavaria, for the international airlift support of German partner nations. The CH-53 helicopters are combined in a helicopter squadron based at Laupheim and Schönewalde (Holzdorf airfield). Special flight services for the federal government and parliament are provided from Berlin-Tegel International Airport and Cologne Airport by a wing-sized unit (Flugbereitschaft BMVg).

The aeromedical care of personnel who require a pilot license is provided by the flight surgeons within the wings of the individual military formations. Flight surgeons support flight operations, provide flight safety services and flight physiology training, and are responsible for the aeromedical health of flight crews. They advise their wing commanders and all their superior Air Force officers on matters relating to aviation medicine and general healthcare, and with their specialist medical skills they contribute to the success of training, exercises and missions of airborne military formations. The Flight Medical Service of the Bundeswehr ensures that the health of flight crews is such that they retain their operational capabilities. Extensive aeromedical support, regular examinations and evaluations of the aptitude, suitability and ability of personnel with regard to their assignments help reduce health-related risk factors among flight crews to a minimum.

The aim of all aeromedical measures is to establish and maintain the best possible level of operational capacity, flight safety, morale and health among aircrews. They improve individual resistance to stress and optimize performance capacity, enhancing the ability of air crews to act appropriately in threshold situations and thus providing for sustainable efficiency and – in particular – safety during flight operations. Flight medicine, as provided by flight surgeons in operational flight units, combines aspects of clinical aeromedicine, flight physiology, flight psychology, physiotherapy, sports, nutritional and occupational medicine with direct experience of flight operations to form an integrated sub-process of health provision within the overall healthcare requirement.

Appropriate and continuous aeromedical support is also an essential factor in successfully maintaining military flight operations at a deployed operating base. Special requirements thus apply with regard to the training, motivation and proficiency of flight surgeons stationed in the field. A deployed flight surgeon must also be capable of acting as Aeromedical Evacuation Coordinating Officer (AECO), providing the aeromedical expertise required by the casualty evacuation chain.

A flight surgeon must have the abilities required to perform the duties of the Medical Director (MD) in all TacAE und StratAE missions and, like the civilian senior emergency physician, to coordinate the civilian emergency medical services during airborne evacuation. A Medical Crew Chief (MCC) is at hand to assist the flight surgeon. The flight crew also includes the Medical Device Technician, whose job it is to ensure that onboard medical equipment and material are both functional and safe. The direct medical treatment and monitoring of wounded, injured and sick personnel being transported by aircraft is provided by the specialists of the Bundeswehr Joint Medical Service.

In order to ensure the best possible medical results for the patients in accordance with the fundamental guideline of the Bundeswehr Joint Medical Service, a particular focus is placed on AIRMEDEVAC as a significant component of the evacuation chain. For this purpose, the German Air Force has a proved and tested system in place, which consists of various kinds of aircraft with different medical equipment, an aeromedical transport command system, and established standard operating procedures. The introduction of the A400 M Airbus with its enhanced capacity and operational potential represents a significant extension of the spectrum of aircraft that can be used in STRAT- and TACAIRMEDEVAC missions.To provide for strategic aeromedical evacuation worldwide, the German Air Force additionally maintains an A310 MRTT Airbus with full medical configuration and the corresponding personnel in rapid response status at all times. In 2021 the Airbus A310 will be replaced by the A330 of the MMF, the Multinational - Multirole Transport Tanker -Fleet, stationed in Eindhoven, NLD and Cologne, DEU. The aircraft in AE-configuration of the MMF will be stationed only in Cologne and tasked by the EATC (European Air Transport Command). In its maximum configuration the A330 will be able to carry up to 6 intensive care and 16 intermediate and low care patients. 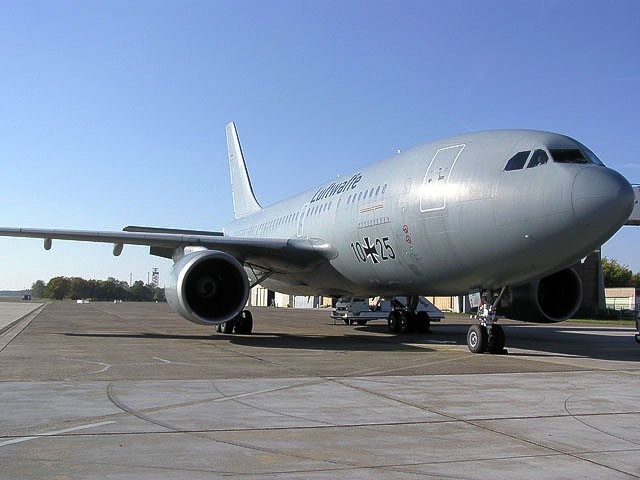 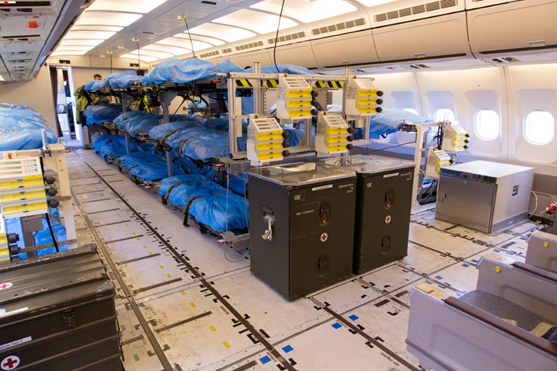 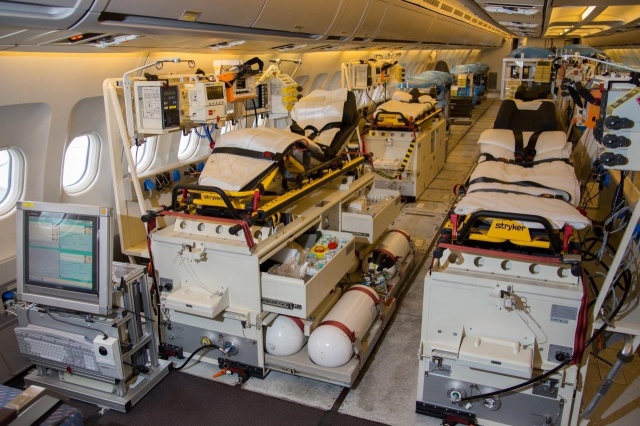 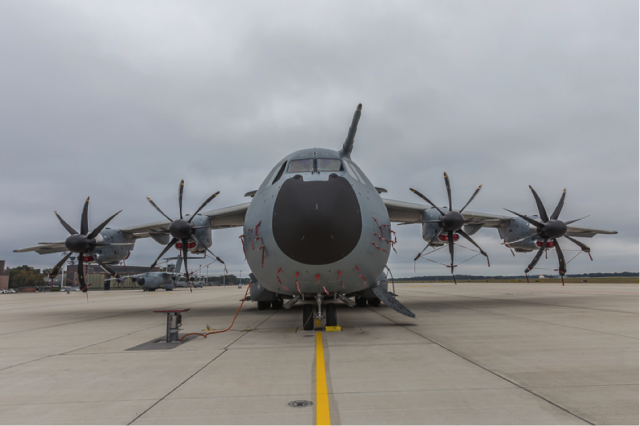 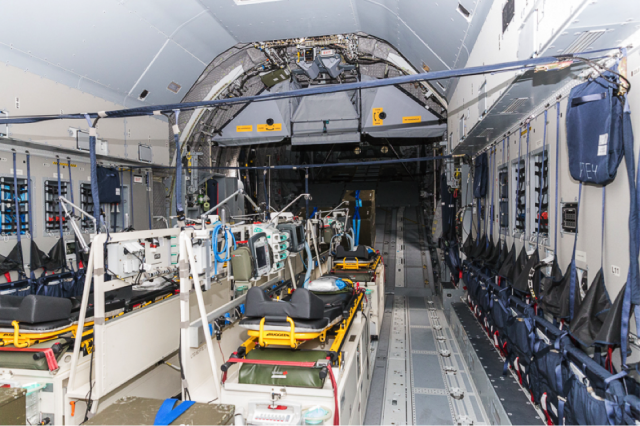