Mission: The Directorate of Health of the National Armed Forces coordinates the provision of care and operational health services in promotion, prevention, recovery and rehabilitation for members and beneficiaries of the military forces health subsystem, by means of its military healthcare facilities. 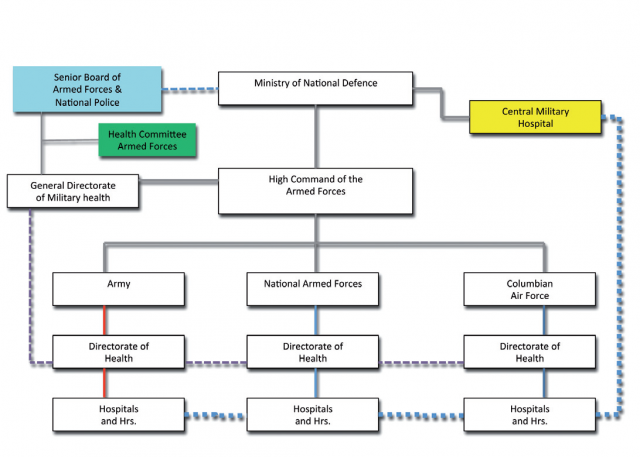 Vision: For the year 2014, the Directorate of Naval Healthcare and its establishments will adopt a care and operational model that will focus on the risk and integral care proposed by the General Directorate of Military Health, conforming to the quality attributes defined by the provision of healthcare services, to the members and beneficiaries of the military forces health subsystems. 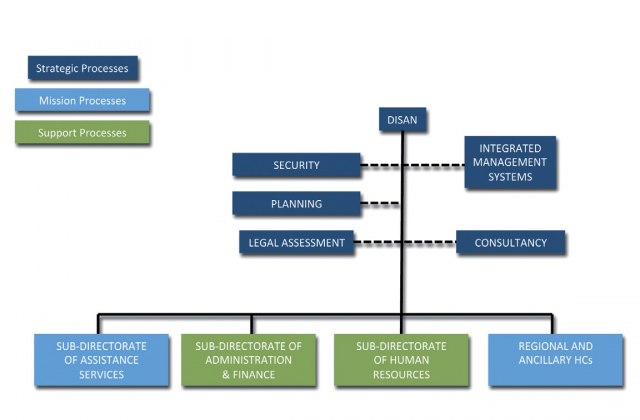 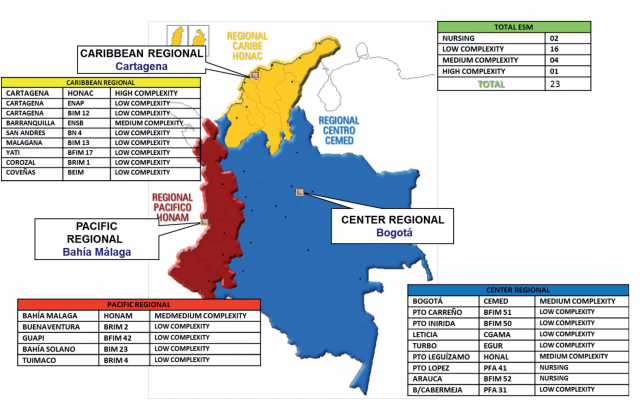 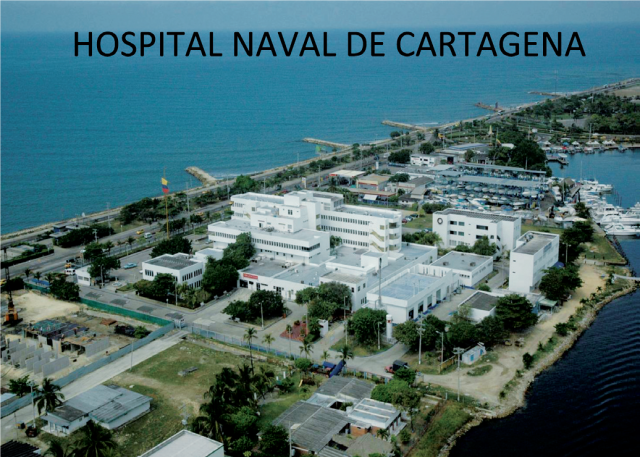 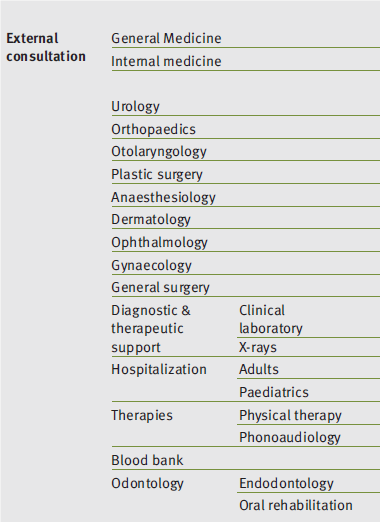 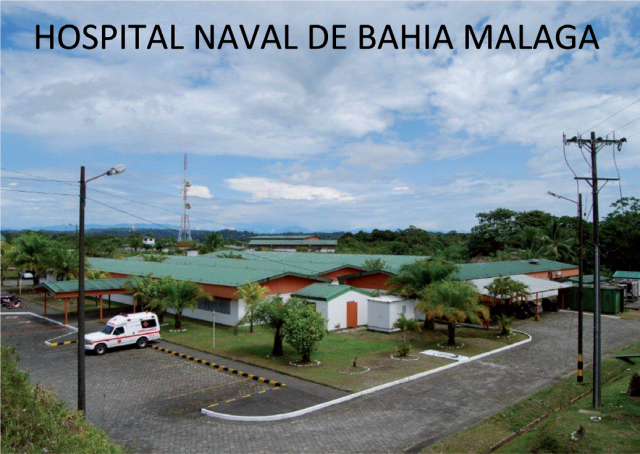 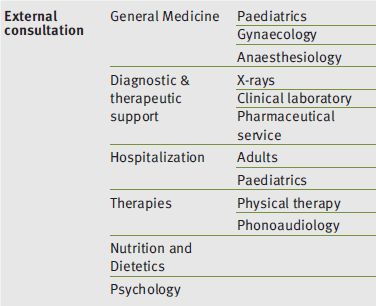 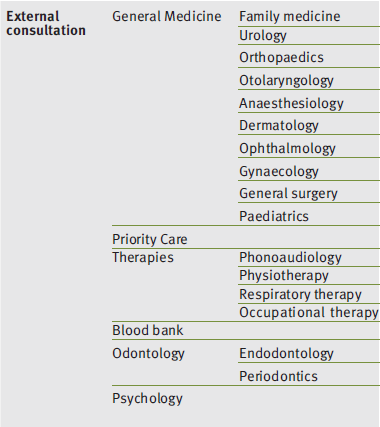 Training
Training for medical officers, dentists, bacteriologist and psychologists takes place in specialisms relating to each profession. Specifically, medical specialities are studied in the Military University of Nueva Granada (Bogotá), whose practical centre is the central military hospital. Senior officers are seconded to this university for their studies. Professional health service staff undertake coordinated training accredited by the AHA (American Heart Association) in advanced adult and child resuscitation, and in Advanced Trauma Life Support (ATLS) accredited by the American College of Surgeons. Our nurses undertake training in Pre-hospital trauma life support (PHTLS) accredited by the National Association of Emergency Medical Technicians. Each year, the Naval Directorate of Health trains officers, NCOs and marines in battle trauma first aid, medical planning and intelligence via courses in combat nursing and becoming medical technicians, with the aim of dealing with wounds and injuries in the theatre of operations. In the course of 2014, it will train 550 men as medical technicians and 100 combat nurses. Due to this training there is expected to be a medical technician for every 10 men and a nurse for every 40 men in the front line. Similarly, 2015 is planned to include the first international training for medical technicians, which is expected to see participation from a number of South American countries. 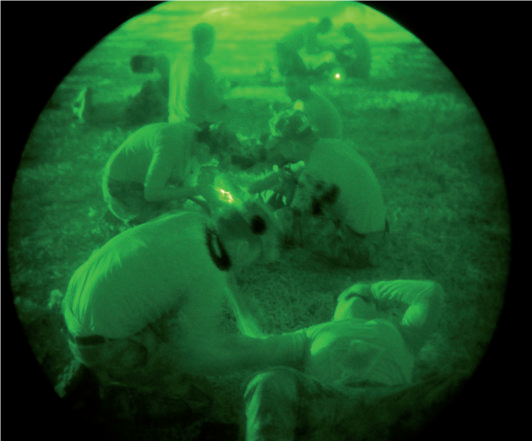 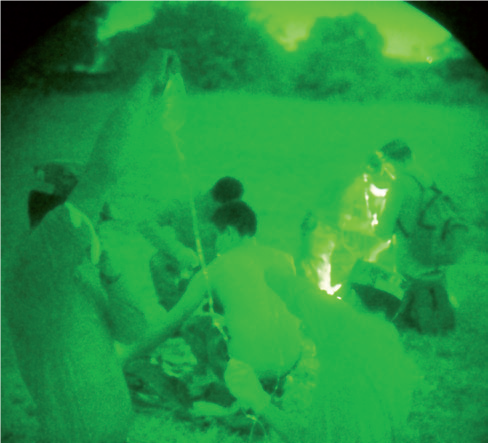 Treatment chain for wounded soldiers
The removal and evacuation of wounded and sick personnel from the theatre of operations to the closest medium or high complexity health care facility, depending on the patient's clinical condition, is coordinated horizontally between the commanders of the land and fleet units, managers of health centres (HCs), regional managers, naval aviation operation managers, army aviation or Air Force, with these movements immediately notified to the Directorate of Naval Healthcare. Should the patient need to be transferred with help from Naval Aviation or the Colombian Air Force, the HCs' medical officers justify the requirement for the air transfer, the aircraft type and the need for medical accompaniment during the move directly to the head of naval aviation operations. These communications are made by telephone, satellite or other official  communication methods (unit operation centres, force operation centres and National Army Command operation centres). 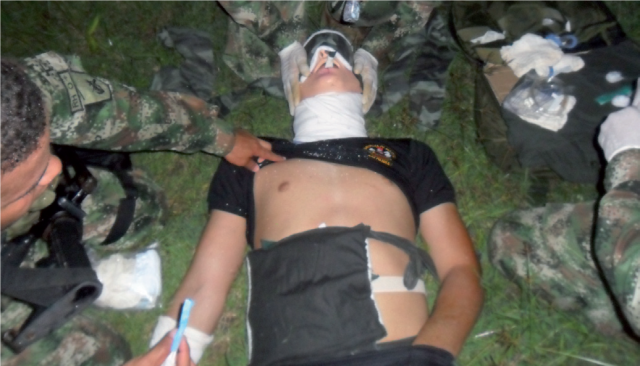 The procedures described apply exclusively during the removal, evacuation and transportation of staff who become injured or sick during the course of military operations. 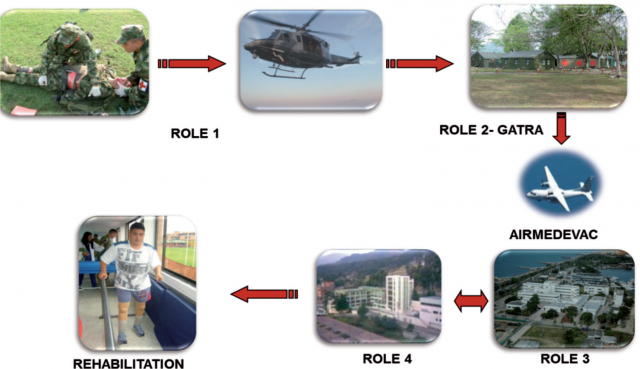 In those regions of the country where no military health centre of medium or high complexity care is available, hospitals within the external civil network are contracted to care for the different conditions that require specialist care. The Columbian National Armed Forces, in coordination with the Peruvian Armed Forces, annually undertake bi-national operations, with the primary aim of bringing healthcare to 108 townships in the departments of Putumayo and Amazonas, benefiting approximately 10 000 civilians. Three Columbian naval officers participate in this operation within the specialisms of general medicine, dentistry, bacteriology and equally they rely on the naval nursing services that provide care in vaccination, promotion and prevention. Similarly, during 2014, the Colombian Armed Forces frigate “ARC Almirante Padilla” participated in the RIMPAC operation, in which 23 nations carried out exercises with the aim of strengthening their capacity for humanitarian disaster relief, maritime control and complex naval operations in the areas of antisubmarine warfare, surface warfare, anti-air combat and amphibious operations. One medical officer took part in the operation as part of the crew, to handle any medical situation during the operation.

Other Special Aspects
Investment plans (2015–2018)
The Naval Directorate of Health, as part of its 2015–2018 investment plan, allocated a total amount of resources of 75 590 000 000 pesos, with the aim of improving the infrastructure of 18 military healthcare facilities, increasing the capacity to provide health care by implementation of the tele-medicine programme at a national level, the acquisition of a new hyperbaric chamber for the Cartagena Naval Hospital as well as construction of its administrative centre and the acquisition and commissioning of the paediatric ICU and neonatal ICU, along with the acquisition of an ambulance launch and an intelligent operating room. This plan also includes the acquisition of an intelligent operating room for the Barranquilla healthcare facility and refurbishment of the odontological centre at the Naval Medicine Centre.
In addition, this four-year investment plan includes construction of the ARC-FAC Medical Dispensary at a cost of 19.763.000.000 pesos, construction of the new Turbo healthcare facility at a cost of 6 000 000 000 pesos and the programme to improve the infrastructure and equipment at the National Armed Forces Directorate of Health, for an amount of 7.932.000.000 pesos.