In the year 2000, the personnel of all medical corps of the branches of the armed forces were combined into the Bundeswehr Joint Medical Service. The only person left in the individual branches of the armed forces were those who have to enter into a close long-term relationship with the troops to be cared for in order to ensure their medical care.

Accordingly, the mechanized forces of the Army in the form of two divisions with three brigades each receive medical care on all levels during basic operations and when on assignment by forces of the Joint Medical Service. The mechanized divisions are supplemented by forces of the Rapid Response Forces Division (RRFD). This division controls an Airborne Brigade (Bde) with two parachute assault regiments, one Army Aviation Bde equivalent with two transport helicopter and one attack helicopter Regiment and the Army Special Forces. With the integration of the 11 Airmobile Brigade (11 LMB) NLD into the RRFD as part of the DEU/NLD cooperation, the Division brings together the skills of the German Army and the Royal Netherlands Army (RNA), which are required for a rapid response, air mobility and for the execution of special and Air Manoeuvre Operations. Owing to this special requirements profile, the RRFD has its own DEU/NLD airborne and air-mobile medical forces on medical Role 1 level which ensures qualified initial general and emergency medical care during training, exercises and when on assignment.  The Division Surgeon RRFD for this purpose is tasked with the responsibility as Medical Advisor for the common DEU/NLD medical support to RRFD operations. The RNA has one Medical Planning Officer within the Division Surgeon’s Office for this purpose.

The Surgeon General of the Army is located in the German Army Headquarters and advises the Army Commanders directly on medical service matters and those relating to the Medical Services of the Army. All Corps and Division Surgeons, the Flight Surgeon of the Army, and the Senior Medical Officer in the Army Training Command work under his command.

Medical service command and advisory elements (corps, division, brigade surgeons as well as Senior Medical Officers) are provided in the subordinate command authorities, as well as at the division and brigade level. They advise the respective commanders on all medical support matters and are responsible for the planning, control, coordination and monitoring of the measures for ensuring the deployment readiness and support services of the Medical Corps. As Senior Medical Officers, they lead the medical service of the unit, which is technically assigned, to them during deployment. The Division and Brigade Surgeons have an important interface function with the points of contact at the Bundeswehr Joint Medical Service. This ensures that the specific interest and needs of the Army and the Bundeswehr Joint Medical Service are mutually agreed and coordinated.

The Medical Service of the RRFD works under the command of the Division Surgeon. The Special Operations and Air Manoeuvre Forces of the Army are located in this division. The potential deployments of the RRFD are characterised in particular by a high degree of mobility, air mobility, a high level of threat, the bridging of large distances with an appropriate distance to their own troops, surprise, speed and secrecy.

The specific characteristics of Army Special Operations and Air Manoeuvre Forces training, exercise and deployment are taken into account in medical services support, so that in the two paratrooper regiments of the Airborne Brigade and in the SOF their own medical personnel are organically deployed to support the troops. 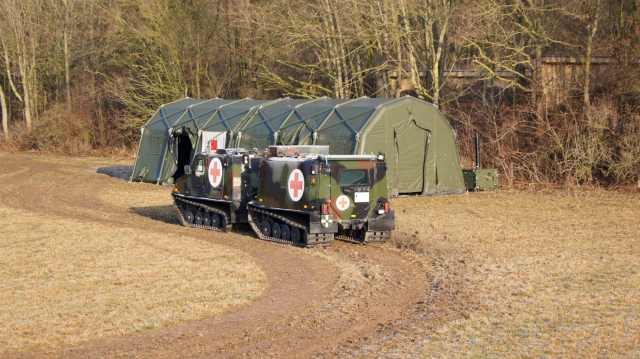 The two independent Airborne Medical Companies of the Paratrooper Regiments are commanded by Medical Staff Officers. They each have an airborne patient treatment platoon, two airborne rescue platoons and their own Patient Evacuation Coordination Cell (PECC). The ability to parachute jump is an essential precondition in order to be able to follow without restriction the parachute regiments, which are to be supported in all deployment types/options. For this reason, both Airborne Medical Companies are fully capable of parachute jumping.

The SOF provides personnel to carry out special operations such as hostage release operations (HRO). As a rule, such operations are carried out under conditions where it is not possible to rely on the existing medical infrastructure of the country in which the deployment is performed. The structure of medical service support in the SOF takes into account these framework conditions. In the SOF staff unit, there is a Medical Services Branch under the command of the SOF Command Surgeon. This branch ensures not only the provision of advice to the leadership of the unit but also the detailed planning of medical service support for special operations and the technical management of the organic medical personnel of the SOF. The SOF has a medical clinic, which ensures not only medical care during peacetime operations, but also the provision of medical support for a wide range of deployment options up to Role 1 level during training and exercises. 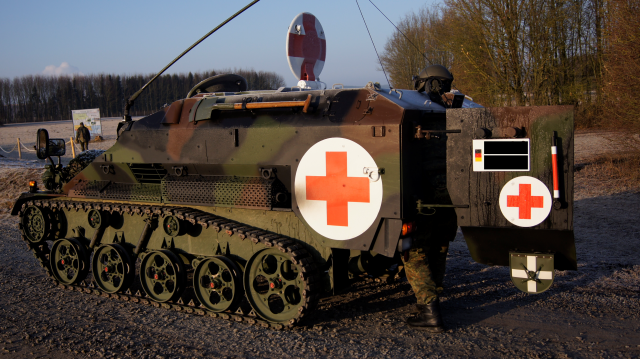 The option of being ready for deployment in special operations anywhere in the world is only made possible by the broad and in-depth training of everyone involved. The forces providing medical care must be aware of the effects of excessive heat in the desert, tropical conditions or extremely low temperatures in Arctic latitudes in the same way as they are acquainted with the clinical pictures and specific features of the respective climate zones.

The Aeromedical Service of the Army

To fulfil these main tasks, Flight Surgeon Groups are integrated into the three Army Aviation Regiments of the RRFD, the International Helicopter Training Centre and the Air Mobile Training Centre. 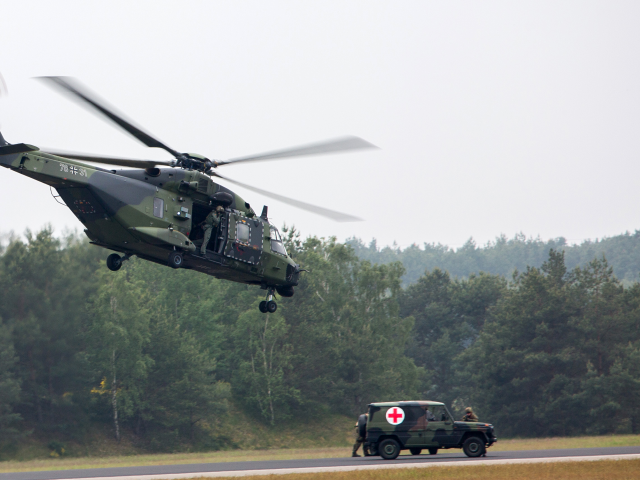 At the training facilities, the next generation of commanders receives extensive theoretical and practical training in the integration of medical service personnel and resources into the conduct of operations – from the group to brigade level. Furthermore, defined personnel receive special medical and paramedical training. Here, mutual understanding and knowledge of one another are particularly important. Medical service training by qualified instructors is therefore integrated into all training facilities. The priorities in medical service training are set at the Army Officers' Academy, the NCO School of the Army and the Army Combat Training Centre. The Specialized Operations Training Centre represents the training facility of the Special Operations and Specialized Forces of the Army. Against the background of the particular tactical framework conditions in Special Operations, the ability of the deployed soldiers to provide extended self-and buddy-aid at a highly specific level is indispensable. Therefore, the forces of the Army used in Special and Specialized Operations are trained as “Combat First Responders (CFR)” on qualification levels A to D. The defining feature of this special training is the embedding of emergency medicine aspects in the deployment principles and methods of the Special Operations and Specialized Forces.

Military Experts on Mission, OSCE observers and UN observers, civilian specialists (NGOs), as well as journalists or chemical weapons inspectors, also receive training in advanced self-aid and buddy care at the Training Centre of the Bundeswehr for the United Nations.

The Pack Animal Centre belongs to the 23rd Mountain Infantry Brigade and is commanded by a Veterinarian Staff Officer. It supports the Mountain Infantry Brigade and other military units in all conflict scenarios in difficult to extreme or difficult to access terrain, including high altitudes and extreme climatic and weather conditions, with its mountain pack and riding animals, which are capable of carrying out transport and delivery tasks. During deployments and basic operations, it ensures the veterinary care of the animals and their correct shoeing. 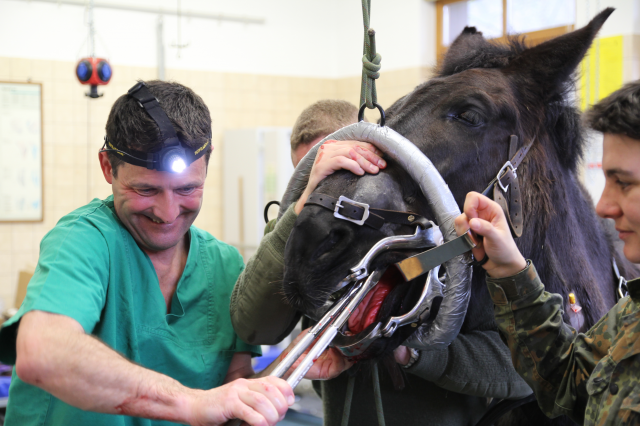 Tooth extraction of a sedated mule

The concentration of the medical services in one Bundeswehr Joint Medical Service has brought with it a significant improvement in the quality of medical service care and made it possible to guarantee such medical support during operations over the last few years. At the same time, it has provided the Army with room to develop a highly specialized Role 1 medical support for the special operations and specialized forces.

In addition to the further improvement of the quality of care, the focus in the future will be in medical support within the Collective Defence. The increasing demands placed on mobility with simultaneous protection during the assignments of Airborne/SOF and regular Army Ground Forces with the view towards NATO defence planning has to be taken into account in order to continue the high-quality medical care for the Special Operations, Specialized Forces and regular Army Ground Forces wherever their assignment takes them.