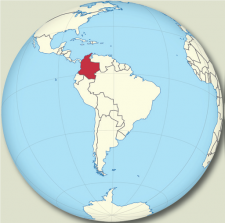 The Military Health Subsystem of Colombia’s Forces is an agency of the Ministry of National Defense that provides health services to military staff on active duty, retired and their dependents. Likewise, the mission is to support military operations on land, sea, river and air of the Military Colombian Forces deployed throughout the national territory, providing a comprehensive health service. Those actions are aimed at strengthening operational health, health promotion, disease prevention, recovery and rehabilitation, in order to improve the quality and lifestyle of the staff under their responsibility. The provision of health services is developed under a model with a risk approach and comprehensive health care with quality attributes to its users.
For military personnel, the Operational Health is an essential part of Military Health Subsystem because it provides a continuum of care in all the dimensions of well-being related with physical and mental health, which allows for compliance with the physical standards of the commissioned officers, non-commissioned officers (enlisted) and soldiers in the armed forces to deal with military operations. 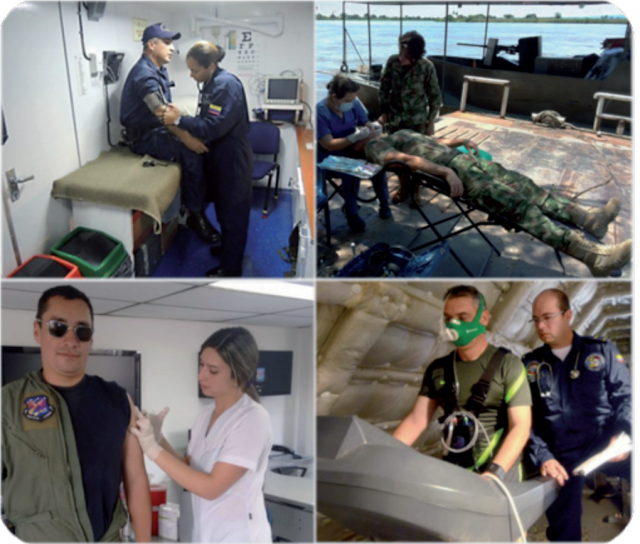 This is done by an analysis of health risks of the theatre of operations, taking as described in the current regulations (Health in Campaign, Naval and Diving Medicine, and Aerospace Medicine), intervening the risks through the three main axes in Operational Health (Appreciation and Analysis, Medical Planning and Medical Logistics in operational health), based on research and continuing education of health personnel involved in health care. 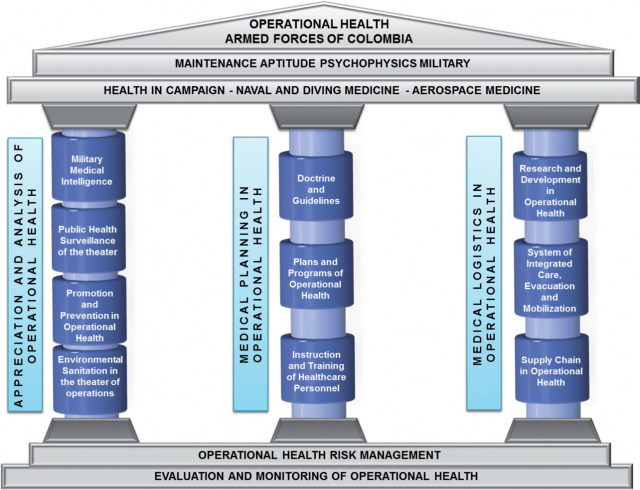 The Strategic Management, monitoring, evaluation and continuous improvement of activities in operational health is developed by the Directorate General of Military Health, based on the generation of guidelines in health that are deployed in the Departments of Health of the Army, Navy and Air Force, according to the specific operating conditions of each Force, through call centres or military health establishments willing nationwide.

The Departments of Health of each Force, behave as a forwarder of the guidelines, because they have the resources and human talent needed, qualify for cover the health care requirements of the approximately 681,000 users of the Military Health Subsystem, where 254,381 are military personnel on active duty. 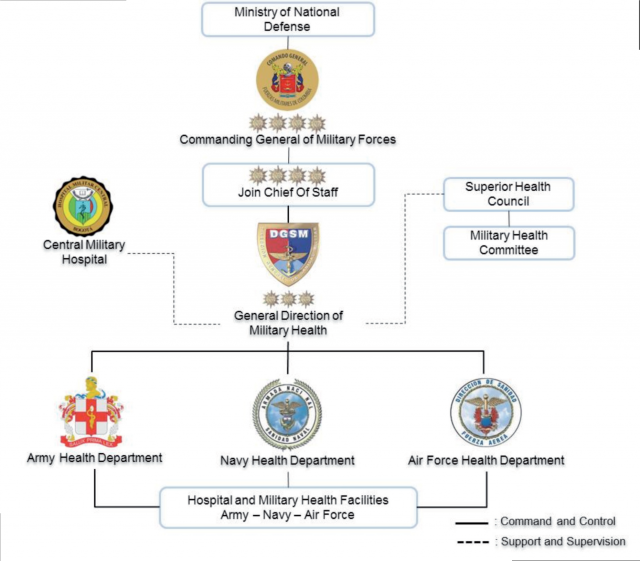 Structure of the Health System of the Military Forces of Colombia 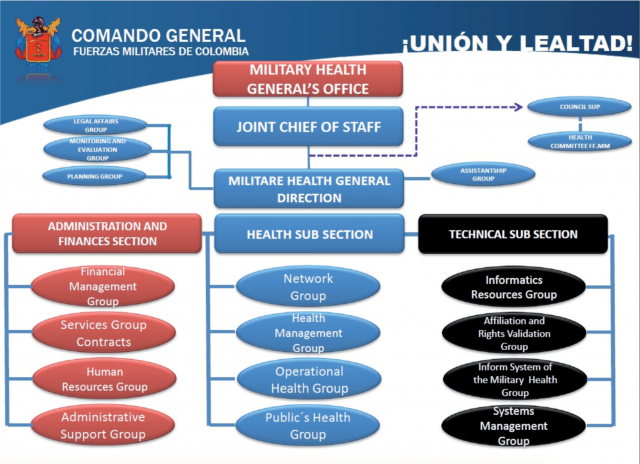 Military Hospitals and Military Health Facilities
Nowadays, the main objective of military health in the theatre is to preserve the combat manpower of the Armed Forces. This mission is accomplished by providing an efficient and functional health care system, perfectly jointed and integrated since the very moment when military personnel are wounded or sick in the theatre of operations, through the successive stages of prehospital medical care until a hospital facility that can provide definitive care and rehabilitation for the injury/disease-specific, in a timely manner secure, efficient, coordinated between the branch and the National Personnel Recovery Center - CNRP, showing a functional integration work and rational use of resources.

Support of other military health establishments strategically located and higher levels of complexity is received. These are the regional hospitals, which have the technical and scientific capacity to support care resulting from exposure to the operating environment and health services for the target population (household).

As a complement to the structure of health care provided, the Central Military Hospital, which has the higher-level response capacity, intended to provide a full range of medical and specialized services with extensive experience in managing the war trauma. 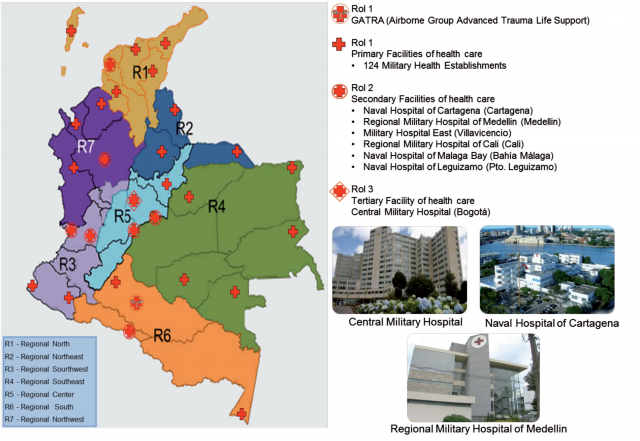 Training for assistant/nursing personnel
The General Direction of Military Health in coordination with the Departments of Health in the Forces (National Army – National Navy – Colombian Air Force), leads the organization and development of the course “Instructor of Military Rescuer”, which is aimed at military staff in the area of the primary responsibilities of health. The course focuses on increase the teaching skills by Instructor of Military Rescuer, in order to strengthen the core competencies of an instructor by using methodological tools such as workshops and practical exercises to strengthen knowledge and explore different techniques to optimize the process training. This personnel are trained like Instructor of Rescuer Military will prepare militaries who conduct activities as first responder health in trauma war, providing immediate aid and assistance in health, too sick or injured persons in the field of military operations.

In 2016 intensity of course is increased, the methodology has been perfected as well as improved logistics for the course development. The advancement of this course, allowed between 2014 and the first half of 2016 have been trained 151 non-commissioned officers as instructors, who have trained 3,110 soldiers belonging to the operational units of the Armed Forces of Colombia.

The challenges continue in the new scenario we expect from peace negotiations, in which the Military Forces of Colombia must continue to fulfil its mission, intervening new phenomena of crime and represent a threat to security. The Military Rescuers are those who continue to provide care personnel involved in the development of military operations. The General Direction of Military Health will continue training personnel for the effective response to the care needs in the multiples theatres of operations that arise. 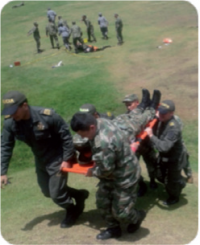 Since 2002, is deployed nationwide the Advanced Trauma Life Support Airborne Group – GATRA (for his initials in Spanish) in response to the offensive of the military forces against the drug-terrorist organizations.

The philosophy of the Advanced Trauma Life Support Airborne Group is summarized in the organization of an interdisciplinary health group accompanying military operations, with resilience and mobilization of human resources, materials and equipment, allowing prompt attention of vital emergency, damage control surgery and preparation for the transport and evacuation of wounded personnel in a timely manner, to a health establishment of a higher level of complexity, or external network hospitals, according to their medical requirements.

Successes in saving lives have identified this group as an important part of integrated care, medical evacuation and transfer system, which articulates with the National Personnel Recovery Center (CNRP) and the Military Health Establishments of the third level of care, external network hospital and/or Central Military Hospital, in order to optimize the use of available resources and capacity, reducing mortality and subsequent sequels in the injured personnel into combat with it.

The tactical evacuation procedure (CASEVAC) and medical evacuation (MEDEVAC) prior assessment of the health status of the patient is performed. The development of such missions often requires coordination between the three branches, in order to provide the most suitable land, water or air environment, taking into account the medical condition of the injured soldier and operational status of the area where the patient is located. Search and rescue missions in a normal situation (SAR) or under fire (CSAR) are performed; these missions are carried out by operational units of the National Army, National Navy or Colombian Air Force. During the past few years, the armed forces have been strengthened with pressurized and unpressurized medicalized aircraft which conditioned exclusively for transferring patients from around the country, with greater range and speed for commuting, which are intended for use as air ambulances, which have onboard specialized aeromedical transport with high-tech equipment, complying with the human resources requirements stipulated by law. Also, with exclusive destination the UH60L helicopters and utility aircraft like the C-90, C-130, C-295s and CN-235b.

In the last decade, they have made 12,241 mobilizations of military and 2,664 civilian patients for a total of 14,905 transferees who have been victims of armed conflict, natural disasters and medical emergencies. 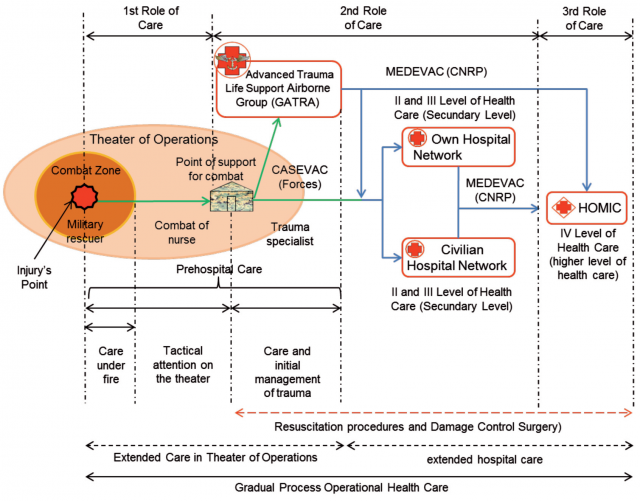 Civil-military cooperation made by the Military Health of the Armed Forces of Colombia has been evident in the developed successful national and international tasks, such as humanitarian aid missions in the Haiti earthquake in January 2010 level and the humanitarian emergency in the earthquake in Peru in August 2013. The experience gained by the Colombian military doctors in the care of trauma patients has allowed them to work together with their counterparts from the US, Canada and Israel, in field hospitals organized by these countries in disaster areas. 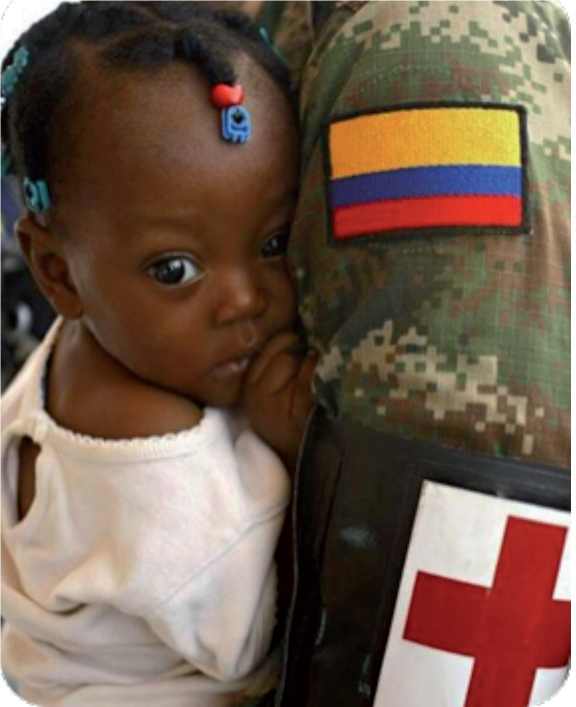 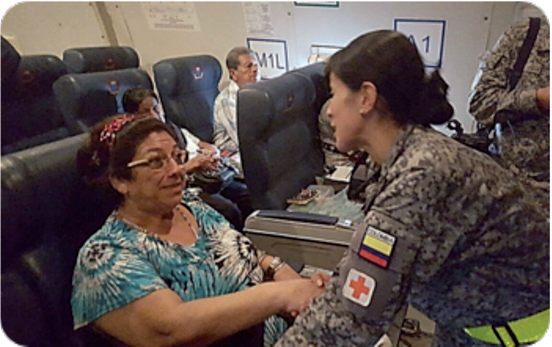 Health officer during humanitarian action in Haiti 2010 and Ecuador 2016.

During the earthquake that occurred in Ecuador in 2016, the Armed Forces supported the aeromedical transport the wounded bound for hospital and homeless destined to major cities in southern Colombia. Similarly, basic care team supported the work of the aid station ambulatory care established by the disaster relief entities sent for the National Government of Colombia. 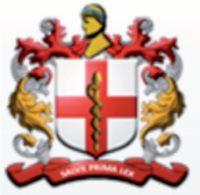 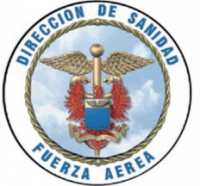