Summary
CST (Certified-Science-Training) Life Sciences is a joint project by the Charité in Berlin and the German Military Medical Corps that will search for, evaluate and certify educational contents with relevance for the organisation, the methodology and the communication of science within the life sciences in order to improve the scientific base of civilian and military medical activities.

The Charité – the medical faculty of both the Humboldt University and the Free University of Berlin – is one of the largest medical schools and research institutions in Europe. Quite a number of scientific achievements - some found worthy of a Nobel prize - have been achieved here. The modern Charité builds on this past to establish a life sciences environment unparalleled in its history.

Every year between 600 and 700 candidates pass the doctoral exams at the Charité – physicians, dentists and other life scientists. Quite a few of these young scientists serve in the German military – just like Rudolf Virchow and Robert Koch who both held military ranks while working here. The friendly relations between the two institutions continue to this day.

The Charité has been faced with the challenge to improve the quality of its scientific output and to establish a sounder base for clinical decision making. In this effort it joins great institutions all over the world. The implementation of reliable scientific data in daily clinical management has been the focus for quite some time - evidence based medicine is the proper term. But change is also necessary at the level of the preclinical sciences: „Scientific illiteracy“ describes the inability of large parts of the health community to understand – and properly communicate – results of well performed studies and to discriminate between studies of higher and lower merit. This deficiency has dire consequences for health systems everywhere - in terms of financial and human costs.

The need to educate a larger part of the society to the proper organisation, methodology and communication of the life sciences is thus obvious. With the Certified- Science-Training (CST) environment Charité takes a novel approach in that it adapts an established tool to that end - the Continued Medical Education (CME) scheme used to upkeep the knowledge of practicing physicians in Europe and the US. The German military medical corps has embraced the CST concept and decided to join the Charité in this effort. The project is supported by the Berlin Board of Physicians and scientifically monitored by the Max Planck Institute of Human Development in Berlin. It is in line with European Union initiatives to develop innovative concepts for the third cycle of university education as structured in the Bologna process and reinforced in the Bergen communiqué of 2005.

The Certified- Science-Training scheme aims to search for, evaluate and certify educational contents with relevance for the organization, the methodology and the communication of science within the life sciences. It will do so starting with traditional and electronic learning formats from traditional sources such as the Charité itself, its parent universities and the German Armed Forces (Bundeswehr) Medical Academy in Munich. It will quickly expand its search to scientific institutes in the Berlin and Munich area as well as to non-academic sources such as the science driven industry and commercial providers with a compatible business case. Certification is going to be performed by a virtual accreditation council.

Technically, certified contents will be assigned credit points for every 45 minute slot. Users of the CST environment will be able to collect these credit points when studying the courses. There will be an obligatory evaluation of every course by the participants before their points are transferred to their central CST account. Their account status will be communicated to the administrative division of the thesis commission before the thesis enters the review process. (Figure 1) 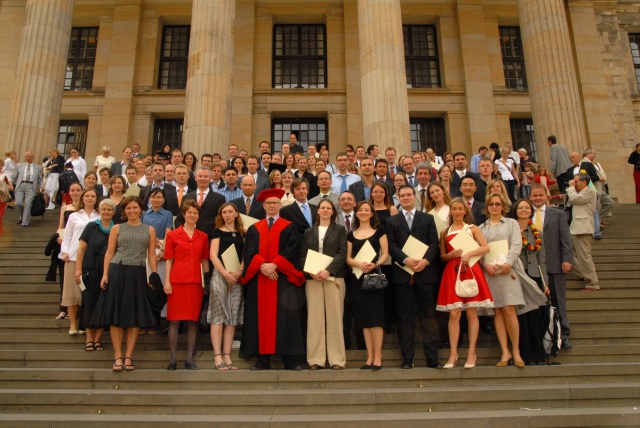 It is hoped that CST certification [DB1]will be perceived by content providers as a significant added value, and that content will increasingly be tailored to the required quality and format –much as has happened in the CME environment of postgraduate physician education.

As the CST scheme evolves, the number of credit points required may be tailored to the thesis type. Established doctoral programs in the life sciences may draw from the CST body of contents thereby lowering program costs. In a next step seed programs using CST courses can be initiated for each type of thesis that have the potential to mature into full-blown doctoral programs. If CST reaches a quantitative level that permits significant ECTS (European Credit Transfer System) ratings the sole recruitment of contents for novel doctoral programs may be considered.

How will CST be financed in an environment of scarce financial resources?

While it must be understood that CST will not finance any courses but only certify supplied contents, the certification will nevertheless produce costs. A significant part of these must in the long term be shouldered by those institutions that profit directly from the scientific work of the young scientists and the increase in quality and quantity of scientific output. That are the participating medical faculties plus the affiliated institutions and associated science oriented industries that use their doctoral tracks. Contents providers who charge users will have to hand on some of the incurred income. Contents providers who are interested in establishing a contact to the target audience will have to contribute to the costs also. The increased efficiency and speed of the doctoral process will also lead to savings on the part of the doctoral candidates – a fraction of which should be reinvested into CST.

CST promises to be an innovative solution to an urgent problem of the third cycle of academic training in Europe – the lack of costly structured doctoral programs. By establishing an overriding doctoral environment using intra-and extra-university resources it will enable a larger number of students to generate more and better science. If successful CST will translate into a significant edge over traditional academic systems