Issues and Challenges of Nepal Earthquake 2015 on Mental Health Services

Issues and challenges in the mental health sector have been brought out at large after the recent Nepal earthquake 2015. Importance of psychologists, counselors, social worker, volunteers and mental health professionals were realized and summoned. Damaged infrastructure, scarce mental health resources; i.e. both manpower and services were significantly evident soon after the massive earthquake.

Fourteen districts of central Nepal including Kathmandu, the capital city, experienced massive earthquakes, measuring 7.8 & 7.3 on the Richter scale on April 25 & May 12, 2015, followed by multiple aftershocks. More than 8844 lost their lives, 22,000 were injured, over 150 went missing and hundreds of thousands lost their homes and property. 90% of the health facilities outside Kathmandu were rendered non-functional and twenty six hospitals were completely damaged in these affected areas. 10% of the approximate 500 patients seen daily at the temporary   health centers reported mental health issues. Many survivors experienced mental health problems.1 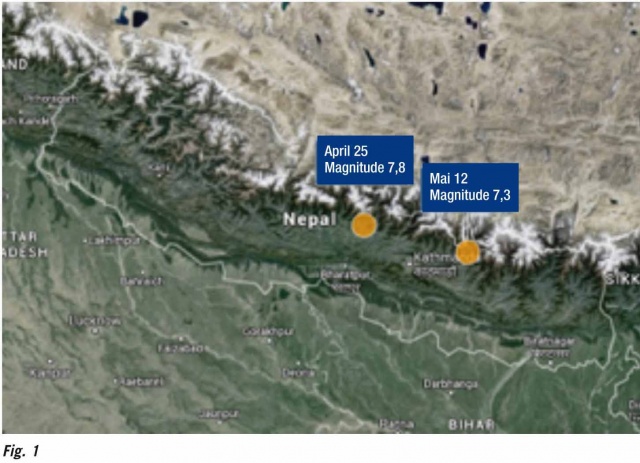 There is limited knowledge and paucity of research in mental health in general and more so in post-disaster mental health conditions. The last major earthquake that affected Nepal was in 1934 and there is limited information on the extent of impact earthquakes can have on mental health. Preliminary research data suggest there is 20% prevalence of mental illness pre-dating the earthquake, in the Nepalese population.2 A study has indicated prevalence to be as high as 37.5% in rural communities.3 Social stigma towards mental illness is significantly high.  Traditional healing practices emphasize mental illness to be caused by supernatural forces like ghost, witches, black magic, sins of previous lives or as a result of celibacy.4 Traditional and faith healing practices are more culturally accepted than professional psychological or psychiatric treatment.

Persons having mental illness in spite of treatment are prone to be stigmatized and discriminated in the society and work places. In the civil code, the legal definition of mental illness is not clarified, but the language of the legislation refers to someone with broken mind or madness. The Chief District Officer has the authority to detain mentally ill people in jail either for their own safety or for the safety of the community by the Local Administration Act of 1972. Therefore today there are more innocent mentally ill people in the jails of Nepal, than there are in the psychiatric wards.4 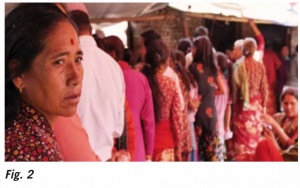 Several research studies have investigated traumatic experiences in a natural disaster setting and its subsequent psychopathology on the victims.5 Previous researches have shown that the effect of earthquakes goes far beyond the immediate physical destruction and mental health repercussions are seen to have lasting effects on the affected population.

Mental health is neither given any priority by the Government or people of Nepal. Till date there is only one hospital exclusively only for psychiatric care though there are four zonal government hospitals outside the capital, Kathmandu which provide psychiatric services.6 Budget allocated annually for mental health is less than 1% of national health budget.6 The government keeps no official record of the mental illness prevalence rates of the country. There are approximately 400 beds allotted for psychiatric care; 0.22 psychiatrists, 0.25 nurses, and 0.06 psychologists per 100,000 people. Over 90 percent of the population who needs mental health services has no access to treatment.7 Whereas there is almost 1 traditional healer to 650 persons.8

Nepal is highly vulnerable to natural disasters, i.e. floods, landslides, epidemics, earthquakes and Kathmandu Valley is situated in one of the most seismically active area. Psychosocial and mental health programs have been initiated by foreign humanitarian aid agencies during disaster and in emergency situations in the past and during the decade old armed civil conflict (1996–2006). Psychosocial interventions were implemented for former child soldiers and families of long-term missing people & refugees.  The Inter Agency Standing Committee Guidelines (IASC) for Mental Health and Psychosocial Support in Emergencies was adopted in Nepal in 2009.9    Though there are limited researches in mental health there are a few studies reported on psychosocial status of displaced persons or those directly affected by past political violence.10, 11 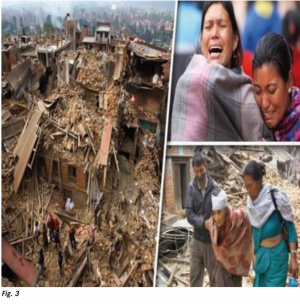 Soon after the earthquake due to damage or destruction of houses people were forced to take shelter outside in the open area. Tents and temporary shelters were difficult to find and hygiene was a matter of concern. The old, ill and children were of the main concern. The first line of help and support came from the local people. People and communities came together to help one another irrelevant of their caste, economic status, ethnic or religious background. Many lived in open and safe places for months after the earthquake due to fear of ongoing aftershocks and unsafe buildings. 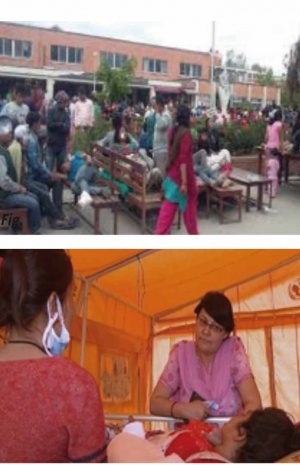 Multiple trainings on Psychosocial aspects in disaster and its management; i.e. Training on Psychological First Aid (PFA), Crisis interventions and stages of trauma, was provided to social workers, volunteers and counselors by international and national psychology experts. Many INGO’s and NGO’s had their trained staff deployed to the severely affected districts. ‘Tundikhel’ the central open ground at the heart of Kathmandu city sheltered thousands of people in tents , was  a safe and secure hub which got the most local and international attention; i.e. food, clothing and health care including psychological interventions. Children received various play and recreational activities. Several websites, blogs, articles, TV interviews, radio programs, media messages helped the public to understand the psychological impact of disaster and how to cope with it. Many national and international cooperate and business organizations organized professional mental health support for their employees. Remarkably there was spontaneous and relentless help and support by the Nepalese people for their fellow citizens.

Department of Psychiatry and Mental Health at Tribhuvan University Teaching Hospital15 immediately established a 24 hour critical incident crisis management help desk and bed to bed psychological services was provided at the triage areas and wards. Psychiatrists, clinical psychologists, nurses and residents promptly provided crisis interventions; i.e. PFA, trauma counseling, necessary psychiatric and nursing care. Bed to bed mobile psychological support was provided. Among others, a total of 165 disaster victims were referred to psychiatry and psychology services from April 25 to July 30, 2015. Psychological first aid, safety, security and aftercare, making linkages with family members and social support and referral to specialist care were provided to the severely injured patients. Most of the clients displayed anxiety disorders; acute stress reaction, ASR (44%), acute stress disorder, ASD (9%), anxiety disorders, not otherwise specified, NOS (18%) etc. Trauma counseling, trauma focused CBT and behavioral interventions were provided. (Fig.5–7) These findings indicate probability of higher rates of Post-Traumatic Stress disorder (PTSD) and other related anxiety or major depressive disorders in near future. Some research work has been initiated on this and the results are awaited.

Dire social and economic conditions of a country often increase the risk of mental health problems. Nepal has many such issues predating the earthquake. Primarily, social stratification, caste-discrimination has been a barrier to equitable delivery of services. Gender-based violence and discrimination has been a barrier to economic, educational, and other development. Huge numbers of youth are migrating abroad for employment purposes. This has brought about vast shift in the social and cultural norms and values.  Human trafficking over the Indian borders is highly prevalent. There have been reports of exacerbation of human trafficking and human rights abuses during the earthquake. Illicit drug sales are rampant in Nepal and a large number of young adolescents and adults are addicted to these harmful substances. Alcohol is also widely consumed in the form of locally or homemade alcoholic drink. The country already bears a high burden of mental illness prior to the earthquake. Political instability has only widened the gap between the haves and have-not, instead of focusing on core mental health issues. 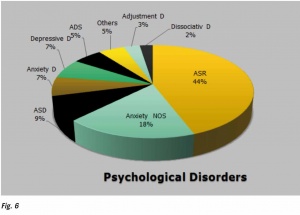 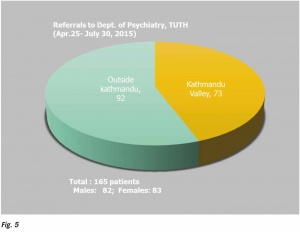 There are significant challenges in the mental health sector. Enormous stigma towards mental illness not only with the illiterate but also among educated and highly qualified people and policy makers has left this field neglected.16 Primary health centers do not have qualified mental health manpower but have overburdened health workers and lack psychotropic medicines and supervision. Epidemiological studies in this sector are grossly lacking. Many of these drawbacks are due to lack of a coordinating body in the Ministry of Health and Population (MoH/P). 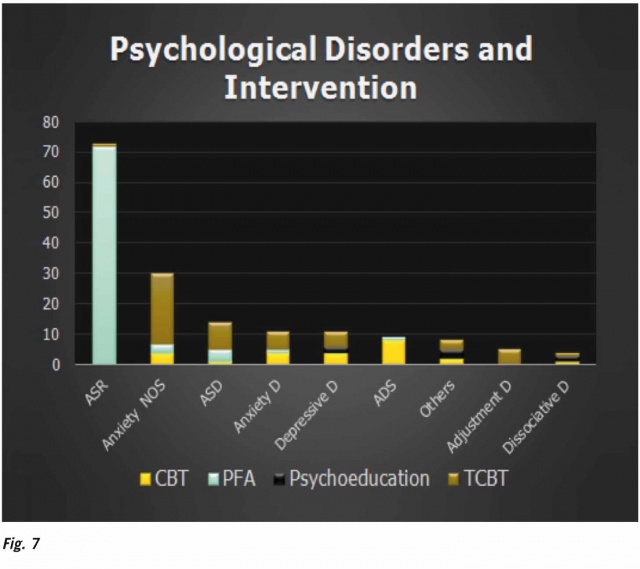 More than one and a half years after the earthquake, the “heroic and honeymoon” period of disaster is over. The country is still in a ‘period of disillusionment” and there has been very little initiatives in the “rehabilitation and reconstruction process”. It is very important for policy makers to understand that psychosocial well- being can only be reached if people have  met their basic needs of food, clothing and shelter and feel safe and secure with their families in their own household and communities.

Acess to mental health services is essential if psychological problems are indicated. MHPSS service has to be available in the primary health care system and in the health facilities in the cities.  MHPSS which have been initiated need constant evaluation and monitoring. Availability to psychotropic medications for the mentally ill and capacity of prescribers, especially in the primary health care system has to be strengthened. Awareness raising programs on mental health in schools, offices, and community and health centers and through media will have immense positive impact. Training and skills development of MHPSS service providers, advocacy and long term planning for MHPSS is vital.  Documentation and enhancing more research work will further develop new frontiers in the field of mental health.

Care for the care providers and curtailing burnout was found to be essential during the disaster period. It is also important that helpers and volunteers especially from a different culture need to be aware and sensitive to the cultural norms, values and language of the victims so that their help is useful and does not harm in the name of help. The 5C’s strategy of. Coordination, cooperation, communication, collaboration and continuation are the key towards sustained reconstruction, rehabilitation and stabilization process.

As much necessity there is of research to determine the prevalence of post-disaster mental health conditions; i.e. posttraumatic stress disorder (PTSD), anxiety and depressive disorders, resilience and factors associated with the impact of event among the survivors there is immense requirement of trained, qualified and dedicated mental health professionals to promote prompt, evidence-based post-disaster interventions in Nepal.