Report: A. B. VAN VUGT (THE NETHERLANDS)

Life- and limb-saving surgery in a level 1 trauma centre can be carried out with almost unlimited resources in western countries. In the austere environment military surgery is well organised up to the level of a role III facility and for allied forces transfer to a role IV facility results in optimal care for the severely injured. However, when local victims are presented to a role II/III facility transfer to a level 1 trauma centre is not feasable, and the optimal medical care available will be the a role III military hospital combined with local facilities. This can lead to adapted medical decision making, taking into account rules of engagement and ethical aspects.
This case presentation demonstrates the potential of life- and limb-saving surgery, including secondary reconstructive procedures. 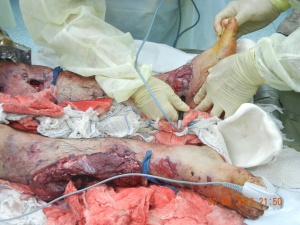 A suicide bomb-attack in the northern part of Afghanistan resulted in multiple fatal casualties and some severely injured victims. Care on scene was carried out by locals, supported by first responders (police, army). One victim was presented to the gate of the military base in Kunduz by military ambulance, with a pre-hospital delay of approximately 5 hours. He was known as a local politician, assistant of the governor who was killed instantly on scene.  Multiple injuries were identified, especially wounds, partially covered by bandages. Within the rules of engagement the victim was accepted for further medical care by the surgical team in the role II hospital.

Primary survey according to ATLS® principles showed a life-threatening condition with both impairment of ventilation and circulation. Initial assessment showed: 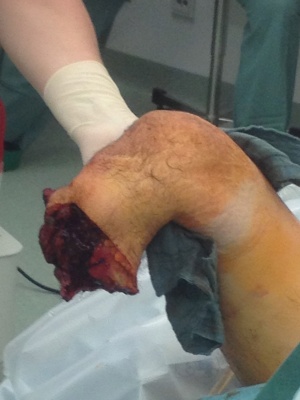 Primary diagnostics were limited to plain thoracic radiology and abdominal sonography. Bilateral lung contusion (blast) without signs of haemothorax, but with subcutaneous emphysema on the left side was seen, and signs of intra-abdominal haemorrhage were excluded.

Resuscitation in the shock room was carried out simultaneously with the diagnostic work-up:

The hypovolaemic shock showed no initial response to crystalloids , but after rapid transfusion of 2RBC a transient response was noticed. Combat Application Tourniquets were applied, but not tightened, immediately after vascular monitoring of both legs (Monophasic Doppler Sounds could be detected on the left leg, no signals were seen on the right side. No  signals of pulsoxymetry could be detected (see Figure 1a).

Additionally X-rays of the left knee/lower leg showed a large defect of the proximal medial tibia and an extra-articular fracture of the tibia with little displacement.

Direct transfer to the OR for damage control surgery was indicated and carried out within 20 minutes after arrival. The following procedures were performed: 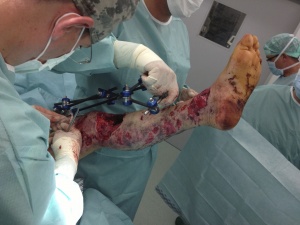 Overall resources in this first period with respect to transfusion and clotting-products used were limited to 6 RBC, 10 Lyoplas N and 2 grams of fibrinogen.

Transfer to the level III facility in Maasar-e-Shariff with a 40 minutes air transport was ordered an took place after a 3 hours intensive care period.

Approximately 10 hours after the impact the patient arrived in stable condition in the emergency room. Airway and Breathing were stabilised, although the blast injury resulted in bilateral lung contusion, predominantly left-sided. Circulation was normal, without signs of persistent bleeding. 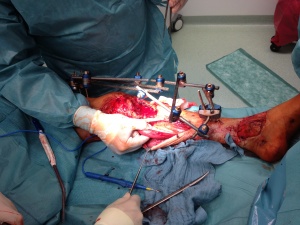 debridement and identification of the medial gastrocnemius muscle

The first 24 hours intensive care treatment resulted in a significant improvement, although thrombocytopenia persisted (31 x 109/l), because the lack of thrombocyte transfusion potential. Thromboelastography showed acceptable clotting condition, therefore a second look in the OR was planned. Debridement of the guillotine amputation of the right leg was carried out, wound closure was obtained by vacuum assisted closure. The same was carried out with the left leg. Only little sub vital tissue had to be resected , resulting in a large bony defect of the proximal medial tibia. The preoperative and postoperative results are shown in figure 2 a-b-c-d.

The intensive care period was turbulent with respect to the ventilation, and multidisciplinary debate aroused about the strategy to safe life and, if possible, limb.

Obviously, the right leg eventually required above knee amputation to be saved in part. The 3b Gustillo compound proximal tibial fracture could be seen as a medical challenge to be solved. The only thresholds in this extreme situation in the first week after admission to the intensive care unit were save life before limb and the limited technical possibilities and resources in the role III facility.

The clinical director seriously expressed his concerns about the limb salvage and suggested bilateral amputation as definitive treatment at this stage. Especially the critical pulmonary condition with ARDS played an important role in the suggested strategy, considering his specific expertise in the field of intensive care medicine. The surgical team and nursing staff however had serious doubts about this treatment option for various reasons. There was quite some resistance also from an ethical point of view:

At this stage, there were uncertainties about the identity of the patient, but with respect to the rules of engagement he was considered to be a civilian/politician of allied Afghanistan origin, presented an accepted for medical care.

According to the adapted 4 step Ethical Decision-making Model (EDM), we discussed these questions. Crew Resource Management (CRM) principles are not only important from the safety point of view in a surgical team, but should be taken into account in such critical more or less semi-elective moments of decision as well. Obviously, an early decision for bilateral amputation would have resulted in serious demotivation of a major part of the team-members. This dilemma was discussed with the clinical director and resulted in the strategy lined out below answering the questions above:

In a consensus model on day 5 the next step was carried out. AK amputation R was performed and the left leg was treated as planned with a local transposition flap of very good quality. Split skin-grafts and remaining open wound were covered by a VAC system). Since prolonged ventilation was expected, a tracheostomy was carried out as well.

Further improvement was seen in the days after this third inspection. On day 8, weaning could be started successfully. Day 10 the 4th inspection took place. The gastrocnemius-flap was vital, SSG was successful for 70 % of the covered area and no signs of infection were seen. A medial plate was added to enforce stability of the proximal tibia, leaving the bridging external fixation frame in place. The AK amputation of the right legs showed good healing after primary closure. 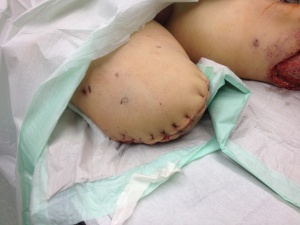 Under intensive care, a rapid progress of the patient’s condition was seen and extubation could be carried out safely on day 12. The patient was transferred to the surgical ward on day 13. In this second week, his mental condition improved as spectacular as his respiratory parameters, and communication was possible with the aid of a local translator. The identity of the patient was completely different from the original estimated situation. He had been on scene coincidentally during the attack, being a tradesman from Uzbekistan. The patient refused further extensive treatment in our hospital and his behaviour towards medical and nursing staff was quite hostile. An Afghanistan surgical team in the local hospital of Balkh accepted him for further medical care. On day 15 the tracheostomy was closed surgically[M7305551] by local transposition (ENT consultant) and VAC dressings were changed for routine bandages. The same day transfer to the local facility was arranged.

Unfortunately we did not receive any feed-back from the Balkh medical team about the follow-up and final result. Although the medical team and nursing staff in the role III were disappointed about the outcome, everybody was convinced we had chosen the optimal treatment strategy. 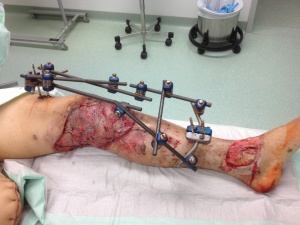 Expertise in secondary procedure, especially soft-tissue management with limited resources does offer possibilities for life- and limb-saving surgery. Surgical skills in damage control surgery, including damage control orthopaedics is the first step to be completed, but local transfer flaps, split-skin graft and vacuum-assisted-closure dressings offer a fair chance even in complex 3b compound fractures.

For motivation of the team, a multi-disciplinary approach is mandatory in which CRM principles should be applied. Not only technical medical aspects, but ethical and humanitarian factors should be taken into account.