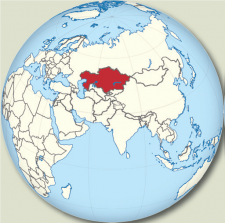 Military Department
The main activities of the military department are to train highly qualified medical reserve officers on theoretical and practical issues of organization and tactics of medical service to the extent necessary to perform their duties in accordance with their purpose at wartime. In this connection, the department pays much attention to inculcate students with the skills to organize the provision of the wounded and sick care at the stages of medical evacuation as well as the ability to work in complex emergencies in peacetime.
After completing the training program for military training, students take a comprehensive final exam and the time of graduation has been validated in the officer corps reserve. During 1979–2014, more than 21,000 officers of medical service reserve had been trained. Many of them serve in the military service in the Armed Forces, in other troops and military formations of the Republic of Kazakhstan and neighbouring countries.

At the military department reserve officers are trained for the following military specialities:
• Organization of the medical providing is in ground forces;
• Medicine in the ground forces;
• General dentistry;
• Laboratory matter of sanitary-hygienic laboratories.

Training / Education
Karaganda State Medical University
The main subjects of military training of students are as follows:
• The organization and tactics of medical service;
• Military toxicology, radiobiology and military protection from weapons of mass destruction.

At the beginning of training, the students are taught basic military subjects: Public Law, general military training and general tactic. Then they study the basic military-medical disciplines: organization and tactics of medical service, medical toxicology, radiobiology and military protection from weapons of mass destruction.

Military-scientific and scientific-research work are aimed at solving urgent problems of military training and education of students, development of textbooks, manuals and guidance documents.