Brazilian Humanitarian Aid for the People of Haiti

Brazil was among the first countries to send aid to the victims of the earthquake in Haiti and still remains one of the strongest supporters of the long term operations. An Inter-ministerial Group coordinated the government aid efforts, which received a prompt response from the whole population, especially from the voluntary health workers.

On the evening of January 12th, a 7.0 Richter scale earthquake with its epicenter near the town of Léogâne struck Haiti causing great devastation to its capital city, Port-au-Prince. It also damaged several government buildings as well as the United Nations Headquarters. An estimated 230,000 dead, 300,000 injured, 1,000,000 homeless, 188,383 collapsed residences and 87,000 destructed buildings was the overall consequence of the disaster.

Considering the country’s 2009 UN development index report and the fact that several government and United Nations (UN) staff members went missing, it is right to assume that this earthquake was one the most devastating natural disasters of our modern world. The international support to Haiti started to arrive within the first 24 hours following the event. It consisted of health professionals, military and civilian field hospitals supplying medical service and equipment as well as, drinking water and food.

The UN Security Council adopted Resolution 1542 (2004) at its 4961st meeting on 30 April 2004 and established the Stabilization Mission in Haiti (MINUSTAH) whose military component was placed under Brazilian command. 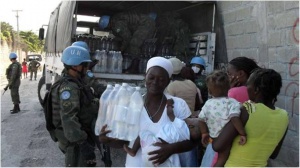 Brazilian Mariners from the MINUSTAH Peacekeeping Force distributing bottled drinking water to the Haitian population. Thus, soon after the earthquake that had reduced Haiti’s Government capability to provide essential services to its population, the Force Commander of MINUSTAH, Major General Floriano Peixoto assumed the control of the military response and started working with the Haitian president, Hené Préval, to reinstate a basic infrastructure in order to guarantee  legal order and security. At the same time, The UN Security Council  increased the strength of MINUSTAH by 2,000 troops and 1,500 police (Resolution 1908 (2010).

The health services of the Brazilian Battalion (BRABATT) and of the Brazilian Mariners Task Group immediately established means to rescue and to offer  first aid care to the victims, however, the overwhelming demand exceeded their capacity of response.

In Brazil, an inter-ministerial group (IMG) was created under the control of the Institutional Security Cabinet of the Presidency of the Republic with the mission to coordinate the Brazilian humanitarian aid to Haiti and to support the needs of the Force Commander. The first measures adopted by the IMG were to

The Role of the Ministry of Defense

The Ministry of Defense was represented in the IMG by the Staff of Defense (EMD) and the Department of Health and Social Affairs (DESAS/MD). The EMD was responsible for the Command & Control of the joint operations while the DESAS/MD coordinated the health aid in conjunction with the Ministry of Health. 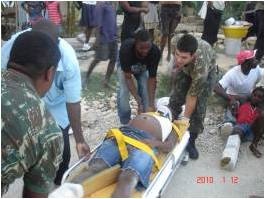 Brazilian Army military personnel rescuing a victim of the earthquake in a street of Port-au-Prince. All the military operations concerning humanitarian aid and the brazilian troops in Haiti were planned strategically by the EMD and tactically by the Navy, the Army and the Air Force Commands.

The EMD developed a database for the documentation, analysis and management of donation offers in accordance with the Haitian needs.

Contributions of the Navy, the Army and the Air Force 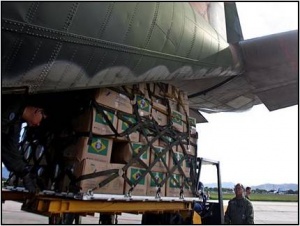 A C-130 being loaded with humanitarian aid supplies donated by the Brazilian population. On January 14th, The Ministry of Defense and the Commanders of Navy, Army and Air Force met with the President of Haiti and announced the Brazilian Emergency Plan to help the country. In the immediate aftermath of the earthquake, the Navy and the Army, which are represented in the MINUSTAH Peacekeeping Force, struggled to rescue the survivors, to maintain public order and to organize the distribution of  drinking water and food.

In the five months following the disaster, the Navy sent the ships NDCC Almirante Saboia (twice) and the NDCC Garcia D’Avila to Haiti loaded with humanitarian aid. The magnitude of damage to the Haitian infrastructure, including the port and the airport of Port-au-Prince, had been the main obstacle to international logistic support. Therefore logistics hubs were established between the Dominican Republic and Haiti in order to facilitate an overland supply route. With the recovery of the airport and the pier of the port, the flow of humanitarian aid improved considerably. 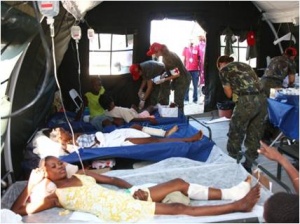 Transport of patients to the Air Force field hospital was intense. 26 health professionals, 16 from the Navy and ten from the Ministry of Health (Hospital N.S. Conceição) joined the health service of the Italian aircraft carrier “ITS CAVOUR” and cruised towards Haiti to assist the rescues efforts.. The Navy also placed two helicopters on the Italian warship for medical evacuation missions (MEDEVAC). The Brazil-Italy joint mission supported the paediatric hospital “Francesca Rava” and provided healthcare assistance in two outpatient tent units nearby Citée Soleil. Over the period of one month and ten days, 1,400 patients were treated and 160 exams performed. 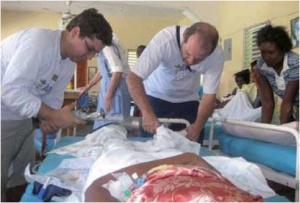 AMB professionals examining a patient in the Brenda Strafford Hospital in Les Cayes. The Air Force operated two to three daily flights to Haiti adding up to 156 flight missions and 3,348 hours of flight. The Air Force field hospital began its activities in January 18th, and by May 13th the facility had already treated 22,745 patients. 1,082 surgical procedures, 2,216 ultrasound and 1,487 X-ray examinations were performed and 6,965 biochemical and haematological tests were processed. In the first two months, the majority of cases consisted of trauma, contaminated open wounds and post-surgery complications. This picture changed in the last three months whith acute and chronic clinical conditions becoming predominant. 339 cases of malaria in the population had also been confirmed in this period. This demanded a study of the potential risk to the troops as well as a discussion of the current chemoprophylaxis and treatment protocol with DESAS/MD and the Ministry of Health.

The Ministry of Health and the Civil Defense assumed an important role supporting the military operations to assist Haiti. Both institutions were responsible for the management of donations throughout the national territory and, in perfect coordination with EMD, the humanitarian aid was concentrated in Rio de Janeiro where the supplies were stacked on pallets and sent to Haiti by military air cargo or ship.

The Ministry of Health (MOH) took part in the technical videoconferences coordinated by DESAS/MD and supported the provision of drugs and other medical supplies to the Air Force field hospital, and sent epidemiologists to analyze the malaria outbreak and to immunize the Brazilian contingent against A/H1N1 Influenza.

The Ministry of Health is now working to support the efforts of the Haitian Government and of the international community to establish a network of alert and response to infectious diseases and structure of epidemiologic surveillance.

The Brazilian Medical Association (AMB) sent three alternating groups; each one consisting of six orthopedists, four anaesthetists, one vascular surgeon, four nurses and one X-ray technician to support the Brenda Strafford Hospital in Les Cayes. In their first month in Haiti, the AMB professionals performed more than 154 surgical procedures which represented an important contribution of the Brazilian medical community to the international efforts towards mitigating the suffering of the people of Haiti.

The earthquake which struck Haiti and whose magnitude of destruction resulted in more than two thousand deaths, countless injuries and a multitude of people looseing their homes. This strained planning and response resources of the international community. Brazil joined several countries in the humanitarian effort to rescue victims, to treat the injured and to restore Haitian infrastructure. The Brazilian government and the Armed Forces endeavored to accomplish not only their mission concerning the natural disaster but also that of the MINUSTAH mandate. The creation of an inter-ministerial group was essential for the coordination of the operations as well as for prioritizing the tasks. The Brazilian population showed remarkable response which can be confirmed by the amount of donations as well as the vivid participation of AMB professionals in Haiti.