The experience of producing drinkable water in an unfavorable campaign environment, as that of Gonaives (Haiti) and getting excellent results in terms of quality of treated water, is the sum of continuous adaptation and improvement of intermediate purification processes, from improving the acquisition to remineralization of water filtered by reverse osmosis.

Looking at Haiti and the disasters this country has suffered (Hurricane Jeanne – 2004, Earthquake - 2010), the military forces involved in the stabilization mission (MINUSTAH), the permanent reengineering of its establishments, and adapting to the new impending humanitarian situations, let us consider one single, albeit very important aspect of humanitarian aid: drinking water. 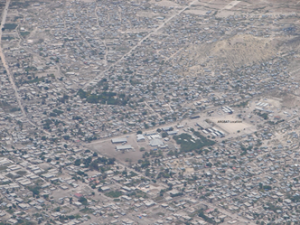 On 30 April 2004, the Security Council of the United Nations, through Resolution 1542, authorized the UN Stabilization Mission in Haiti (MINUSTAH) to support the political transition process, organize Haitian Police (HNP) and demobilize armed groups operating in the country.

To assist this mission, Argentina deployed a joint Argentine Battalion (ARGBAT) in the area of responsibility of Gonaives, Artibonite Department, located at 19° 27'N, 72° 42'W.

The Gonaives particular geographical environment presents a mountainous and arid, low tropical vegetation area that has undergone years of deforestation, consequently leading to desertification, erosion and loss of arable land.

The average annual rainfall is 508 millimeters, recording a period of increased rainfall between the months of June to September. In this period, torrential rains are common that may become tropical storms or hurricanes, with winds gusting up to 120 kilometers per hour.

The nature of this particular climate coupled with high average temperatures causes people living in this environment increased loss of water and salts through excessive sweating, thereby increasing water consumption per capita to above four to five liters per day.

Sufficient uptake of water and the purification of it by different methods present, is a serious problem in the city of Gonaives, mainly due to high salt levels in the ground water as result of the proximity to the sea and the mountainous terrain as well as of contamination by poor health infrastructure of the city.

Under the supervision of the organization responsible for the provision of drinking water, National Service d'Eau Potable - SNEP, the city has three collection wells with a capacity of 200 cubic meters each and 18 meters deep, which date from the beginning of the year 1980. The analysis of the water network of Gonaives showed elevated levels of total alkalinity, calcium carbonate and calcium hardness, besides presenting growth of pathogenic bacteria, perhaps due to poor disinfection processes – there were no residual values of Chlorine.

The ARGBAT is located in the city of Gonaives, in the former premises of a textile plant, the "Cotton Camp", using as a water source a thirty feet deep cartesian well at the property site.

From August 2004 until now ARGBAT produced from "raw water" the substrate of the purification process and water conditioning including the biochemical control of these processes under the responsibility of the Water Section of the Argentine Army Engineers.

The "raw water" from the well presented - as in the rest of the city - high levels of dissolved salts such as calcium carbonate, sulfate and chloride in relation to standards established by the Argentine Food Code for the quality of drinking water.

The purpose of this study was a retrospective analysis of chemical and bacteriological values of treated water in Gonaives in relation to  geography and climate, ensuring the efficiency of water treatment processes, product quality and safety proving the plants efficiency in the of "discard water." 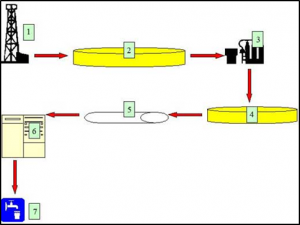 The Water Group of ARGBAT has established and is operating a water purification plant where "raw water" is captured from a Cartesian well (1) and pumped through pipes to the pillow tank with a capacity of 20 000 liters (2). Here,  the water receives a first treatment with hypochlorite disinfectant sodium in a concentration greater than 1 part per million (1,0 ppm), left to stand for several hours before being pumped to the treatment plant GAT® (3) where chlorinated sodium metabisulfite is added which removes excess descaline chlorine, and a solution which eliminates the precipitates of calcium, magnesium and silica. Then the water passes the filter train consisting of cyclonic membrane filters, the first with a porosity of 20 microns and second of 5 microns, finally entering a column of activated carbon which removes organic material leaving chlorine. The filtered water is temporarily stored in a pillow tank with the capacity of 12 000 liters (4) then to be pumped to the reverse osmosis plant Vial Este® (5) which has a filtering capacity of 3 000 liters per hour and a discard residual of 50 %.

Finally, the demineralized water is pH adapted to the final concentration of chlorine with an injector (6) and then stored or distributed to the drinking water network (7). 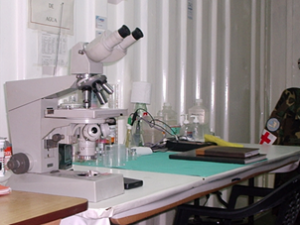 The samples were taken aseptically using standardized sampling methods in polystyrene containers sterilized with ethylene oxide to be processed immediately in the ARGBAT Water Laboratory. Sampling periods are 3 - 4 days, as is recommended according to the rate of consumption and population served.

Sampling locations were: drinking water holding tanks, the base well and the floor drain of the mineralizing process. The following analysis and analytical methods were used:

Bacteriological analyses were performed by the method of filtration of cellulose nitrate membrane 47 mm in diameter and 0.45 micron porosity (Osmonics®) by vacuum filtration on laptop polycarbonate filter (Sartorius® 16510) with hand vacuum pump (Mityvac Silverline® pump). Filtered 100 mL of water sampled by each cultured medium, said membranes were incubated 24 hours at 37° C in the following culture media:

The bacterial growth for total aerobic count was expressed in colony forming units per milliliter (CFU/mL) and in the absence of bacterial growth or other media for cultivation, all referred to 100 ml of sample.

All average chemical parameters tested were within the restrictions established by the Argentine Food Code for the quality of drinking water, except for just  one sample (0.60%) which was chemically unfit for human consumption. the results did not show a significant seasonal variability.

On the bacteriological quality of water, only 2.78 % of the samples showed a faster growth than the limit established by the Argentine Food Code (200 CFU/mL) for total aerobic bacterial count, the same percentage was seen in the growth of coliform bacteria; in this case the selection criterion is given by the absence of growth in the culture medium.

In summary, 99.4 % of the samples analyzed were chemically suitable for human consumption, 97.2 % also bacteriologically.

The present results demonstrate the efficiency of the water purification process in Gonaives, Haiti, since a high percentage of the samples tested in the study (approx. 98 %), were fit for human consumption, as determined by Argentine Food Code.

The variability in the results of analysis of pH, TDS and chlorine residual, very related values of the purification process, coincides with the periods of turnover of the water treatment plant operator, which is determined with the semiannual relay of the ARGBAT contingent. During the first weeks of "adaptation" to the treatment plant more heterogeneous results are observed, which are corrected within the next weeks to be included within the expected parameters.

Chemical and bacteriological characteristics of raw water are maintained without showing large seasonal variations. The only alterations of these values  occurred after Hurricane Jeanne (September 2004), which, like the rest of the city of Gonaives, flooded the ARGBAT-1 facilities, affecting the quality of water from the base well.

Given these potential “threats”, it would be important to add to the battery of tests to be performed on the "raw water" the determination of turbidity. Thie remaining at low levels seems  a guarantee of effective disinfection and also of reducing the toxic substance vehiculization. Furthermore high turbidity values can lead to underestimation of bacterial count and disable the filtration membranes.

There is a correlation between the turbidity and total coliform count, so that the determination of the first would be a qualitative indicator of the risk of microbiological contamination of the well, and also of the presence of Giardia lamblia cysts, which in our purification process are removed in the pre-chlorination stage wherein chlorine concentrations greater than 0.60 parts per million (ppm) eliminate parasite cysts.

Regarding the quality of the effluent treatment plant (water Equipment), while presenting a high degree of chemically dissolved salts being rejected through the reverse osmosis demineralization plant, bacteriologically contaminants remain in the residual water presenting non pathogen aerobic colony growth which are not eliminated since  not receiving any disinfectant treatment. This remaining water is used to irrigate newly forested areas of ARGBAT.