At the end of July 2015, the Federal Office of Bundeswehr Equipment, Information Technology and In-Service Support (BAAINBw) handed over the first serially produced land-based casualty decontamination facility to the Medical Training Regiment (MedTrg Regt) in Feldkirchen. Thus the Bundeswehr Joint Medical Service now has a new capability in the field of CBRN medical defence.

Despite comprehensive global efforts to promote disarmament and arms control, the continued development and proliferation of Chemical, Biological and Radiological/Nuclear munitions (CBRN munitions) and the growing volumes of hazardous industrial CBRN substances still pose a considerable risk of CBRN exposure. The currently most likely operations are conflict prevention and crisis management operations - including the fight against international terrorism - or rescue and evacuation operations. In all of these operations German Armed Forces need to be prepared for the complete spectrum of possible hazard situations originating from the threat of being attacked with and exposed to CBRN warfare agents or hazardous natural or industrial substances of comparable nature. In this context, not only wide-area use of chemical, biological, radiological and nuclear warfare agents are to be reckoned with but also the minor localized use. This includes the threat posed by international terrorism, and the dangers of technical deficiencies and resultant accidents as well as collateral damage in the surroundings of nuclear of chemical plants in potential theatres of operations of the Armed Forces. The sources of danger are manifold and their threat potential is sometimes difficult to identify.

This is the overall setting in which the Bundeswehr Medical Service bears responsibility for maintaining and restoring the health of personnel exposed to CBRN agents. Since health implications in CBRN settings require particular knowledge and skills in the fields of prevention, diagnostics and therapy, a special medical element is required which is specifically tailored to the tasks of CBRN medical defence.

Militarily speaking, the basis for operational medical support in a CBRN environment is the Medical Service's capability to protect personnel, patients, material, facilities and transport assets against CBRN exposure (all-arms CBRN defence). It must be possible to uphold the processes of medical care (e.g. the treatment and transport of patients), even if the employment area is contaminated, until the CBRN threat is over or the patients have been evacuated.

Casualties who have been exposed to CBRN agents can only be treated in medical facilities after the individual CBRN protection measures have been lifted, and contaminated gear and clothing has been removed safely. This is the reason why CBRN exposed casualties have to undergo thorough decontamination in a suitable casualty decontamination facility and receive adequate emergency medical treatment (at the same time) before they can receive follow-on treatment in medical treatment facilities (namely: Role 2 to 4). The casualty decontamination facility therefore must satisfy the operational and tactical requirements of the supported (medical) facility or at least the general requirements of the Medical Service. 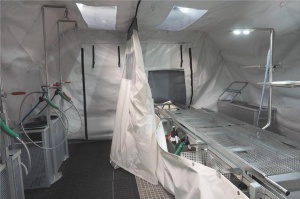 To close the capability gap which was described as early as in 2006, the construction of a demonstrator was commissioned based on the "Final Functional Requirement" and a "First Interim Decision on the Final Functional Requirement" (IAW Customer Product Management [CPM] 2010). The prototype was to be used to prove that the requested functional, operational and tactical performance parameters are met. This proof could, however, not be furnished in 2009, since conceptual shortcomings and material deficiencies were identified in the demonstrator for a land-based casualty decontamination system. It was thus not possible to obtain the necessary technical approval of the system.

The company was entrusted with the task to bring the land-based casualty decontamination facility to series production readiness. It was necessary to make alterations to the power supply system, the air-conditioning and the heating system, to make adaptations to the existing shelter system (tents) and to review both the materiel documentation and the documentation for the overall system. Material that is already commonly in service in the Bundeswehr has been used for peripheral constituents (power supply, air-conditioning, etc.). A module referred to as wet decontamination module consisting of a rail system for moving stretchers (casualty transport system) and a medically certified decontamination foam application system forms the heart of the land-based casualty decontamination facility, and at the same time the two elements to which the most extensive changes were made in comparison with the demonstrator. A subcontractor specialized in the decontamination of material and persons was contracted to conceive and realise concept and components. 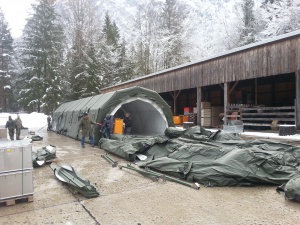 The suitability of the materiel for field use and the operational readiness of the land-based casualty decontamination facility were repeatedly, positively confirmed within the scope of operational evaluations and an extended operational evaluation in the framework of a binational German-Swiss exercise in 2014. Finally, in January 2015, a cold-weather trial was conducted at the Bundeswehr Technical Centre for Protective and Special Technologies (BwTC 52) in Oberjettenberg. The aim was to put the facility to the test in wintery conditions and to examine, among other things, performance and suitability of the water carrying constituents of the wet decontamination module under extreme climatic conditions.

All in all, the system of the land-based casualty decontamination facility allows the Medical Service to decontaminate and administer adequate emergency medical care to up to 20 walking and six stretcher patients within one hour. Initial operational capability of the facility as well as readiness for deployment can be established within two hours. It takes 15 service members to set the facility up and 25 to run it in day and night shift operations under all weather conditions. Operational readiness is ensured by personnel working six-hour shifts. Without establishing external logistics (water, CBRN waste management)  the system can operate self-sufficiently for one hour.

The procurement of serially produced systems is scheduled for the years 2016 to 2018. According to current plans, the Medical Training Regiment in Feldkirchen, the Bundeswehr Medical Service Academy (BwMSA), the three medical regiments and the Rapid Medical Response Forces Regiment (RMRFR) will each be equipped with one of the land-based casualty decontamination facilities, totalling six complete systems for future operation within the Bundeswehr Medical Service.