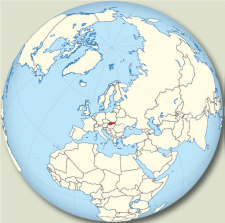 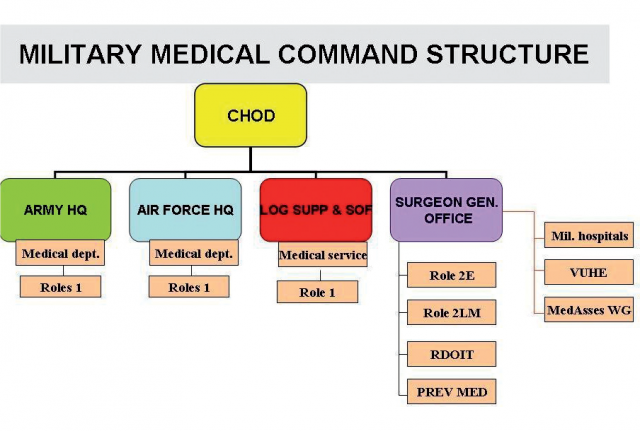 Similar medical structures are incorporated in the ToEs of Logistic Support Units and Special Forces. At the level of individual Services (Land Forces, Air Force and Logistics) there are established Medical Departments (3), which professionally manage and direct individual medical units within military units. Medical departments are professionally managed by the Office of the Surgeon General but are subordinate to the headquarters of individual Services.

The level of brigades and battalions includes the Medical Units (35) and their structure corresponds to Role 1. The level of the primary medical care within the armed forces includes Garrison Outpatient‘s Departments (19) and Health Centres (3), which ensure the primary contact of the members of the armed forces with the medical service. These medical facilities are subordinate to the Central Military Hospital. These facilities provide the first specialized medical care for members of the armed forces of the SR. The medical units in the military units perform tasks mainly within the area of medical training and medical provision of military exercises, and their structure corresponds to Role 1.

Surgical pavilion in Central Military Hospital with heliport located on the roof Central Military Hospital, Ružomberok (CMH Ružomberok): CMH Ružomberok takes an important position in the wide web of military health care facilities. It is the largest military hospital in the territory of the Slovak Republic with its ça 1360 employees. This hospital belongs to the group III.A. type hospitals. The founder is Ministry of Defence of the SR. Military Hospital in Ružomberok was renamed to Central Military Hospital Ružomberok on September 1, 1994. The hospital consists of 18 clinics/wards. Its 400 beds are placed in 5-bed pavilions. The hospital contains one large, beautifully shaped and maintained hospital garden, offering a beautiful environment for patients. All the hospital sections are fully supplied by 257 doctors. Hospital has accreditation to offer University level of education for hospital medical staff in cooperation with Catholic University in Ružomberok and its 22 doctors acquired a PhD and 6 doctors Assoc Prof and Prof Degrees. There is a number of qualified nurses and medical laboratory technicians of different technicality employed in the category MHSP (Middle health service personnel) and other LHSP (Lower health service personnel). Primary health care for military personnel, their relatives and civilians in peacetime on the territory of Slovakia is provided by Garrison Outpatient‘s Departments (18) and Health Centres (3), which are subordinated to the Central Military Hospital. These facilities ensure first specialized medical care.

Institutes
Military aviation staff undergoes regular examinations at the Institute of the Aviation and Preventive Medicine in the Aviation Military Hospital, Košice,  which is the only of its kind in Slovakia. The team lead by three 2nd degree specialized doctors provides examinations required by national law for all civilian air staff as well. Formerly mentioned hospitals together with St. Michal Hospital in Bratislava perform through their Occupation Medicine Depts. checkup of every soldier leaving for and returning from the operation. Every soldier returning from the operation in an epidemiologically dangerous area is immediately isolated for 5 days lasting quarantine in Specialised Institute for Pulmonary Diseases where all necessary examinations are performed. Tasks in the area of the public health service are covered by the Military Institute of Hygiene and Epidemiology, Bratislava (VUHE). Besides the tasks within this area, the VUHE also provides vaccination for the members of the armed forces who are sent abroad to carry out tasks in the foreign missions. Vaccination scheme is individual for every operation. Force health protection includes veterinary support with their task not only in military animal health care but in food and water safety and epidemiology. Vets provide decontamination of material returning from the operations abroad to prevent spreading of non-indigenous diseases. Medical assessments of soldier’s health are performed by a working group of doctors with a specialisation in this field. All these institutions work closely together under the supreme control from the Office of the Surgeon General.

Each individual in the Slovak Armed Forces is trained for Tactical Medical Care and Field Hygiene. Before deployment a Combat
Life Saver Course is obligatory for every medic embedded to a deployed unit. BATLS/BARTS courses for physicians and
nurses in emergency medicine before deployment are provided by Central Military Hospital. To keep the skill of medical, veterinary and laboratory specialists, personnel carries out their everyday duties in military and civilian hospitals/laboratories. Specialized education and training of military medical specialists (physicians and nurses) are provided by accredited civil medical facilities (e.g. Slovak Medical University). We do not provide live tissue training since it is not allowed by the Slovak legislature.

Field Deployments
Role 1
The medical units at the level Role 1 are the main medical unit in the Slovak Armed Forces. It varies in size according to the character of the unit. Usually, it comprises between 15 – 25 medical service members (physicians, nurses and drivers). There are 26 Roles 1 in Slovakia. The medical staff guarantees medical support for the unit. They provide training of every unit member in first aid, in the principles of field hygiene, in the use of personal medical and protective devices and equipment, as well as in transferring the wounded from a battlefield. Naturally, they provide medical support for training the forces both at the garrison and at the military training areas and are responsible for medical material management.

The Office of the Surgeon General has at its disposal a field mobile medical unit, which is able to provide medical care at
the level Role 2E. The personnel of this unit perform its continuous specialized training in the Slovak Republic in a variety of accredited medical facilities, which operate under the competence of the Ministry of Defence or the Ministry of Health of the Slovak Republic. Most of the Role 2E members have experience with deployment in NATO and UN-led international crisis management operations. During their deployment outside the Slovak Republic (states of the former Yugoslavia, Iraq, Afghanistan, East Timor, the Golan Heights, Cyprus and Lebanon), they showed their professional erudition, as well as the interoperability in the international coalitions. In 2013 the unit underwent an international evaluation based on NATO standards and part of the unit was incorporated in EU BG 2016 preparation.

RDOIT and PREVMED
These small easily manoeuvrable and deployable units perform their special tasks in a variety of Force Health Protection and CBRN environment situations.

Equipment used for medical evacuation
At the level Role 1, for the purposes of medical evacuation, we use wheeled equipment and armoured vehicle Tatrapan
produced in the Czech Republic. The number of tracked vehicles and equipment designed for combat activities is limited. Level Role 2 uses mainly wheeled equipment. The Slovak armed forces provide the Air Search and Rescue Service, but its range is limited within the Slovak Republic. Strategic air evacuation is provided in cooperation with NATO countries under international agreements as the Slovak Republic has no aircraft available for such evacuation.

Missions running in 2014 (except observer’s missions):