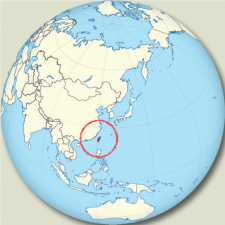 The Military Health Services of Taiwan

Taiwan, officially the Republic of China (ROC), is a country in East Asia with a population of 23.58 million people. It has an area of 36,193 km². Mandarin is the official, national language. The national capital, Taipei, is located in the north of the country. It is home to the majority of government offices, including the Ministry of National Defense.

The healthcare system in Taiwan is based on National Health Insurance (NHI). Every citizen, including military personnel, has an equal right to receive healthcare and treatment. In line with a policy of “localisation of medical services”, the ROC Armed Forces set up military hospitals and medical centres in each theatre of operation (TO) to offer the public and service members medical services, such as outpatient, inpatient and emergency medical treatment, and physical checks. Military hospitals are also medical institutions contracted by the National Health Insurance Administration (NHIA). It is compulsory for every citizen to register with the NHI to support their treatment and care. The NHIA bears responsibility for medical expense review and approval, then pays the medical expenses to contracted medical institutions.

The NHIA is considered to be a successful health system with sufficient services. NHIA facilitates diagnosis, treatment and prescriptions through a national patient health information system on the NHI MediCloud System. Based on the NHI, the majority of citizens, including military personnel, only pay 30% of the insurance fee, and their employers or the government cover the remaining 70%. Generally, citizens only pay £20 per month to access all levels of healthcare.

Figure 1: Structure of the Medical Affairs Bureau (please provide this image to the Almanac as a separate file) 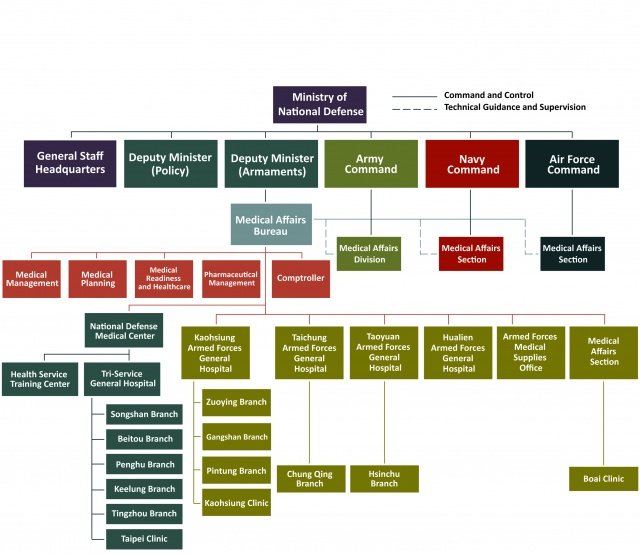 There are one military medical school (National Defense Medical Center), one Health Service Training Centre, and 14 military hospitals. The locations of the military hospitals is shown in Figure 2. There are also 15 veterans’ hospitals which are managed separately by the Veterans’ Affairs council. Through the Military-Veteran Cooperation Platform, the two parties are able to collaborate on medical specialist training and research, and clinical techniques mutual support. According to the Ministry of Health and Welfare, the total number of hospital beds in Taiwan in 2021 was 151,171, including 6,966 beds in military hospitals and 11,313 beds in veterans’ hospitals.

Figure 2: Location of Military Hospitals (please provide this image to the Almanac as a separate file) 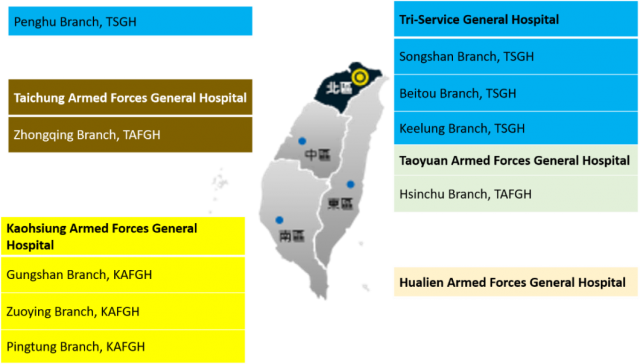 The MHS in Taiwan offers healthcare and services to military personnel and their families, and other categories of civilians. Military personnel are entitled to services free charge as they are exempt from National Health Insurance outpatient, emergency and hospitalisation copayments, as well as the registration fee. Their family members are also exempt from both when accessing the MHS. All other citizens are allowed to access the MHS if they wish, they are required to pay the registration fee and the copayment for healthcare.

The MAB Military Medicine R&D Steering Committee, consisting of experts from diverse disciplines of military medicine, is charged with overseeing policy directions, projects funding and execution, and program effectiveness evaluation & validation for military medicine R&D programs. The R&D initiatives in the MAB are aimed at advancing science and art of modern military medicine based on evidence-based research methodologies and global best practices with the following foci:

Within the research capability of the MAB and military medicine, there is a strong emphasis on building research capability through regional and international collaboration between civil research institutions and military medical institutions. Some of the researchers in the military health system in Taiwan have previously been involved in other research. For instance, researchers at the NDMC have successfully developed a four-serotype-specific NS1 ELISA assay, which is a highly effective and rapid method for discriminating between distinct stereotypes of DENV infections. In particular, the research topics cover Aerospace and Undersea Medicine. 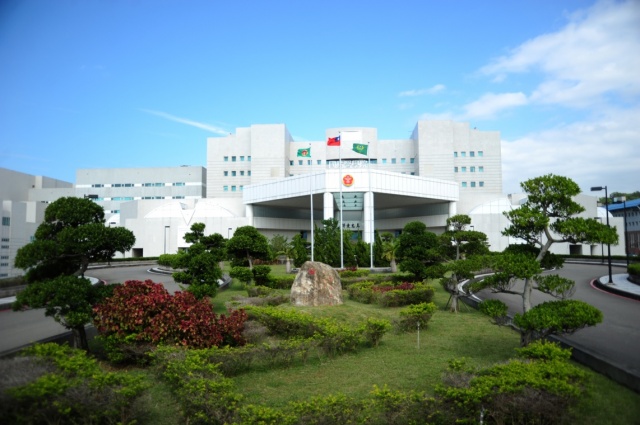 Regular drills in the form of the annual joint exercise for the armed forces are conducted in Taiwan. There is a comprehensive system to treat and transfer casualties from military operations from the point of injury through different levels of care. Under the system, initial emergency treatment and an assessment is given by first responders (military medical personnel). Following this, the wounded military personnel are immediately evacuated to the nearest military or civilian hospital to receive follow-on emergency care. Commanders of military hospitals then provide specialty care assistance. After this, if necessary, wounded military personnel are transferred to TSGH for advanced care (Figure 3).

Figure 3: MAB Concept of medical support (please provide this image to the Almanac as a separate file) 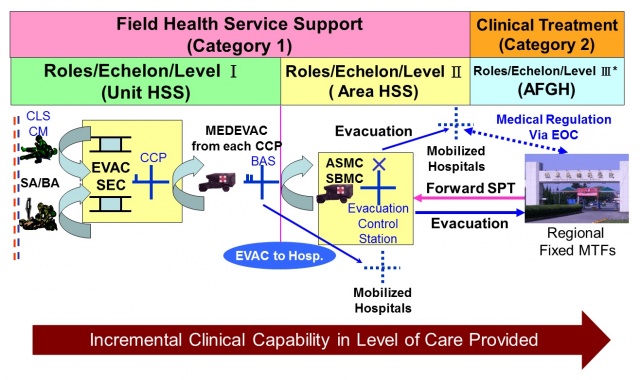 The military health service support system in Taiwan is run on a “2 categories, 3 roles” basis. Category 1, field health service support, is conducted by the respective military services. Category 2, clinical treatment, is provided by military hospitals. In an emergency, civilian hospitals may be assigned to command of the military system (‘mobilised hospitals’). According to the nature of the missions and the characteristics of each military service (Army, Navy, and Air Force), flexible modes of health support are applied to deliver appropriate care for wounded personnel. The missions of the military services’ field medical units (Category 1) mainly focus on preventive medicine, EMS, and prompt casualty evacuation, with no treatment beds being set up. Patients/casualties with more complicated conditions beyond the capability of these clinics will be referred or evacuated promptly to suitable medical treatment facilities in the Taiwan-based secondary military health service. As Taiwan is large and mountainous, military helicopters are often used for medical evacuation missions to ensure military personnel gain access to healthcare in a timely manner.

Commanders of Armed Forces General Hospitals are the highest-ranking medical officers in each area. Based on tactical situations, these medical commanders are accountable for overall command and management responsibility for comprehensive casualty care and disposition (Category 2) via critical care urgency analyses and flexible utilisation of medical resources.

Taiwan MHS actively participates in international military medicine seminars and platforms, such as APMHE, AMSUS, and DiMiMED, to expand multilateral cooperation and solidify the bond with friendly countries around the world. The U.S. is their most important strategic partner. Under the Taiwan Relations Act and the “Six Assurance,” Taiwan continues to upgrade its comprehensive defense capabilities through various Foreign Military Sales programmes and cooperation with the U.S.

To build medical preparedness and capability, the MAB is following the guidance “resolute defense and multi-domain deterrence” to fit into their overall defence concept. They train as they fight in places of war, as well as how they conduct battlefield management, so as to shape their medical operational capabilities to meet the health service support needed. During wartime, the military health system embeds its special medical teams into civilian hospitals to supervise and directly manage hospital resources including manpower and equipment.

In accordance with the Act of Military Service System, military training for conscripts contains a two-phase training course. Firstly, Basic Military Training (BMT) for the first five weeks aims to train the individual in rifle marksmanship as well as combat skills and capabilities, CBRN protection and first aid. Since 2018, enlistees have to complete generic shooting training with designated sections and hours in order to be certified. Secondly, Military Occupational Specialty (MOS) Training in the following 11 weeks provides necessary courses that correspond to conscripts’ designated MOSs which includes those assigned to medical duties.

In accordance with the “All-out Defense Mobilization Readiness Act”, the MAB is in charge of the Military Medical Mobilisation Programme, which includes completing the related measures for investigations and calculations of medical organisations, facilities and personnel, and issuing requisition orders to cope with disaster or wars. For the quick call-up of reservist medical personnel to support effectively during a Mobilisation Implementation Phase, the MAB will arrange training and preparation of reserve forces. Whenever military mobilisation is required, the reservist medical personnel should provide their full support and participate in military drills. To address enhanced training, the MND makes use of annual major drills and exercises to assemble forces from three services in the designated areas to jointly practice defensive operations. This allows participating service members to become familiar with operational settings, battlefield environments, and methods for carrying out operational plans and battlefield management. It also provides an opportunity to improve their competencies and maintain combat preparedness. 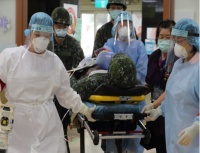 As one of the most important national strategic medical assets, Taiwan’s MHS has long been the indispensable backbone of the national disaster medical system, with a presence at each and every major domestic disaster scenario. Each day, medical teams contributed by military hospitals, augmented by health service support teams contributed by field medical units, stand ready for deployment to execute disaster medical support missions. In compliance with the Disaster Prevention and Protection Act, the ROC Armed Forces’ Regulations on Assistance in Disaster Prevention and Protection, and Emergency Medical Services Act, medical troops will assist in Humanitarian Aid/Disaster Recovery operations in coordination with local government departments.  The operation of ambulances in disaster will be coordinated between civilian and military hospitals. During peacetime, regional medical troops sign memorandums of cooperation with civilian hospitals responsible for patient transfer and treatment. During wartime, these civilian hospitals automatically turn into the mobilised hospitals in each theatre of operations (TO). On top of that, the coordination between civilian and military health system is reinforced through the annual “disaster prevention exercise” and “civil-military joint air defence (Wan An) exercise”. 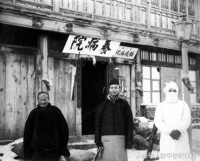 Section7(PIC2) Hospital at that time 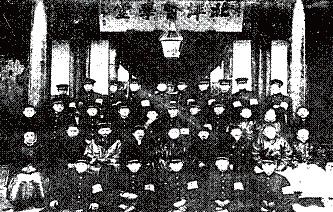 Section7(PIC1) Predecessor of NDMC Since 1902 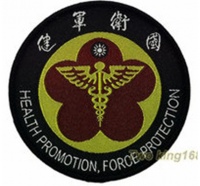 Museums: The Armed Forces Museum was built in 1961 in Taipei.
https://museum.mnd.gov.tw/ArmedForcesMuseumEn