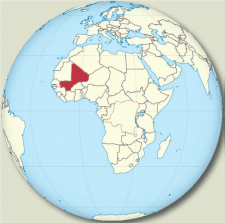 History
The advancement of the Armed Forces Healthcare Department was gradual ever since the independence and adjusted to the medical practices and the evolution of weapons. Its organization became necessary due to the increasingly large number of military personnel, and the risks relating to epidemics and wounds.

The Armed Forces Healthcare Department has witnessed many tribulations and mutations.

• 1993: The Service is no longer governed by the Police, which at the time was considered as the single security force. Its designation becomes Direction Centrale des Service de Santé des Armées (DCSSA) [Central Directorate, Healthcare Department of the Armed Forces]. Up to then it was reporting to the Department.

• 1999: Additional modifications and the Direction des Services de Santé des Armées is thus governed by the Chiefs of Staff Committee and no longer by the Department of Defence.

• The creation of the Direction du Service Social des Armées [Defense Medical Services Directorate], also known as DSSA, both services governed by the Chiefs of Staff Committee, was a source of confusion with regard to the designation.

Mission
Notwithstanding the above, its mission remains unaffected. It was and remains as the healthcare support of the Armed Forces in times of war and in times of peace: to participate in the healthcare and economic development of the country, the humanitarian and peacekeeping missions.

The Direction Centrale des Services de Santé des Armées is responsible for:
• The healthcare and medical support of the Armed Forces including medical-surgical curative undertakings across all specialties;
• Preventive medicine, hygiene, occupational health in the military environment and medical expertise with regard to military personnel;
• Management, organization and logistics related to the conservation and retrieval of personnel;
• Collection, sorting, preparation for removal, removal and treatment of the wounded in all circumstances regardless of nationality;
• Pharmacy in a military environment;
• Veterinary service in a military environment.

Numerous military medical and nursing professionals from the Service are employed in hospitals and healthcare training throughout the country in the framework of its contribution to the advancement of healthcare.

There is no need to make evident that the Direction Centrale des Services de Santé is the backbone of our army. Thus, its role is definitely outstanding.

We should remember that during the various strikes by healthcare workers, the personnel from the Service de Santé des Armées saved thousands of lives. Furthermore, many Military Doctors and Nurses take an active part in national vaccination programs throughout the country and provide healthcare support to Islamic holy site pilgrims.

Organization
The Direction Centrale des Services de Santé des Armées [Central Directorate Healthcare Department of the Armed Forces] is managed by a Director appointed by Decree issued by the Council of Ministers acting on the proposal of the Minister responsible for Defence. He is chosen from among High Ranking Officers or generals from the Services de Santé des Armées.

The Central Director of the Services de Santé des Armées is responsible for the management, scheduling, coordination and control of the service’s operations.

The Director is supported and assisted by a Deputy that replaces him in full right upon his absence, vacations or an impediment.

The Deputy Director is appointed in accordance to the same conditions as the Director.