A 25-year-old man presented at our interdisciplinary emergency department with left-sided thoracic pain after physical exercise. Patient history initially suggested pneumothorax. Based on radiological imaging (CT), a thoracic mass and haemothorax was suspected.

The patient developed haemodynamic shock symptoms two days after admission. A thoracoscopy was performed and revealed a space-occupying tumour and haemothorax with approximately 1.5 l of blood in the thoracic cavity, which required an immediate thoracotomy with complete resection of the tumour and haemostasis. Histological examination resulted in a diagnosis of inflammatory myofibroblastic tumour.

Our case demonstrates an atypical diagnosis for thoracic pain in young patients. Prevalence as well as differential diagnosis and treatment aspects of inflammatory myofibroblastic lung tumours are discussed. 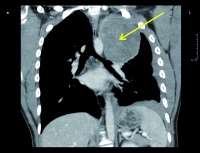 Figure 1: Thorax CT without contrast medium from the day of admission, coronal reconstruction (arrow: apical mass on the left)

Perivascular epitheloid cell tumours (PEComa) are neoplasms that affect the soft tissue [1, 2]. Soft tissue tumours are divided into benign, malignant and intermediate forms [1]. Inflammatory myofibroblastic tumours are a form of PEComa and are classed as intermediate. As such, they have characteristics of both benign and malignant tumours. One of the benign characteristics is that this type of tumour rarely metastasises. Malignant characteristics of PEComa are locally infiltrative / destructive growth, necrosis, a high mitotic index as well as metastatic spread [1, 2, 3].

PEComas show characteristic perivascular growth. Their defining characteristic, however, is the fact that they can be immunohistochemically stained using antibodies such as HMB-45, S 100 and other smooth muscle markers [3, 4, 5]. This was first described for angiomyolipomas in the early 1990s and is characteristic of many tumours [1, 2, 4, 6].

PEComas can develop anywhere in the body [2]. Primary tumours of the lung, however, are rare and seldom described [1, 7, 8].

Course
A 25-year-old man presented at the central interdisciplinary emergency department of Ulm Bundeswehr Hospital overnight. He had been referred from a nearby hospital for left-sided thoracic pain on breathing with unclear radiodiagnostic findings. Patient history showed that he had experienced sudden left-sided chest pain during exercise a few hours before first seeing a doctor. He described the pain as persistent and associated with breathing, with an intensity of 8 (numerical visual analogue scale of 0-10). A thorax CT (trauma CT without contrast medium, as a tumour was not yet suspected) showed a hypervascularised mass in the superior lobe of the left lung that measured 9 x 9 x 11 cm. Based on the results of the CT, a haemothorax was also strongly suspected. The patient was admitted to our department as there was a chance he would require thorax surgery followed by appropriate intensive medical care.

Figure 2: Thorax CT without contrast medium from the day of admission, axial reconstruction (arrow: apical mass on the left) The patient was admitted for inpatient treatment because of his marked symptoms and a suspicion of haemothorax. The aetiology of the thoracic mass of unknown origin also had to be determined. Initially, a blood-filled cyst was suspected, with a neoplasm of unclear differentiation as another possibility. Several methods of obtaining a histological sample were discussed. Thoracoscopy seemed the most suitable and was scheduled to be performed at a later date.

Two days after admission, the patient's haemoglobin level dropped sharply from 12.4 g/dl to 7.9 g/dl, which required an emergency thoracoscopy to stop the bleeding and take a sample for histological examination. Additional preoperative CT imaging was dispensed with as the patient was symptomatic and had dyspnoea and low haemoglobin. The initially suspected haemotothorax was confirmed during the procedure. A total of 1.5 l of blood, partly fresh and partly interspersed with clots, was aspirated. On the left side, an apical tumour emanating from the dorsal thoracic wall was discovered. The tumour adhered to the dorsal thoracic wall and had a visible pedicle from which the bleeding originated. Owing to poor thoracoscopic access to the bleeding as well as the tumour's contact surface with the thoracic wall, a thoracotomy was performed to stop the bleeding and completely excise the tumour.

After surgery, the patient received two transfusions of a total of two units of packed red blood cells and quickly recovered. Haemoglobin levels remained stable. There was no residual pneumthorax or any indication of fistulation, so the chest drains inserted during surgery could be removed on the third and fifth day after surgery. The last follow-up chest X-ray after the last chest drain had been removed showed all parts of the lung to be properly inflated, with no signs of residual pneumothorax. Staples were also visible on the apex of the left lung. The structures of the thoracic organs were otherwise normal for the patient's age.

The patient made a full recovery and was discharged from inpatient care 13 days post surgery. The length of stay in inpatient care was due to the patient's prolonged pain symptoms and emotional distress at receiving a tumour diagnosis at such a young age. He was therefore provided inpatient care until the full results of the histological examination and the tumour board review were available.

During thoracoscopy, the lung appeared macroscopically normal and was connected to the tumour only by smaller adhesions in the area of the upper lobe. The tumour itself was solid, encapsulated, fibrous, and was connected to the thorax wall through apicodorsal adhesions. There was a haemorrhage behind the tumour that could not be accessed during thoracoscopy. The decision was thus made to perform a thoracotomy. During surgery, we could not ascertain whether the tumour originated from the lung or the thorax wall.

Figure 3: Intraoperative site, thoracoscopical (view of the left hemithorax; the encircled structure is the tumour; the arrow points to normal lung tissue)

The apical incision was extended for anterolateral thoracotomy and a wound edge protector was inserted to minimise the potential risk of tumour spread. Because of heavy localised bleeding, the fact that the tumour could not be moved, as well as pleural adhesions, extrapleural resection of the tumour was indicated. To this end, an incision was made in the parietal pleura approximately 1 cm off the site of tumour adhesion, followed by an atypical lung resection performed as a wedge resection of segments 2 and 3 of the superior lobe of the left lung.

Macroscopic examination showed an encapsulated, roundish excised mass sized 10 x 9.5 x 7.5 cm from the apex of the thorax with adipose tissue up to 1.2 cm thick attached to one side. The cut surfaces were solid, yellowish and hardened. Two bright yellow, partly erythroid foci of up to 1.7 cm in diameter were found, one central and one slightly lateral.

Histology revealed a spindle-cell, diffuse, lobular tumour mass with many fascicle-like fibroblasts as well as fibrocytes embedded. The stroma was hyalinised and interspersed with a loose infiltrate of mixed inflammatory cells with sectoral aggregation of lymphocytes, histiocytes as well as numerous eosinophilic granulocytes. Isolated necrotic areas and fibrous septae were observed. There was no evidence of increased mitotic activity.

The Ki-67 nuclear proliferation marker labels 4-8% of cell elements. Some inflammatory components were certainly included in this.

Perivascular epithelioid cell neoplasms of the lung are rare entities. Before 2010, fewer than 50 such cases had been reported in the literature [7, 8]. This case is special because the patient is a 25-year-old male. Such tumours can affect both men and women of any age but case reports more frequently refer to female patients between 35 and 45 years of age [8, 9, 10, 13].

The symptoms in this case were very uncommon in that the tumour was detected as a result of left-sided thoracic pain after physical exercise. In hindsight, this can possibly be explained by the tumour's location on the chest wall. Patient history and physical examination initially suggested pneumothorax, which led to radiological diagnostic procedures (CT). Other case reports normally list haemoptysis, fever and anaemia as initial symptoms [9, 11] or the previously asymptomatic tumour is diagnosed incidentally through unrelated radiological tests [12]. In our case, a severe haemothorax required immediate emergency treatment. A review of the literature showed that symptoms such as those in our case have not previously been described as a complication of primary PEComa of the lung.

The entity in this case was an intermediate tumour [1, 4, 6, 8] that met both benign and malignant criteria. Tumour size (exceeding 5 cm) and necrotic parts are criteria of malignancy. On the other hand, the low mitotic index and non-infiltrative growth suggest benignity [1, 4, 6].

While we cannot definitely recommend a therapy for such tumours on account of their rarity and although follow-up monitoring of survival and disease recurrence as well as locoregional tumour control are required, there are clear indications that such tumours should primarily be treated with surgery and totally removed [7, 9, 11, 12, 13].

A German version of this article you will find here.
Eine Deutsche Version finden Sie hier.