The use of Improvised Explosive Devices (IEDs) in recent conflict often results in complex orthopedic/neurological trauma, which may include limb loss, spinal cord injuries and traumatic brain injury. Survival rate have increased very much, but unfortunately many warriors sustained limb amputations. The primary rehabilitation goal for these individuals is to provide them an expedited recovery and progressive reintroduction in the civilian or active duty populations. In this relatively young population new challenging rehabilitation methods are ideal. The Computer Assisted Rehabilitation Environment (CAREN) is such a systemi.

The CAREN system consists of a motion capture system and a base platform, driven by hydraulic and mechanical actuators. The base where the user stands is designed with force plates and a treadmill, with up to 6 degrees of freedom.  This allows the operator to generate visual and physical perturbations that require the user to make dynamic responses during their gait patterns. The CAREN system may also be equipped with varying degrees of virtual reality immersion ranging from a flat video, dual-channel audio, theater in its “base”model to a 360°, surround sound dome enclosure in its “high end”version. Real-time motion tracking technology enables the CAREN system to follow patient movements. The CAREN system is equipped with a safety harness for the patient. The whole system is controlled by the“D-flow software”, that can be specifically adapted to the users specifications. 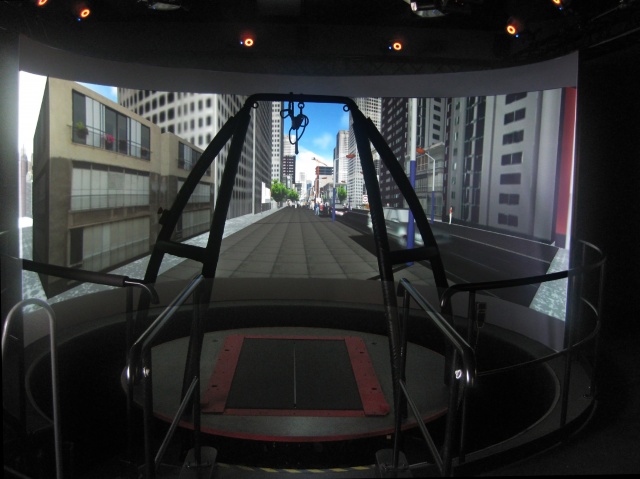 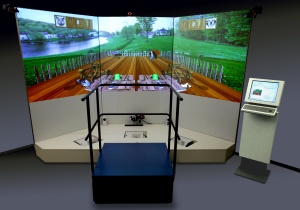 CAREN was developed in the 1990’s and with a limited use in the first years. This is reflected by the literature, that is rather limited and mainly focused at more technical aspects of the tool on the one hand and clinical use for stroke patients on the other hand. Specific reports on use in the military and with amputees are scarce. A selection of the literature will be reviewed here.

Van der Eerden et alii are one of the first to describe CAREN. They describe CAREN as made by customizing hardware and developing software, to enable measurements of motion of a subject in detail, as a response to a perturbation from the computer driven motion platform. After feeding the data in a human body model simulation, joint moments of force and muscle activation can be calculated. From the time patterns of these responses, inferences can be made concerning the motor programs, the subjects launch. Any primary problem in a motor program, resulting in functional failure or inadequacy, can be identified down to the joint and muscle group. Secondary adaptations of patients to a limitation in the periphery (such as lack of muscle force) can be separated from the primary ones. Especially the understanding of compensation strategies in patients may lead to a better therapeutic attitude. They conclude that CAREN offers not only a test environment, with means of almost unlimited exploratory behaviors for patients, but constitutes also a strong tool for motor control research.

Bartoniii states that the functionality of the then usual movable platforms used in human balance studies is limited as they allow rotations around pre-defined axes, which typically run close to the platform's surface and therefore cannot be used to directly investigate control mechanisms of proximal joints.  They determined CAREN platform’s axes of rotation in all three planes. They found the CAREN platform’s consistency to be comparable to validated methods for determining joint axes. They conclude that the CAREN platform is a valuable tool to generate perturbations by rotating the supporting surface around kinematically reconstructed joint axes. The described method could serve as a benchmark for other CAREN systems. The accurate translation of the CAREN platform’s axes of rotation into arbitrary locations overcomes the limitation of other moving platforms. The benefit of rotating the supporting platform around a joint’s axis rather than around an axis outside the body is that the joint is purely rotated without being translated and this removes the confounding effects of translation on balance. The ability to apply isolated rotational perturbations on targeted joints while standing, opens up the possibility to focus on the role of individual joints in balance mechanisms.

Maksoudiv also studied virtual reality technology and states that it offers the opportunity to expose patients to complex physical environments, without physical danger and thus provides a wide range of opportunities for locomotor training, or the study of human postural and walking behavior. A clinical study has shown that persons after stroke are able to adapt and benefit from this system, wherein they walk into virtual environments on a self-paced treadmill, mounted on a platform with 6 degrees of freedom. This platform is programmed to mimic changes in the terrain encountered in the virtual environments. While engaging in these virtual environments, excessive trunk movements and speed alterations have been observed, especially during the pitch perturbations accompanying uphill or downhill terrain changes.  The aim of this study was to determine an optimal solution to simulate walking in real life when engaging in virtual environments.

Kizony et alvi studied dual tasking, especially in people with neurological deficits. The authors set up a study to test the feasibility of using a virtual functional environment for the examination of dual tasking and to determine the effects of dual tasking on gait parameters in people with stroke and age-matched controls who were healthy. Participants walked on a self-paced treadmill while viewing a virtual grocery aisle, projected onto a screen placed in front of them. They were asked to walk through the aisle (single task) or to walk and select ("shop for") items according to instructions delivered before or during walking (dual tasking). Overall, the stroke group walked slower than the control group in both conditions, whereas both groups walked faster over ground than on the treadmill. The stroke group also showed larger variability in gait speed and shorter stride length than the control group. There was a general tendency to increase gait speed and stride length during dual-task conditions; however, a significant effect of dual tasking was found only in one dual-task condition for gait speed and stride duration variability. All participants were able to complete the task with minimal mistakes. They conclude that it is feasible to use a functional virtual environment for investigation of dual tasking. Different gait strategies, including an increase or decrease in gait speed, can be used to cope with the increase in cognitive demands required for dual tasking. 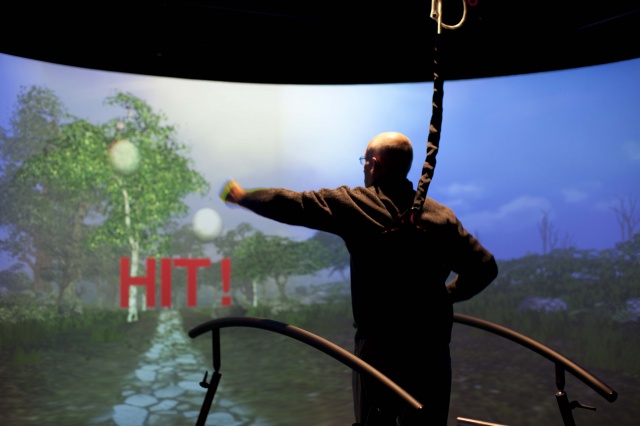 Isaacson et alvii describe how CAREN may improve physical and cognitive rehabilitation for wounded warfighters. They use CAREN the system to assist service members, who have sustained improvised explosive device injuries during Operation Enduring Freedom, Operation Iraqi Freedom, and Operation New Dawn. They describe that the complex nature of warfighter injuries, present unique rehabilitation challenges that demand new tools for quick return to active duty or the civilian community. They describe the CAREN system as unique, in that it allows a wounded warrior to be immersed in a realistic clinical environment, while therapist and physicians collect kinematic and kinetic data in order to plan future rehabilitation regimens. In everyday life, warfighters with lower extremity trauma may experience uneven terrain, cracks in pavements, slippery conditions, etc. –all potential scenarios that would may increase fall risk or injury. However, when using the CAREN system, specific physical perturbations may simulate these environmental conditions in a more safe and controlled setting. New rehabilitation methods and gait/prosthetic limb training may be developed for these individuals to mitigate falling risks outside of the clinic. They conclude that the CAREN system is a dynamic rehabilitation aid may be a translational tool for collecting biomechanical and physiological data during prosthetic training. As such, rehabilitation regimens may be patient specific.

The Netherlands Armed Forces have a Military Rehabilitation Center, where all military rehabilitation patients are being treated. Also a considerable number of civilian patients are seen, around 40 % of the population. In the Figure 1 you see the distribution of the patient categories. Of course the great majority of stroke patients (90 %) were civilians, whereas 80 % of the amputation patients were military.

Fig.1:Distribution of the patient categories

In a studyviii in the Dutch Central Military Rehabilitation Center 50 subjects underwent training on the CAREN. They were asked to give their opinion on eight questions, using a Visual Analog Score (VAS) by placing a mark on a continuous 10 cm long line. The general domains addressed were the following: Relationship with the therapist (Relation), Goal oriented therapy (Goals), the approach of the therapists (Approach), the way the patient thinks about the general therapeutic contact (Whole). Specifically for CAREN the following was investigated: The attributed importance of training on the CAREN-system to the rehabilitation process (Share), is The rehabilitation process accelerated by the CAREN-system (Acceleration), the amount the therapy is considered challenging (Challenging) and whether transfer of training to the real world is present (Transfer). All domains scored above 8, which is a satisfactory level. Interestingly, patients point out that they think that training on the CAREN-system accelerates the rehabilitation process, has a important role in their recovery, is challenging and transfer of training to the real world is noticeable.

In a recent paper by Vermetten et alix a report is given en developments of the use of CAREN for mental health problems in the military. They describe that although the symptoms of Post-Traumatic Stress Disorder (PTSD) in the general and military population seem very similar, combat-related PTSD is typically thought to be more severe due to the repeated and prolonged exposure of traumatic events. Therapeutic adherence is a problem in military populations compromising treatment efficacy. Therefore, a new, potential supplementary treatment is specially designed for patients with combat related-PTSD. This intervention is called Military Motion Memory Desensitization and Reprocessing (3MDR). The treatment incorporates key elements of successful treatments as Virtual Reality Exposure and Eye Movement Desensitization Reprocessing and adds motion to the condition. They aimed at designing a treatment procedure that preserved dual task processing principle, but they also introduced new engagement, by performing the desensitization during motion by to walking on a treadmill. Moreover, they aimed at exposure to real high-affect pictures of deployment setting. These pictures are chose by the patient and must have a link to the traumatizing event or environment. Subjects walk a repetitive cycle, while walking and viewing the high affect pictures of deployment scenes. Dual task processing was maintained by an oscillating ball. Aspects of presence are adhered to, to maximize possible positive outcome. The authors describe the therapy in two patients and they conclude that the results of the two cases suggest that the 3MDR treatment is a successful, more additional treatment, that goes further into the patients affect, where other treatment may stagnate. The presence was highly appreciated. They plead for further research with more patients to be performed, to obtain more reliable results.

The CAREN system is mainly designed for a Research and Development environment. Is has certain infrastructural requirements and a higher level of technical development. Therefore MOTEK Medical Company, Amsterdam, The Netherlands, developed other systems for clinical usex

TheGRAIL, Gait Real-Time Analysis Interactive Laboratory, is a tool for use in regular rehabilitation medicine as a gait lab. Instead of the 6 DOF platform it has a dual belt treadmill. GRAIL needs less 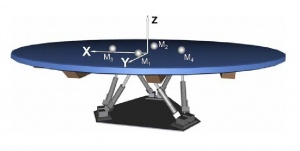 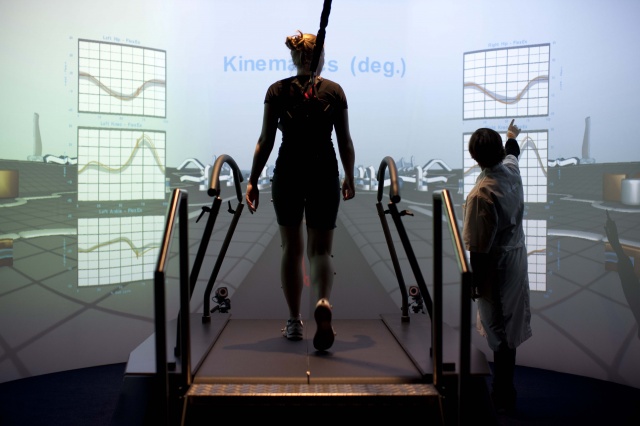 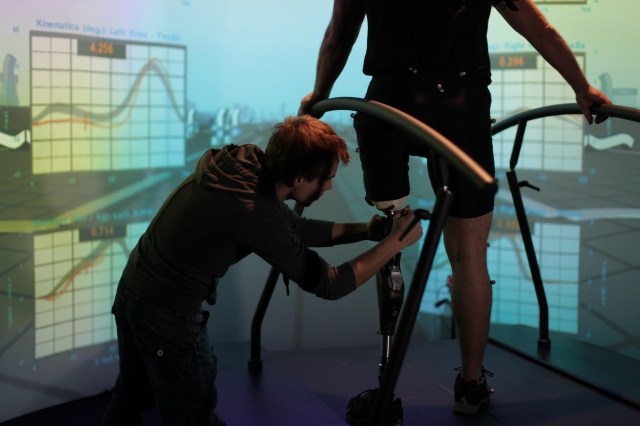 CAREN is a useful tool for rehabilitation in the military. Although literature is limited and research in progress the first results are promising, both in terms of clinical results and in patient acceptance. In The Netherlands Armed Forces and some other nations it is a valuable tool in the rehabilitation programs for wounded warriors. New developments in the use of CAREN for the treatment of combat related PTSD are rather positive. Technical developments will make the more widespread use of Virtual Environments in rehabilitation medicine feasible.