The German Führungsakademie der Bundeswehr offers a course that addresses military medical support in the humanitarian arena in the form of a NATO-accredited training measure for civilian healthcare providers and military medical personnel. The course familiarizes the participants with the principles of medical support at the civil-military interface, offers a platform for discussion and allows for a practical application of skills and knowledge during a tabletop exercise. It provides an excellent opportunity to gain an enhanced understanding of the interface between the military and civilian sphere and serves as a forum for mutual exchange.

As military forces face increasingly complex scenarios requiring crisis management on the sector of medical care that involves both civilian and military instruments, it is necessary to define their interaction at the civil-military interface by means of sound policy and doctrine. In addition to that, challenges also need to be addressed by appropriate education and training efforts. Whereas the doctrinal foundation was laid by Allied Joint Medical Publication 6 (AJMedP-6), the MMSHA course covers important aspects of humanitarian assistance in complex emergencies. Since 2007, the MMSHA course at the Führungsakademie der Bundeswehr in Hamburg has evolved from a binationally planned and conducted German/Dutch  program to a NATO-accredited module. The current format of the course was developed in close cooperation with NATO’s Military Medical Centre of Excellence and in November 2014, the course was granted NATO “SELECTED” accreditation. The course is open to medical and non-medical military and civilian participants. This year, it was conducted in its new format for the second time. From 18th to 25th May 2015, 20 field-grade officers coming from Germany, Hungary, the Netherlands, Norway, the United Kingdom and the United States and representatives from the civilian field completed the module at the Führungsakademie der Bundeswehr in Hamburg. 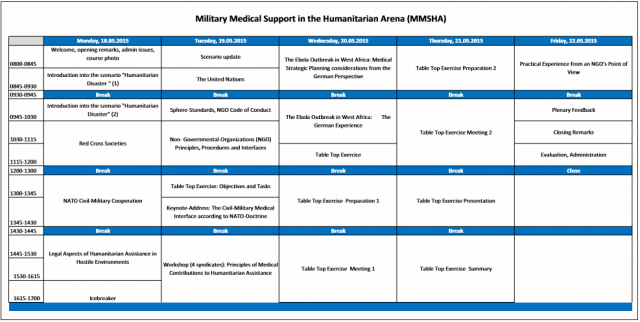 Principles at the Civil-Military Medical Interface

The course is basically divided in two parts: During the introductory phase, several presentations are held, aiming at a deeper understanding of the civil-military environment. The purpose is to familiarize the participants with both the perspective of civilian actors and the perspective of military medical leadership in terms of principles and challenges. In this context, the program focuses on the role of international, governmental and non-governmental actors and organizations while discussing potential military contributions. Therefore, the interaction among these actors is discussed in terms of opportunities for coordination, collaboration and cooperation but also against the background of constraints and restraints. Introducing the perspectives of UN OCHA and the ICRC as decisive actors, the principles of humanity, impartiality, neutrality, and independence are emphasized and compared to military objectives that may differ from these principles. Moreover, important aspects such as accountability on both sides of the interface, mutual respect, and cultural awareness are covered in the introductory briefings.

Linking the theoretical part of the course to the tabletop exercise, this year’s course provided insight into the international response to the Ebola outbreak in West Africa in 2014 from a German perspective. Lessons learned addressed epidemiological findings, the coordination of this mission at the strategic level and the conduct of the mission, which revealed the strengths and weaknesses of military medical contributions. Whilst military contributions usually come with capable means of command, control and communication and also with sufficient logistic support and capable medical intelligence and health surveillance assets, all actors involved have to be fully aware of the fact that a potential conflict between military objectives and humanitarian principles might hamper the overall mission.

Furthermore, the “Sphere Project” providing a set of universal minimum humanitarian standards, the principle of “do no harm,” and the “code of conduct” adopted by the Red Cross/ Red Crescent movement and major NGOs were explained in detail. The keynote lecture provided by the Director of the Centre of Excellence for military medicine (MilMedCOE) concluded the introductory part of the course and set the scene for the following tabletop exercise. Throughout the course, particular emphasis was placed on appropriate standards of healthcare supported by military medical forces in case of a humanitarian crisis. These standards need to be acceptable, credible and sustainable in terms of being embedded into a system that allows for appropriate follow-up treatment in the long run. 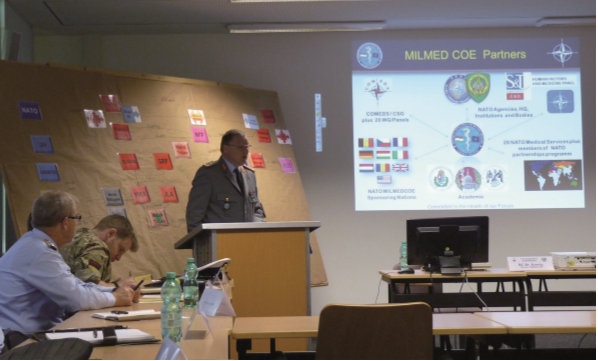 The second part of the course saw a tabletop exercise with a NATO exercise scenario that was only recently introduced to the Führungsakademie and that facilitates operational level planning in general staff officer courses. It is about an escalating crisis taking place in a fictional African region with an ongoing UN mission in a failing state, with commitment of international and non-governmental organizations and with the deployment of a robust NATO force. Adapting the scenario to the purpose of the MMSHA module, the course directors provided information for this exercise that focused on a response to a deteriorating humanitarian situation in a complex strategic environment. During the exercise, the course participants formed groups and assumed roles of civilian and military actors. They were tasked to develop mutually accepted civil-military solutions to challenges arising during humanitarian assistance in a crisis. A UN OCHA representative chaired several civil-military meetings, during which the participants were required to clearly define their roles and responsibilities, identify potential contributions from different perspectives, and develop a common approach to the solution of crisis-related medical problems. More specifically, the participants were asked to consider the following aspects:

Feedback on the groups’ performances was provided by facilitators from civilian organizations and from military medical experts. 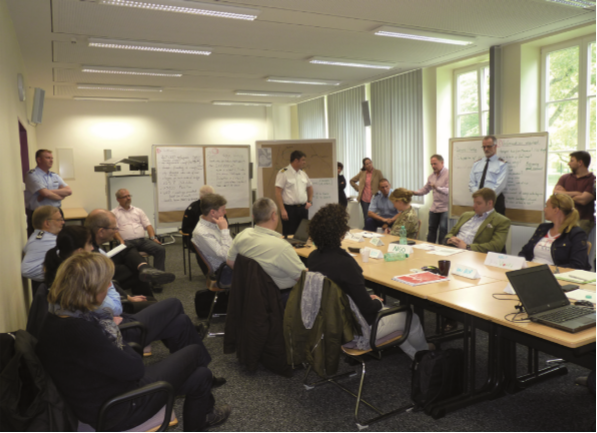 Based on the feedback of course participants, it can be stated that the course has strongly enhanced the knowledge and skills of military medical planners and civilian healthcare providers. The participants seized the opportunity to learn about civilian requirements and the military perspective. Applying this knowledge during the tabletop exercise certainly helped them to deepen their understanding of these aspects. The most valuable achievement of this course, however, was that it facilitated transparency and provided a platform for exchange at the interface of the civilian and military medical spheres. The purpose of this course is not simply to familiarize the participants with this interface but to offer them a forum that contributes to mutual understanding in a modern educational environment. There is no doubt that this course hugely benefits from the contributions by a selection of civilian organizations, which is a prerequisite for achieving the aforementioned learning objectives. Moreover, the experience of a multinational environment is of utmost importance, since approaches to problem-solving do not only differ among civilian and military actors but also among military medical services of different nations.