Advisory: An Afghan Solution for an Afghan Issue

Since ISAF was replaced by Resolute Support, the focus of the mission shifted as well. The main line of effort of Resolute Support is Train, Advice and Assist. Therefore a large team of advisors conduct almost daily visits to their counterparts in the different ANDSF-pillars. In TAAC-North the 209th ANA Corps, 3rd Afghan Civil Order Police (ANCOP), 806th Zone Afghan Border Police (ABP), Police Headquarters of Balkh of the Afghan Uniformed Police (AUP) are being advised by the Medical Hybrid Advisor of CJMed TAAC-N. The advisor has a facilitating and mediating role in this process. The advisory focusses on the HQ-level of the different police-pillars and on the Corps-level of the 209th ANA Corps, all situated in Mazar-e-Sharif.
The approach of advising within the TAA isn’t to offer a preconceived solution to an issue to the different ANDSF-pillars. If the pillars find an Afghan solution to an Afghan problem on an Afghan way, the effect of the solution will be more sustainable.
The advisory to the ANSDF started in 2014 and became the main effort of Resolute Support as from 01 January 2015. The chosen method is very successful with the Afghan counterparts. The advising gives them a feeling of responsibility and they feel their abilities are being recognized because they are managing their own issues.

The approach of advising within the TAA is not to offer a preconceived solution to an issue to the different ANDSF-pillars. If the pillars find an Afghan solution to an Afghan problem on an Afghan way, the effect of the solution will be more sustainable. The advisory to the ANSDF started in 2014 and became the main effort of Resolute Support as from 01 January 2015. The chosen method is very successful with the Afghan counterparts. The advising gives them a feeling of responsibility and they feel their abilities are being recognized because they are managing their own issues. 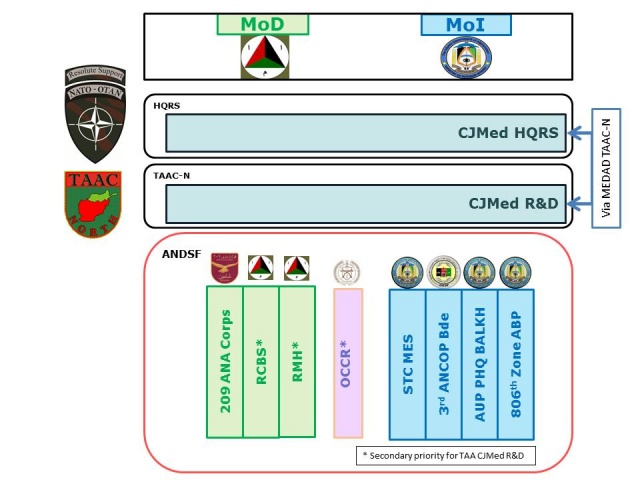 The advisory doesn’t go always as fluent as desired, due to many challenges. These challenges can be brought together in five main domains: security, culture, logistic, training and organization.

The current security situation in North of Afghanistan has a great influence on the motivation of the Afghans. The heads of the medical branches of the ANDSF-pillars are determined to improve. Their many personal losses, for example one doctor lost his sister in an insurgency attack during the years of war, this gives them a goal to keep them focused on the future of Afghanistan.

Perhaps the biggest challenge is to overcome the differences present in the Afghan culture, which sometimes works retarding on the progress the Afghans want to make. Corruption remains a widespread phenomenon in the system. Unfortunately, in TAAC-None medical officer was caught selling his unit’s medical supply for his own profit. There are already some countermeasures against these kind of custom to make the logistic supply as transparent as possible. A second cultural difference is the limited availability of the medical officers. Making an appointment is often no guarantee that the meeting will take place, nevertheless it was clearly coordinated on forehand. This may not affect the attitude of the advisor during the following visits. Unlike some preconceptions, the Afghan medical officers are open-minded to discuss the problems they encounter. There is a vast willingness to enhance the health care of their units.

On the logistic level there are also some short comes, which sometimes can’t be compensated at the local level. Some issues need to be addressed to the administration in Kabul. There are already control systems in place to confine the window of opportunity for corruption. The MOI-14 and MOI-9 are official forms whom are used for requesting materials and receiving them. Without these MOI’s it isn’t possible to request or receive supplies. The future digitization of this system will only reinforce the anti-corruption policy of the GIRoA and will make the logistics nearly waterproof.

There is a dire need for ambulances, proper medical equipment and appropriate (cooled) warehouses, this urge can hardly be resolved on the local level. For these issues they need support from their headquarters and the Ministries in Kabul, but due to the slow administration and gruff procurement, this will become a long term project for the urgent need.

A possible solution for the CL VIII supply can be the use of a Regional Logistic Centre (RLC), which is situated in the compound of the PHQ Balkh. Currently all the police units collect their resupply at Kabul themselves. This costs time, as well as money and mostly the doctor is out of office for almost a week and can’t conduct his normal tasks. The development of the RLC in Mazar-e-Sharif has already developed, but the CL VIII remains a problem. There is no qualified personnel who can handle the medication, the storage and transportation of the medication isn’t adapted to the temperature limitations of some medication. Therefore the medical officers from the police pillars aren’t willing to use the RLC. There is a need for a top-down solution and therefore TAAC-N has asked the assistance of HQRS to advice at MoI-level.

A next challenge is the lack of medical training. On the one hand, the availability of First Aid-courses poses a threat. The First Aid-course isn’t always included in the basic training of the policemen. On the other hand the insufficient number of qualified medical personnel (physicians, nurses, combat medics, …) limit the capabilities of the units. The available medical personnel aren’t always used in a proper way; sometimes medical personnel are used for guarding duty and similar assignments. In the other sense, non-trained personnel are used to conduct medical tasks. For the advisor this remains a permanent struggle, but in the past we were able to convince some leadership to change their policy on this topic. As for the medical training, the staff training officers have begun with a cross pillar cooperation to offer places to the other pillars, if they have some rest capacity in medical training. During the TAA activities the advisors were able to convince the G7 officers of the units to be more involved for the medical training. This was shown during the G7-Shura, organized on 6th Oct 2015. For the first time, the medical officer of 806th Zone ABP was given the opportunity to address the meeting. He stated: „Sweat during training can prevent blood on the battlefield; therefore you need to invest even more in sweat during medical training so we can compensate other’s lack of sweat during theirs training.”

The lay-out of the police pillars headquarters is currently not adapted to an operational planning process, such as is being conducted in European countries. With the exemption of the 209th ANA Corps, the head of the medical branch isn’t considered a staff officer. He carries only a clinical responsibility in the opinion of his commanders. Under present circumstances, there is no opportunity to change the staff planning process of the police pillars, since it is, in the eyes of the commanders, more important to have success pending on whatever cost. Though, the medical officers are willing to pick up their responsibility and to contribute to the planning of operations. Hopefully, this will be possible in the near future, on the condition the security situation stabilizes.

To tackle all the Afghan challenges an efficient strategy is needed. From NATO’s point of view, the key to success in the current Afghan situation is cross pillar coordination. Until present day, there has been few neither good communications nor coordination between the different police and army pillars. During the TAA activities, it was made clear by the police pillars they are willing to do more than just the cross pillar coordination. Therefore the aim of the advisory in the medical branch shifted to the cross pillar cooperation. In this way, the ANA and police pillars will work more closely together on a more sustainable manner.

On the 5th of September 2015, a medical Shura, or assembly, was held, led by TAAC-N. This first meeting, since a long time, was intended for police-pillars only. The output of this meeting was a list of 15 common issues. This list is the starting point of the cooperation of the police units in Mazar-e-Sharif. On the 15th of October 2015, a second medical Shura, Afghan led, discussed this list and they will try to resolve these issues. The ultimate goal of these Shura’s is to establish a permanent forum where common police issues can be discussed, without involving TAAC-N. The cooperation has already a positive outcome, since the police-pillars can access the Regional Military Hospital, led by ANA, for their sick and wounded policemen. One of the next efforts of the Shura will be a solution for the logistic problems for the resupply of medication.

During the Second Medical Shura the medical officer of the Sergeant Training Centre outed the idea to found a committee of Medical Police Officers in Mazar-e-Sharif. This committee will have a legal base and the permission to speak to authorities in the name of the four police pillars in Mazar-e-Sharif. This idea had been suggested during previous meeting by the advisor to the medical officer of STC. The advice isn’t obligatory, so them willing to establish a committee is their own initiative and will become their own project.

It is obvious that the entire process follows an Afghan time schedule. What began with a kinetic intervention in 2001 has now changed into a relationship based on understanding and mutual respect. The advisory task will take more time as first planned. If Resolute Support and our Afghan counterparts can continue in the same way, there will be structural and permanent improvements to a hampered system.

If the ANDSF invests in training, materials, personnel and procedures, they will seize their own fruits from it during their future operations. Their costs will be reduced, as well as their number of wounded and killed policemen. The advisor needs to be present in the near future to guide the Afghan process where needed.

In the meantime the different framework nations of Resolute Support, Germany and the United States of America, decided to prologue their stay with a year. This will only result in further advising towards a sustainable, Afghan cooperation.