Indonesia Medical Assistance to the Democratic Republic of Timor Leste

A Friendship for the Present and Future

On July 9, 2015, the Democratic Republic of Timor Leste (Ministry of Defense) wrote a letter of invitation to the Medical Team of the Central Army Hospital Gatot Soebroto, Jakarta asking for medical assistance in Timor Leste. The Indonesian Minister of Defense, General (Ret) Ryamizard Ryacudu, responded by ordering a medical task force consisting of the Indonesian Army, Navy, Air Force, the Surgeon General of TNI HQ and Mindef. The mission was to be executed by KRI dr Soeharso 990, a level III hospital warship from Indonesia’s Eastern Fleet.

The Medical Service of the national defense system carries out missions to support Operation Military War (OMW) and Operation Other Than War (OOTW) according to article 7 of the Indonesia Defense Force Law No 23, 2004. The Medical Service of the national defense system regards human resources as a core strength. Quotes from the fighting man show the importance is theof human resources in the management of all other resources. To enhance the ability of the medical personnel,  formal as well as informal , training and field experiences either national or international are required. The experiences can be achieved through civilian missions like treatment of mass casualtiesor social work. The TNI or Indonesia Defense Force has many OOTW activities within the country and outside the country, which are needed because of war, conflict or natural disasters. Medical assistance to RDTL is one of many kinds of programs that have been initiated. It is important for Indonesia to fulfill this mission to increase bilateral cooperation between RI and RDTL, for capacity building measure opening new opportunities in the future.

At July 9, 2015, the RDTL Ministry of Defense wrote a letter of invitation to Medical Team of Central Army Hospital Gatot Soebroto, Jakarta to do a medical service in Timor Leste. This letter than responded by Indonesian Minister of Defense, General (Ret) Ryamizard Ryacudu to build a medical task force consisted of the Indonesian Army, Navy, Air Force, Surgeon General of TNI HQ and Mindef. The mission will be executed with KRI dr Soeharso 990, a level III hospital warship from Indonesia’s Eastern Fleet.

The Task Force then made a term of references as a guide of the mission, Letter of Order of the task force team from the three forces, done some internal meeting and coordination with the RDTL representative in Jakarta. The advance team was send to Dili to see what the RDTL really need to be helped, the spectrum of the diseases and also to assessed the medical resources and health infrastructure that can be used. Meanwhile the hospital warship was prepared in its Main Naval Base in Surabaya, East of Java. The medical service will be done on the ground and in the ship for selected cases. Two medical battalions from Army and Marines will also on board and will do the ground medical services. The main medical services were general and specialist medical services including dental services. The patients were from RDTL veteran, police and military active duty and the peoples of Timor Leste. Approximately 2000 patients were expected from January 30th to February 1st 2016 in Dili.

To execute the mission the task force will used the Indonesian Warship (KRI) dr. Soeharso.It was a Landing Platform Dock built in 2003 named KRI Tanjung Dalpele and on August 1st 2007 become a Hospital Ship named after a national hero, as KRI Dr Soeharso, with pennant number 990. Commanding by Commander Ashari Alamsyah the warship can carrying 75 crews and 65 medical personnel. In emergency it can carry 400 troops and 3000 passengers. 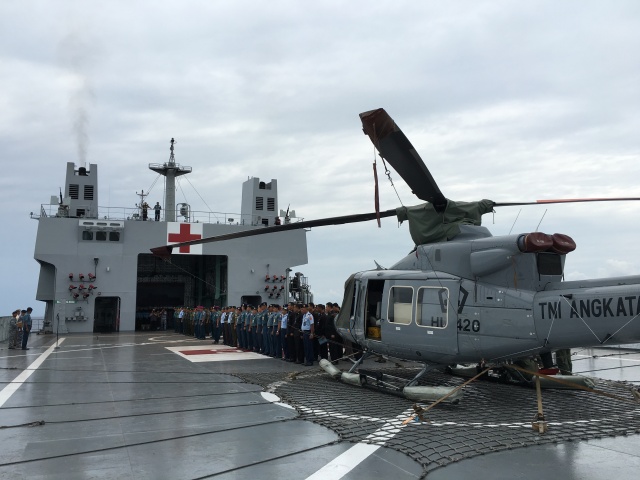 With a total length of 400 ft, an overall beam of 72 ft, and a hull draught of 22 ft, powered by diesel engine it can displace around 16,000 tons at full displacement and reach a top speed of 15 knots with a standard range of 8,600 nautical miles. The hospital ship equipped with 1 emergency room, 3 operating theater, 6 polyclinics, 14 support room and 2 nursing room with 20 beds on each room. As a head of the hospital was Commander A. Pudji Widodo MD from Eastern Fleet Medical Service. This trip was the first overseas mission carried out by the vessel in cooperation with the Ministry of Defense.For this mission KRI SHS-990 carry one helicopter Bell 412 EP, built by PTDI Bandung West Java in 2012, belongs to 400 Squadron Air Wing 1, Naval Aviation Center for air evacuation. It also carried 2 Landing Craft Unit (LCU) for personnel and logistic transportation.

The task force strength of 426 personnel including 156 crews of the ship and 51 specialist doctors and dentists gathered in Surabaya on January 24th 2016. This team was lead by Director General of Defense Strengthen, Rear Admiral Agus Purwoto and his deputies Mindef Director of Health BG Hardjanto MD, Mrs Nora Ryamizard Ryacudu, a dentist and Col Asrofi, MD a plastic surgeon both from Gatot Soebroto Central Army Hospital Jakarta. As a steering officer was First Admiral I Dewa Gede Nalendra MD, a thoracic surgeon Chief of Ramelan Navy Hospital Surabaya and Navy Captain Wiweka MD as an operation officer.

After a four days unforgettable journeys from Surabaya the ship arrived in the port of Dili on January 29th 2016. The ship was warm greeted by Indonesian ambassador in Dili, Primanto Hendrasmoro, and from RDTL Defense Minister, Cirilo Cristovao, Foreign Minister and Cooperation, Hernani Coelho and Health Minister Maria do Ceu Pina and the citizens of Dili. A welcome dance of Checuvo from Los Palos distric was performed to greet the task force team. The RDTL Defense Minister Mr Cirilo Cristovao stated that this mission is the realization of the good relations between the two governments. The medical service then officially opened by Commander Forza Defeza, Major General Lere Anan Timor. The high ranking officials then toured the ships facilities to be used in the mission. Meanwhile hundreds of veterans, police and military personnel of RDTL waited to be examined, because the first day was dedicated to them and their families.

The medical service was conducted both on the ground at the port of Dili and in the hospital ships. For general, specialist polyclinics and dental clinic without major surgery was done on the ground. The medical battalions set up tents and prepared the building in the harbour to be used as clinics. 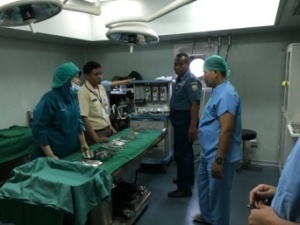 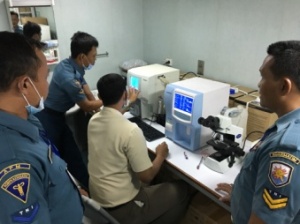 The ground policlinics were General Clinic, Dental and Oral Surgery, ENT, General Surgery, Ophthalmology, Internal, Neurology, Pediatric, Cardiology and Dermatology. In the ships there were neurology clinic which performs an early detection for 60 stroke patients, operating theater for cataract surgery, major surgery and other selected surgeries. Some of the doctors from RDTL also take part in the clinics and operation room. 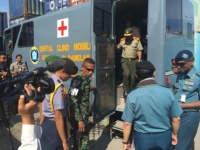 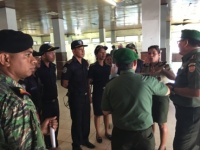 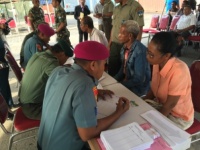 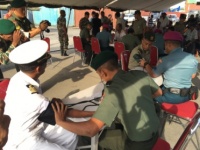 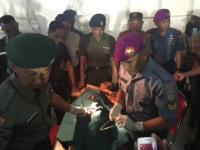 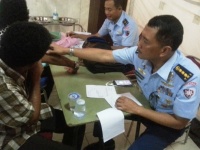 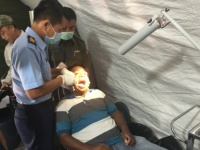 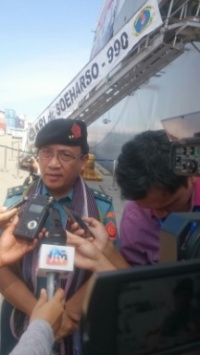 At the first day 765 veterans and active duty personnel were treated including some of the VIP being medically checked up, and 13 operations. At the second days there were 1955 patients with 113 operations perform. At the third day as a last day there were 706 patient and 70 operations. The total was 3426 patients and 196 operations! This numbers exceed the expectation which were 2000 patients. Surprisingly most of the minor operation was 123 circumcision patients. The citizens of Timor Leste who mostly can speak Bahasa Indonesia said that they hopes the service will be last for 1 or 2 weeks so more of their families can have the benefit from the mission.

Hopes for the future

Mr Xanana Gusmao, who now serves as the country’s Minister of Planning and Strategic Investment, visited the ship twice and expressed hope that such activities could be expanded in the future. He said terima kasih banyak…….(thank you very much), obrigado barak, in Tetun language, for the medical assistance being done by Indonesia when he invited all officers for dinner at Timor Plaza.

Mr Xanana Gusmao said that these mission would enhanced the relationship between the governments of Indonesia and Timor-Leste. In the future, he hopes that this activity would be organized in some other areas of Timor-Leste.

At the end of the mission the RDTL Minister of Defense (Ministerio da Defesa) gave a medal of honor for all member of the Indonesian Medical Task Force as an appreciation of their outstanding services for the peoples of Timor Leste. The medal was received by BG Hardjanto representing all military member and Mrs Nora Ryamizard Ryacudu representing all civilians service at the ceremonial of the RDTL Armed Forces.The Indonesian Minister of Defense, Gen (Ret) Ryamizard Ryacudu was present to witness the medal parade and the ceremony of the RDTL anniversary.

After three days of serving the KRI SHS 990 and its crew was departed from Dili harbour to his next mission………leaving behind the satisfied patients…friends…brothers and sisters… See you next time Timor Leste………Obrigado barak…….

Chief of Transportation & Dermatologist of the RI-RDTL Task Force

Chief of Medical of the Air Force Command I, Jakarta