Once a year, dentists from around the world meet at the annual congress of the FDI World Dental Federation. This global organization of the world dental profession has 150 national federations from 130 nations. This year's congress was held from September 7 ­– September 10, 2016 at the Convention and Exhibition Centre, Poznan/Poland. In the run-up to this, a meeting of the Section of Defence Forces Dental Services (SDFDS) traditionally takes place, at which the military dental section of the FDI is present and military dentists from all 5 continents are represented. The Executive Officer, LDCR Nanda van Klink (Royal Netherlands Navy Dental Service), managed again this year to put together an interesting scientific programme. As is now considered a worthwhile tradition, a meeting of all the participants was also held in Poznań in a relaxed atmosphere on the eve of the scientific programme. This provided a good opportunity for people to get to know one another and exchange experiences, so that the first good discussions and a lively exchange of ideas could take place across national boundaries in advance of the scientific programme. It became clear that there are some major differences among the armed forces in terms of the organization of dental care provision for their soldiers. There are also striking differences in terms of integration into national health systems.

The scientific programme was opened by Colonel Dwayne Lemon (Canada), a member of  the executive board of SDFDS. Following this, military dentists gave presentations on various topics of military medicine. The space available here does not allow all the presentations to be outlined in detail. For example purposes, however, detailed explanations are provided of particular presentations. On behalf of the host country, Lt. Lukasz Ulanski reported on his experiences while serving in Afghanistan. The figures presented by him show that his experiences are quite similar to the operational experiences of military dentists from other nations. Dental emergencies are predominantly the result of preservation dysfunctions, i.e. complaints due to caries, filling fractures and lost fillings. These are followed by a clear margin by inflammatory periodontal diseases. By consistent implementation of the NATO Dental-Fitness Classification, which is also in use in Poland, the dental service of the Polish Armed Forces is aiming to achieve a reduction in dental emergencies. CDR Manabu Miki (Japan) reported on his operational experiences aboard a destroyer in the Gulf of Aden. Not every Japanese destroyer has a dental treatment facility on board. Where this is not the case, however, the dental treatment is performed in the operating rooms of medical colleagues. CDR Manabu made it explicitly clear that even with consistent dental pretreatment of soldiers, on board dental emergencies cannot be avoided and it’s necessary to keep an appropriate personnel and material treatment option available. How strongly integrated into national health systems some of the dental services of other armed forces are was shown by the presentation given by CDR Dr. Zelvya Purnama Rika (Indonesia). The dental service of the Indonesian navy runs the Indonesian Naval Health School in Jakarta, in which civilian dental assistants are also trained and which promotes the prevention of caries in pre-school and school-age children by means of prevention-orientated programmes. COL Maninder Hundal (India) reported in an interesting presentation on the clinical prosthetic Vision 2030 of dentists of the Indian Army and CAPT Bart van den Heuvel (Netherlands) reported on the first experiences of organizational reclassification of the dental service of the Dutch armed forces. 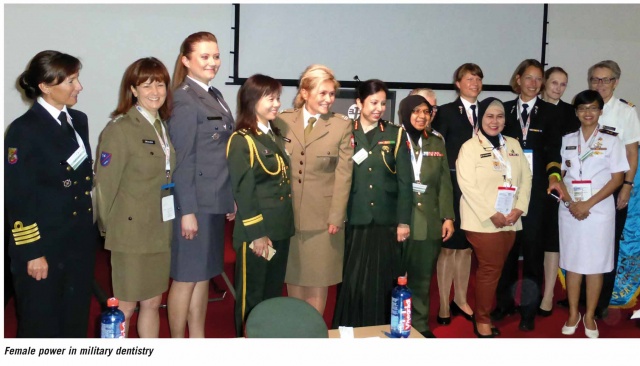 The dental service of the German Armed Forces was represented in presentations by CDR Dorothea Westhoff (Fig. 1) and Lt Col Dr Michael Lüpke. CDR Westhoff reported on the dental examination and treatment of divers and submarine crews in the German Navy. In this group of people, pressure fluctuations and differences which occur under water may lead to barodontalgia. The resulting medical conditions can significantly affect operational capability. Avoiding barodontalgia requires that an extensive and detailed investigation be carried out on the subject and treatment instigated if necessary. Lt Col Dr Lüpke gave a presentation on sleep-related breathing disorders. From the point of view of military medicine, these are relevant in two ways. On the one hand, primary snoring can significantly disturb the comradely peace when sleeping in shared accommodation, but on the other hand it can also have a detrimental effect on the performance of the person concerned when a lack of restful sleep is the result, for example, of an obstructive sleep apnoea syndrome. Depending on various parameters, the provision of mandibular advancement devices can be an effective treatment option in such cases. 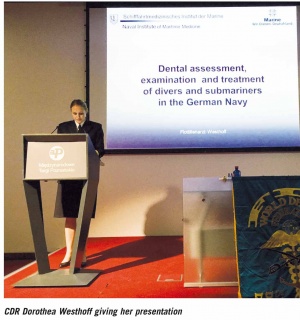 This was an exciting series of presentations, which showed both the current technical state and the organizational state of dental services in the armed forces of different nations and repeatedly made clear which goals are on the agenda for the near future.

Finally, our hosts the Polish colleagues should be thanked for their warm hospitality and the many interesting discussions and information on the history of the polish people. You have contributed so much to the success of this SDFDS meeting. We hope that we will all be able to meet again in the coming year in Madrid/Spain, from August 27 to 30, 2017.