Keeping of peace and security is a „hot” topic in society now. The evolution of peace-making as a process shows that it is built by the team activity of the international organizations and the political will of particular countries, and at its heart is the soldier – peacekeeper and his/her capacity to manage with this role.
The significance of human factor in the peacekeeping operations sets high requirements to the preparation of different categories of military staff of both sexes in order to carry out their tasks and at the same time to survive in risky environment [4].

The authors present results of survey based on answers in a questionnaire held among 59 males and 56 females, military personnel having participated in military missions. The bigger part of man (87%) questioned consider that during mission they are under greater physical pressure than females. More than half of females perceive the loads as equal to those of males (69%) and 31% consider the physical load as lower.

It is clear from the data analysis that during mission the males are feeling more satisfied  than females (53% of males give a positive answer compared to 24% of females) –Р < 0.01. Most females (55%) do not find differences with the military personnel from the other armies during mission, and 27% even consider that they are better positioned. From the distribution of answers „we are at worse position” (40% of males and 18% of females) a picture is formed that females are more positively disposed or males’ criticism is at higher level.

In the next figure (Fig. 1) mutual frequency distribution of respondents is presented within the whole set.

Unusual conditions and extreme situation in which the military staff lives and performs their tasks during international missions are a heavy trial for their morals, will, motivation and professionalism. Throughout the text the results of answers to several questions are presented that have been addressed to male and female militaries related to their stay on mission.

One basic direction in the reform in progress in the Bulgarian armed forces is to achieve a high professional level among the staff of military formations, an element of which is the excellent physical training. This is especially valid for units participating in peacekeeping missions [3].

In the next table (Table 1) the results are presented of answers to the questions by respondents (female and male soldiers) staying on missions, how they evaluate the physical loads in comparison with the opposite sex. 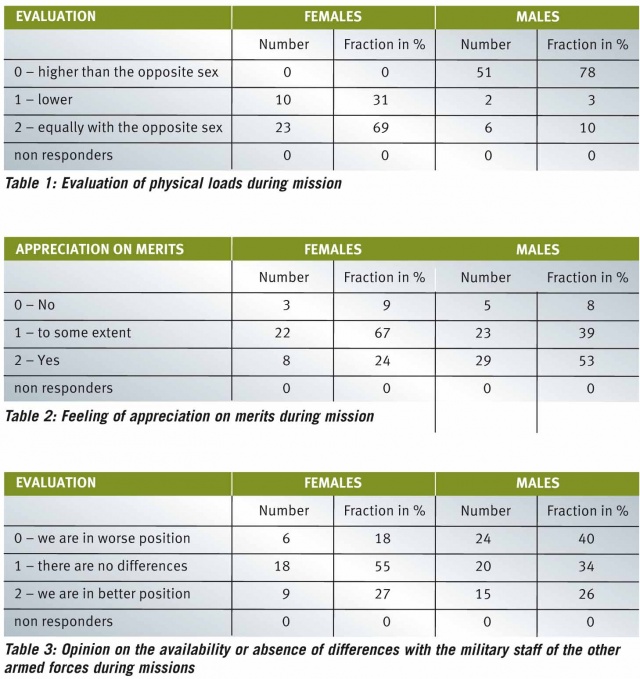 Another issue that has been discussed among the respondents is the feeling of appreciation on their merits. In the next Table 2 the obtained results are shown

It is clear from the data analysis that males are feeling more satisfied than the females (53% of males give a positive answer compared to 24% of females) – Р < 0.01.

Comparing the factor „appreciation” between the females having participated in missions and the remaining female militaries (feeling of not appreciation is for 9% of those participating in missions, and 19.3% of those that have not participated) a statistically significant difference (Р < 0.0001).

The high spirit under the conditions of risky missions (the performance of tasks requires is related also with survival) is of exceptional significance. The bid adaptive, psychological, emotional and physical loads and the various models of activity require adequate approach for stimulating the well-being of the staff [2]. Whether the economic situation in Bulgaria and in Europe in the conditions of financial crisis supposes certain differences in the feeling of identity is a reason for the questing in which category the Bulgarian militaries place themselves compared to their colleagues from the other armed forces [1]. The results are presented in Table 3.

Most of females (55%) do not find differences, and even 27% consider that they are better positioned that the military staff of the other armies. From the distribution of answers „we are in worse position”, (40% of males and 18% of females) a picture is seen in which the females are more positively disposed or males’ criticism is at higher level.It is an interesting fact that among the participants in missions non responders to the questions asked are not found, which may be connected in some way to the special aspects of their personal qualities and professional characteristics.