The 2nd Working Conference of the Naval Officers in the Bundeswehr Medical Service was held in Wilhelmshaven from 18 to 20 April 2018 at the invitation of the Surgeon General of the German Navy. 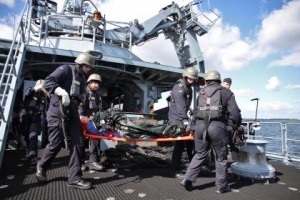 The 2nd Working Conference of the Naval Officers in the Bundeswehr Medical Service was held in Wilhelmshaven from 18 to 20 April 2018 at the invitation of the Surgeon General of the German Navy. Rear Admiral (MC) Dr Stephan Apel welcomed the participants and opened the conference which this time focused on the consequences for the Navy Medical Service of the realignment of the Bundeswehr towards national and collective defence. This was also reflected in the conference's motto: "The Naval Medical Service between individual and collective medicine". The Chief of Staff of the Headquarters of the German Navy, Rear Admiral Thorsten Kähler, kicked off the round of presentations with an analysis of the German Navy's current situation. He gave a detailed account of the present security policy framework and its implications for the Navy, and subsequently addressed the current developments in the Navy's material and personnel situation. Rear Admiral Kähler concluded his presentation by outlining the Naval Medical Service's role in the Navy's national and collective defence mission.

Captain (MC), German Navy Reserve, Prof Dr Hans Anton Adams - former ship's medical officer, former naval medical company commanding officer, former senior medical officer of the former Destroyer Flotilla, and, until his retirement, head of the staff unit for interdisciplinary emergency and disaster medicine (INKM) of the Hannover Medical School - used his wealth of personal experience and the historical context to discuss the present tasks and challenges faced by the Naval Medical Service between individual and collective medicine from an ethical point of view. Based on his wide-ranging experience in emergency medicine he gave a vivid portrayal of the problems to be faced by the individual Navy Medical Corps member and offered solutions.

Colonel Paul Reynolds, Assistant Chief of Staff, JMed, NATO Allied Joint Force Command Brunssum, gave a presentation on the "Challenges and dimensions of medical support in a modern collective defense scenario". In recent decades, NATO's focus has been on crisis intervention and crisis management. The capacities and capabilities of the nations' medical services were adapted to this tasks, and, as a result, the number of operational medical facilities in particular was considerably reduced. Using exercise TRIDENT JAVELIN 17 with 250,000 participants as an example, he pointed out the current deficiencies in the medical support available for collective defensive action. For instance, the national infrastructure and medical capacities required to ensure the timely evacuation and treatment of the 19,000 wounded assumed to be incurred during the exercise do not exist.

Commander (MC ) Dr Beste, Assistant Chief of Branch Planning I 4 of the German Ministry of Defence, delivered a presentation titled "Ärztliche Versorgung an Bord in Krise und Krieg - Stimmt unser Mindset noch?" (Onboard medical support in crisis and war - do we still have the correct mindset?). He showed the discrepancy between the current medical support options available onboard which are optimised for the individual medical treatment and care for a maximum of two seriously injured patients and the expected large number of wounded with bone fractures, burns and hypothermia caused by a hit on a unit. Based on his observations, Commander (MC) Dr Beste suggested rethinking the approach towards the future onboard medical support, and allowing preparations for wartime medicine to be envisaged in addition to individual medical support.

Thursday started with an ecumenical church service. Afterwards, Captain Klüver, Chief of the Policy/Force Planning/Force Providing Branch of the Headquarters of the German Navy, presented an overview of the current missions and the associated challenges posed to the Naval Medical Service.

Commander Schneider, Head of the Naval Development/Capability Management Branch, delivered a presentation titled "Marine 2030 - Quo vadis?" introducing the key points and targets of the German Navy's development in the next decade. Subsequently, he set out the implications of this development for the Naval Medical Service from his point of view.

Commander (MC) Mock, of the Federal Office of Bundeswehr Personnel Management, presented the personnel and career development policy for medical officers. In his presentation, he discussed the implementation of the personnel assignment concept for naval medical officers, possible naval career models and the current regeneration planning for senior officers (medical doctors) of the Medical Service.

The medical part of the working conference was introduced by Colonel (MC) Dr Lieber, Chief of the Thoracic Surgery Branch of the Berlin Bundeswehr Hospital. In his presentation on the possibilities and limits of onboard damage control surgery (DCS) Colonel (MC) Dr Lieber set out the differences between DCS in the civilian environment or land deployments and DCS in maritime deployments.  He showed that limited surgical measures carried out to stabilize patients and establish their transportability can be used to extend the individual patient's survival time and to compensate for the increased mortality and morbidity caused by the adverse spatial and temporal factors in the maritime environment. However, this requires consistent postoperative monitoring and surgical follow-up intervention within a tightly defined time frame.

In a second presentation, Colonel (MC) Dr Lieber discussed the options available to ship's doctors to surgically treat acute life-threatening hemorrhage aboard ship. As the efficient arrest of hemorrhage is essential for the patient's onward transport and chance of survival, he gave a detailed account of the options available on board, such as compressing the bleeding, the application of tranexamic acid prior to a transfusion, or the transfusion of blood and blood substitutes. In particular, he addressed fresh whole blood transfusion as a method to transfuse whole blood. Furthermore, he outlined the possible use of REBOA (resuscitative endovascular balloon occlusion of the aorta) for the temporary occlusion of the aorta.

Commander (MC) Dolu, of the anesthesia and intensive care department at the Hamburg Bundeswehr hospital, gave a presentation on states of shock aboard ship, volume replacement, hemostaseological options and also on fresh whole blood transfusion.

The third day of the working conference was opened by Commander (MC) Dr Beinkofer, chief of the gynecological department at the Westerstede Bundeswehr hospital. Using illustrative examples of cases, she presented some gynecological emergency situations and set out the possible measures to be taken by the ship's doctor based on the respective cardinal symptoms. Finally, she described the procedures and risks of giving birth aboard ship and outlined the care of newborns.

The head of the research and development branch of the Institute for Safety Engineering/Ship Safety in Warnemünde, Dr Meißner, provided an overview of trends in and predictions on the future development of maritime safety. With a view to a life at and with the sea, Dr Meißner presented a wide variety of aspects related to future maritime developments. She discussed new fuel types and propulsion concepts, food production and the extraction of raw materials as well as climate change and digitisation. During her presentation, she raised numerous thought-provoking points on issues like the excessive strain put on humans by the digitisation, the management of civilian underwater traffic or the decommissioning or disposal of disused offshore installations.

The remainder of the conference was dedicated to the topic of telemedicine. Commander (MC) Ring gave an account of the current situation and the further development of naval telemedicine. Following that, telemedical procedures were practically demonstrated by showing a diving medical case dealt with in a live communication with a unit at sea. Finally, Commander (MC) Kellermann of the Hamburg Bundeswehr hospital demonstrated the use of teleradiology as part of telemedicine using the example of a radiological case.

Rear Admiral (MC) Dr Apel summarised the results of the conference. He expressed his hope for a large audience, also of young colleagues, to attend the conference to promote intergenerational exchange. Subsequently, the Surgeon General of the German Navy bade the audience of the 2nd Working Conference of the Naval Officers in the Bundeswehr Medical Service farewell.

Next year the working conference will again be held at the GORCH-FOCK-Haus in Wilhelmshaven, probably in the penultimate week of March (20 to 22 March 2019). Uniformed Navy personnel interested in attending may already contact the conference office of the Naval Medical Service Directorate, German Navy Headquarters at MarKdoSanTagungsbuero@bundeswehr.org in order to be added to the list of invitees.