Hospital on the High Seas

Bumps, bruises, and third-degree burns – just like their colleagues on dry land, naval physicians have to be ready for anything.

The patient – a crew member – was suffering from a high fever, an intense headache, and he was shivering. His mouth was dry as dust, his muscles ach­ing. As if that wasn’t enough, he also had diarrhea and nausea – both much more prominent than would have been the case for a normal dose of influ­enza. The ship’s doctor, Commander MC Dr. Axel Haber, was in­formed, and he suspected he had his first case of swine flu to report.

The case occurred last year, the symp­toms of the disease first presenting them­selves three days after the German Navy frigate Sach­sen had cast off from the port of Halifax in Canada. Due to the danger of a global pandemic, Haber and his colleagues had to take strict precautions: The sailor was quar­antined and all the crew members were treated with the influenza drug Tamiflu. “Fortunately, we were at sea for so long that by the time we entered Liverpool on the other side of the Atlantic, the patient has already recovered and the other crew members were beyond the incubation period. So, we were sure that none of the other sailors would be infected,” Haber recalls. 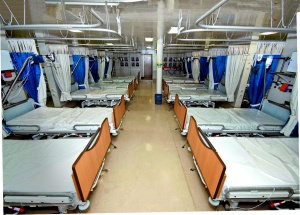 It looks almost like a regular hospital below deck, if a little cramped. Dr Axel Haber has access to a fully equipped operating room (left) and can also consult land-based specialists via satellite communications.

His workplace, the Task Force Support Ship Frankfurt am Main, is a double-hulled steel colossus with a length of al­most 174 meters, a beam of 24 meters, and a draft of 7.4 meters – making it the largest craft in the German Navy. It is powered by two diesel engines that de­liver a combined output of 14,500 horse­power (5.28 megawatts each) and pro­pel the 20,000-ton vessel to a maximum speed of 20 knots (approximately 37 kilo­meters per hour). The job of these Berlin-class vessels is to provide logistical sup­port to German naval units on missions abroad – including provisions, fuel, spare parts, and also medical care.

For the latter purpose, the vessel is equipped with a mobile naval hospital. This consists of fixed onboard installa­tions as well as a two-story assembly of 26 special shipping containers – 20 and 30 feet in length – mounted on the upper deck. The containers which are painted gray contain a variety of treatment and diagnostic facilities, including two oper­ating rooms, an intensive care unit, an X-ray unit, various labs, and even a dental unit. They can accommodate up to three medical teams working simultaneously. “If we don’t have a dentist on board, I’ll handle the drill myself,” says the Ham­burg-born Haber, whose general medical knowledge must encompass a number of disciplines.

The kinds of cases that Haber encoun­ters can range from bumps and bruises to crush injuries caused by bulkhead doors – all the vessel’s cabins are pressur­ized – to severe burns, resuscitations, and even, on one occasion, an ectopic preg­nancy on the part of a female sailor.

“As a rule, medical emergencies on naval vessels generally involve trauma, while those on other vessels such as cruise ships tend to involve internal complaints,” Haber explains. There are, however, some basic similarities. In both cases, the ship’s doctor is responsible for all aspects of the patient’s wellbeing – as used to be the case with all doctors, be­fore specialization fragmented the medi­cal profession on land. For example, they even treat small wounds right until the healing process is completed.

The advantage of treating patients on­board ship is that they can’t disappear. “I can take a close look at my patients every day,” says Haber. And should there be any­thing out of the ordinary, he’s already on the spot to take direct action. At most, a call to the bridge is required, and then the distance to the patient is no further than in a normal hospital ward.

Support from specialists on land

Every vessel in the German Navy has its own ship’s doctor. The sick bay team on a frigate, for example, can comprise up to five people: a ship’s doctor, an assis­tant ship’s doctor, two medical NCOs, and an enlisted medical orderly. On a task force support ship, there are eight more crew members, including two medical tech­nicians. Should this prove insufficient, onboard medical teams can also request telemedical support from doctors in Germany – via the German navy’s own Medical Insti­tute. “We have a workstation on board from which we can send diagnoses, X-rays, ultrasound images, and video se­quences from anywhere in the world back to Germany for consultation with specialists,” says Haber.

And how would he deal with a case of psychosis? Haber explains that this has been known to occur and that it is one of the few reasons for removing a sailor from the ship, for example if a patient threatens to jump overboard. It is cru­cial to recognize any psychological changes in any crew member as early as possible. For difficult cases, there is also a military chaplain avail­able. Things don’t usually get to that stage, though. “After we’ve been on board for a few weeks, I often know the sailors so well that I’m able to judge how resilient they are,” says the ship’s doctor. One factor that makes this possible is the relatively small crew on board – around 200 sailors compared to the 4,000 or so stationed in a garrison. If need be, the doctor can provide individual care for every sailor on board.

Haber has just gotten to know a new crew. In January, the Frankfurt am Main left its home port of Kiel in northern Germany for a five-month voyage to South Africa as part of a naval task force and training unit. During the course of this voyage, more than 200 cadets will complete onboard training. It is the trainee officers’ second voyage, following a sailing course last fall on board the training barque Gorch Fock.

Haber himself has obviously been to sea many more times than that. Five years from now, his 17 years of naval service will come to an end.