From the department of anaesthesiology, resuscitation and intensive care of the field hospital of Central Airmobile Rescue Team of EMERCOM of Russia

The problem of crush syndrome management still remains urgent over a period of two hundred years. Medical consequences of earthquakes and medical organization of emergency response do not have a full scientific development so far. The technology of medical aid rendering in case of the extrication of a victim with crush syndrome who is trapped under the debris is described in literature but there is no common opinion concerning the tactics and continuity of the treatment of such pathology in emergency area in case of mass medical losses. It concerns the issues of management and prevention of ishaemic endotoxicosis during extrication, rendering of qualified medical aid in field hospitals in emergency area, surgical tactics, infusion therapy methods and validity of active detoxification methods application at the stages of medical evacuation before admission of victims to specialized medical facilities outside emergency area.

Victims often lose their lives under the debris (isolation phase) waiting for rescuers and physicians. Due to the developed ishaemic endotoxicosis the mortality rate at the stages of medical evacuation is high as well. Our practical experience enables us to draw the conclusion that treatment tactics and crush syndrome prevention should be flexible and adapted to the conditions of a certain emergency taking into account the scale and structure of medical losses, disaster nature and geographic location. The US National Guard renders the first medical aid by means of rapid helicopter evacuation of a victim from emergency area to a specialized medical facility. In emergency area paramedics render medical aid essential for the support of vital organs. Such tactics is adhered to if air evacuation transport is ready and if there is no delay in victim’s extrication. We applied it practically in Indonesia (a 8.0 earthquake, 2008, Nias Island, Indonesia) in cooperation with the air forces of the US Navy Marines. The victims were evacuated to the USNS Mercy (T-AH-19) hospital ship only after the complex of intensive therapy and the stabilization of their condition in the field hospital of EMERCOM of Russia was performed.

In case of mass medical losses and lack of triage of victims according to their condition severity these conditions are absent. Such victims should be rendered medical preventive measures on site in emergency area. Our experience enables us to conclude that basic anti shock measures and victims’ condition stabilization should be performed at the extrication site and at the stages of evacuation. Evacuation delay will be well-grounded due to objective reasons. In conditions of emergency it will enable to reduce ungrounded mortality rate at the evacuation stages.

It is not possible to perform quick and targeted evacuation to specialized medical facilities from emergency area during the first several days. In our opinion the concept concerning immediate evacuation of victims with severe traumas to a hospital base in conditions of mass medical losses is impracticable. This conclusion is corroborated by our practical experience in emergency response during the earthquakes in Turkey (2001), Iran (2003), Indonesia and Pakistan (2005), China (2008) and Haiti (2010). Arising panic and stress conditions (stupor and feverish activity) concerns not only the victims themselves but a part of survived local medical personnel who are practically not always able to take charge. It can be explained by the fact that during the first days there is nobody to perform the triage according to the condition severity and in fact there is no possibility to transport the victims to a specialized medical facility from emergency area. It is caused by the destruction of roads, air fields, hospitals and remoteness of specialized medical facilities.

Rescued victims who were evacuated from emergency area are concentrated at air fields and in refugee camps. The lack of food and water in supply, high concentration level of victims and refugees have a negative impact on the quality of medical aid. In such situation it is impossible to discuss any qualified medical aid and rendering specialized medical aid all the more. According to the literature analysis and our practical experience we came to the conclusion concerning the lack or impossibility of carrying out the full complex of preventive medical measures among the victims with crush syndrome at the stages of evacuation to a specialized medical facility. It is caused by a range of objective factors:

In our paper we recount our opinion concerning medical and preventive complex which is carried out to the victims with crush syndrome directly in emergency area.

Generalization of the experience of complex treatment of the victims with crush syndrome with the application of membranous plasmapheresis without apparatus (MPPA) in the field hospital of EMERCOM of Russia in case of elimination of medical consequences of earthquakes (Indonesia and Pakistan, 2005, China, 2008, Haiti, 2010).

MATERIALS AND METHODS OF STUDY 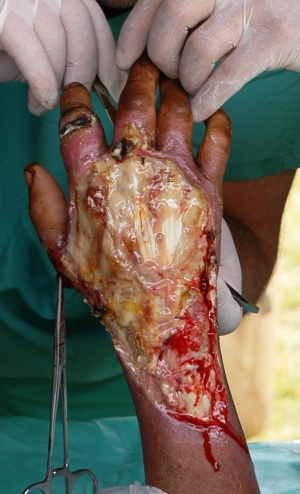 The complex of medical and preventive measures carried out by the medical service of the field hospital of EMERCOM of Russia for the victims with crush syndrome in emergency area comprises of 2 stages.

The first stage is performed directly by the physician of USAR team on the site of victim’s extrication from under the debris:

The complex is performed in the operating room and anaesthesiology and resuscitation unit of the field hospital:

This complex of medical preventive measures was used among 38 (19 males and 19 females) victims with crush syndrome in the field hospital of EMERCOM of Russia in Pakistan, China, Indonesia and Haiti (earthquakes of 7,0 – 8,5 magnitude on the Richter scale). 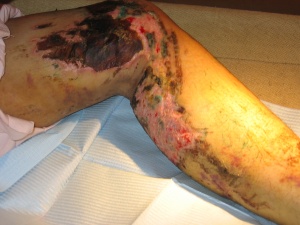 Figure 3: The results of the complex treatment. Granulation can be seen on a crushed extremity.

Extrication period: up to 48 hours – 25 persons, more than 72 hours – 13 persons. All victims were in the state of apathy, conscious level was 12±2 according to Glasgow coma scale. During the examination of compressed extremities pathological changes were noted: from hyperaemia to cutaneous surfaces necrosis, intracutaneous and subcutaneous haematomas. Tubular bones fractures were observed among 14 victims. Pathological changes of tissues up to necrosis with purulent and septic complications were observed among 17 victims. 1 victim had a totally crushed foot. The movement in the joints of affected extremities was highly limited due to the compression along with a growing edema. The pulsation in the distal parts of arteries was weak or uncertain. The loss of sensitivity in the compression zones and lower was observed among 23 victims. Their severity condition according to Glasgow coma scale was 12±1, according to APACHE II - 29±4. Tendency towards hypotension and tachycardia, hyperthermia in the range of 37,8 - 39°С, increase of short breath were observed. During the admission of the victims with crush syndrome: Hb 95±3,7 g/l,  Ht 42±2,1 %, ESR 36±5, white blood cell count left shift, total protein 54,8±3,1millimole\l, urea13,0±1,7 millimole\l, blood glucose 6,8±0,6 millimole\l, Na 137±2 millimole\l, plasma potassium 6,5±0.2 millimole\l. Myoglobin level was not tested due to the lack of special laboratory equipment. All above-stated factors indicated the development of endogenous intoxication syndrome development. Field hospital admission period was from several hours up to 5 days.

All victims were evacuated to specialized medical facilities (the distance from emergency area was up to 200 km) accompanied by physicians. No mortality was observed during their admission in the field hospital and at the stages of evacuation.

The tactics of treatment of the victims with crush syndrome should be flexible and adapted to each certain emergency. MPPA application enables to reduce the rate of complications and mortality. MPPA is a method of choice of extracorporal homeostasis correction among the victims with crush syndrome in field hospitals in emergency area. We suggest that in case of mass medical losses during emergency response the volume of qualified medical aid should be expanded by means of specialized medical aid (efferent therapy methods) in conditions of field hospitals. The application of MMPA at the early stage of medical aid rendering in emergency area enables to reduce the development of severe endotoxicosis types which result in multiorgan failure syndrome and acute renal failure development.