In case of blast injuries accidental inclusions of intradermal pigmented particles occurs. If there is no removal within 72 hours traumatic tattoos results. To avoid these pigmented changes, especially in areas like the head and neck region and the hands, the primary goal in first treatment is to remove all particles and foreign bodies. Superficial foreign bodies can easily be removed by brushes or dermabrasion. Deeper lesions are a challenge for surgeons, because they are not so easily to remove. Ablation by a water jet surgical tool, the Versajet™-system, enables the removal of nearly all particles and foreign bodies, who sustained a blast injury of the face or the hands.

In 2011 and 2012, 5 patients with blast injuries in combination with accidental inclusions of intradermal pigmented particles were treated in our hospital. All patients were admitted within the first 3 hours following the injury. During admission in the burn unit a wound debridement and foreign body extirpation under general anesthesia was performed. This procedure took 65 to 120 minutes depending on the number of foreign bodies. In contrast to the further treatment strategy in the department, when the particles were removed by dermabrasion, using a brush and physiological saline solution the foreign bodies were ablated by use of the hydrosurgery tool Versajet™.

In all cases  a standard hand-piece Versajet™ Plus, with a 45 degree angled tip and a 14 mm working window was used. The operation was closed by the uptake of a dressing (Omiderm™). The wounds healed in all cases with no complications at two weeks; 6 months postoperatively no significant scar formations are visible.

Fig. 1: (A, B) Examination findings at admission to the hospital, with multiple foreign body tattoos within the eyes, eyelids, nose and forehead. (C) After debridement with the VersajetTM-hydrosurgery-system. (D) Postoperative findings after six months.

A 39-years old male patient had an industrial accident whilst welding. The explosion caused a blast injury with facial traumatic inclusion of foreign bodies. The patient was admitted 30 minutes following injury. During admission on our burn unit, physical examination revealed an irregular pattern of deeply embedded fine and rough particles 1 to 4 mm in diameter that affected the nose, cheeks, forehead and both eyelids (Figures 1 A, B).  An injury of the medial corner of the left eye was treated surgically whereas the VersajetTM-hydrosurgery-system was sufficiently used for wound debridement and foreign body extirpation under general anesthesia (Figure 1 C). For the surgical procedure we used a standard hand-piece with a 45 degree angled tip and a 14 mm working window. Conjunctivas and lenses of both sides were cleaned under the operation microscope. The operation was closed by the uptake of a dressing (Omiderm™). The wounds healed with no complications at two weeks; 6 months postoperatively no significant scar formations are visible (Figure 1 D). Visual acuity is reduced of about 20 percent. 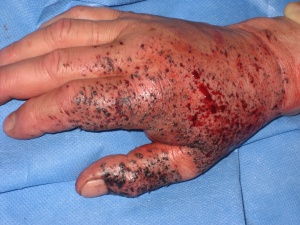 Fig. 2: A 24-year-old patient with a blast injury by an explosion of firework with foreign bodies incorporation in his right hand. The use of the Versajet system allowed for a suc cessful removal of foreign body particles with good functional and aesthetic result.

In case of accidental inclusions following blast injury, surgical debridement is necessary to avoid traumatic tattoos, especially in the most commonly affected, visible regions as head, neck and hands (1;2). Best results are gained by immediate and complete removal of foreign-pigmented matters throughout the initial wound care. In general superficial foreign bodies could easily removed by brushes. So far, persistent deeper particles which were removed by dermabrasion (3), surgical excision, cryosurgery, electrosurgery or laser treatment. Despite these arrangements, visible scar formations can result (4;5).

Deeply embedded pigmented particles that were not removed turn to traumatic tattoos. By use of Q-switched Nd:YAG short-pulse laser a fragmentation of the particles without thermal damage to adjacent structures is achieved (6-8). Possible complications by use of this method were described by Fusade (9). In 3 cases he observed hypertrophic scars and spreading of pigments in the skin around the initial tattoo following inclusions of gunpowder. Depending of his clinical experiences, Sunde stated that carbon dioxide laser may prove to be useful in the delayed treatment of traumatic tattoos (10). Cambier achieved good and excellent results following removal of traumatic tattoos by use of an variable pulsed Erbium:YAG laser (11). In comparison with later dermabrasion, the laser procedure was more reliable and causes fewer side effects. El Sayed made good experiences by the use of a Q-switched ruby laser for the treatment of traumatic tattoos (12). Two conditions should be respected, the low fluency and the pre-treatment test zone.

A good option for removal of traumatic inclusions in initial care after admission to a hospital is the use of the Versajet™-hydrosurgery device. This tool works by a high velocity water jet via an angled hand-piece, which allows removal of tissue in precise manner. The sterile saline stream runs through the opening of the hand-piece, tangential to the body surface. The pressure can be varied up to 10 steps. Especially in the lower settings the Versajet™-system has a very good cleaning mechanism. Additional to the irrigation, the Venturi effect creates a localised vacuum that removes surface debris, which is sucked into the machine together with the irrigation fluid. The surgeon is able to prepare and cut injured tissue or foreign particles while aspirating debris by suction.

There is a use of water jet surgical tools in general surgical procedures (13-15), surgery of bone (16) or brain (17). Following further developments, techniques with the Venturi-effect were established for the debridement of contaminated wound surfaces. First experiences in the use of the Versajet™ tool in burn surgery were published since 2005 (18-20). The water jet allows a precise debridement of thermal damaged tissue. In comparison with conventional techniques with fixed settings, the Versajet™ system allows fine adjustments and protects vital tissue. Especially in contoured areas of the face, a precise debridement is possible by the use of a water-jet system. As an additional effect, Rennekampff describes a possible lower bacterial load in burn wounds (19). In comparison with dermabrasion, Cubison reported a lesser environmental contamination (18). The surgical procedure should close by the uptake of a biological dressing like Omiderm™ (18).