FIELD HOSPITAL OF EMERCOM OF RUSSIA

The Field Hospital (FH) of the Federal State Institution “Central Airmobile Rescue Team” of the Ministry of the Russian Federation for Civil Defense, Emergencies and Elimination of Consequences of Natural Disasters (EMERCOM of Russia) is a medical and evacuation unit. It is used for emergency qualified medical aid rendering to the affected population directly in emergency areas or at the sites designated by the Task Force Leaders during the elimination of emergency consequences as well as humanitarian operations.

The FH is called “airmobile” due to one of its delivery methods to emergency areas. The main method of the FH delivery is by air. If needed the FH equipment is air-dropped using cargo platforms; medical and engineering personnel are transported to the site of hospital deployment by means of personal and tandem parachutes. Other methods of personnel and equipment delivery are also possible – by vehicles and helicopters. The FH is formed on the basis of quick-mounting pneumo-framed modules united into a single complex and supplied with medical equipment, medicine, dressings and life-support systems. The hospital is ready for victims’ admission in 40 minutes after the transportation to the site of deployment. The full deployment of the hospital is completed in 3 hours.

Hospital configuration can be altered taking into account the size of the area where it should be deployed as well as climatic conditions. The system of module pneumatic framing enables to make changes in manpower and resources in case of mass admission of the wounded and injured.

The main tasks of the FH of EMERCOM of Russia are:

1.    Reduction of groundless mortality in emergencies. These are lethal outcomes among the victims who did not timely receive appropriate medical aid in the area of emergency consequences elimination.

4.    Victims’ medical support to the evacuation sites including air transportation to remote hospitals in Russian and abroad.

The FH medical activities are carried out under the licence for the certain types of medical care (32 types) and organizational and staff possibilities of the Federal State Institution “Tsentrospas” of EMERCOM of Russia. 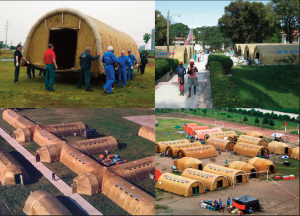 The hospital staff is comprised of medical doctors and nurses of various medical specialities. The doctors are surgeons, traumatologists, specialists in anaesthesiology and resuscitation, a therapists, an infectious diseases specialist, a paediatrician, an obstetrician-gynecologist. The nurses are anaesthetic nurses, scrub nurses, surgical and dressing nurses and intensive care nurses. The FH medical personnel consists of 34 persons and engineering personnel consists of 24 persons.

The first option of the FH deployment comprises of triage department (a module), surgical and dressing department, resuscitation and intensive care department (4-6 beds), in-hospital department (12 beds). Such FH option provides the possibility to render assistance to up to 50 persons per day taking into account outpatient medical assistance and simultaneous hospitalization of up to 16 persons. The FH is self-sufficient for up to 14 days in emergency area.

The full option of the FH deployment is used for the hospitalization of up to 100 victims and admission of up to 100 victims. It comprises of triage department (a module), surgical department with recovery room, 2 surgical departments, resuscitation department (4-6 beds), 3 in-patient departments (12 beds each), obstetrics and gynaecology department, diagnostics department, 2 outpatient departments and a module for irretrievable losses. The period of the FH operation is determined by the immediate medical situation and requires the resupply of the consumable materials after 14 days of work. In case of the FH full deployment emergency qualified medical aid is rendered with a possible hospitalization of up to 50 persons. The beds number can be increased on account of in-patient departments. The possibility of outpatient victims’ admission is up to 100 persons per day. Emergency qualified medical aid is rendered by medical personnel of up to 50 persons. 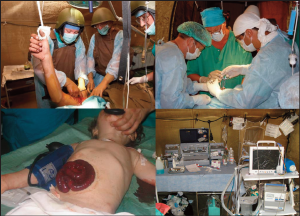 Taking into account the experience of operations in emergency area it should be noted that the FH deployment in emergency area creates positive psychological effect among victims, strengthens their confidence in medical aid receiving. During the triage victims are divided into two groups – outpatient and inpatient. The victims who are referred to the in-patient department of the hospital are divided into three groups according to the urgency of qualified medical aid rendering:

Group 1 – urgent measures are needed, their absence threatens with the victims’ death in the nearest hours.

Group 2 – victims’ life is not endangered at the moment, but remedial measures are needed, if they are not timely provided it will result in severe complications development and victims can move to Group 1.

Group 3 – remedial measures are needed the delay of which will not result in complications under the condition that antibiotics are used.

During medical triage of the victims Group 4 is sorted out – the moribund and dead.

The victims with acute therapeutic pathology are hospitalized for the period of their coming out of a critical condition and for subsequent evacuation. The full range of outpatient and qualified medical aid is performed in the cases when the number of the victims who are admitted to the hospital does not exceed hospital capabilities. The reduction of medical aid range is possible only in case of a considerable hospital overload and it is carried out on account of the renunciation of the measures from Group 3.

Upon admission of the victims who need emergency qualified medical aid the urgency of surgeries is taken into account. Such surgeries are divided into 4 types:

Type 1 – emergency surgeries, their absence threatens with the victims’ death in the nearest hours.

Type 2 – urgent surgeries, their absence endangers victim’s life, but the delay of 2-8 hours will be justified by the elimination of the condition which threatens victim’s life and preoperative preparation of the victim.

After emergency and urgent surgeries victims are referred to the resuscitation department and become temporally non-transportable. The period of hospitalization depends on the injury nature, surgery type, general condition and transport type for possible evacuation.

Hospital service equipment provides for the system of either mechanical or bacterial water purification the capacity of up to 3 000 liters per day. The device for water quality and bacteriological contamination assessment is the part of the FH equipment. Chemical disinfection of the water can be performed (water chlorination) if needed. The field kitchen Karcher is used for cooking meals for the FH personnel and patients. It has the possibility to provide three meals for up to 200 persons per day. For the FH power supply the electric generator (30kW), supply voltage of 220 V as well as mobile electric generators of less power are used. If possible the hospital can be connected to the external power supply system. The FH life support system includes air conditioners to ensure the microclimate in the most functionally important rooms. Diesel fuel is needed for the hospital functioning using its own power supplies (600 liters per day).

Maintaining medical records (anaesthesia records, the records of victim’s supervision and performed therapy), the control over carried out treatment and drugs inventory enables to perform further analysis of the hospital functioning.

In case of carrying out the intensive care in critical conditions the syndromic approach for the victims’ condition assessment and approved algorithms for their treatment are used. The system of instant diagnosis which enables to perform corrective therapy is used. Medical equipment satisfies the requirements of the international standards. It is mobile, light-weight and is packed into small containers for safe transportation.

The availability of satellite communication enabled to solve the issue of telemedicine application in the hospital. Telemedical conferences were carried out in Sri Lanka and China; more than 40 video consultations were performed. The application of such video consultations (video conferences) enables to increase the quality of the rendered qualified medical aid and enlarge the range of curable pathology directly in the area of elimination of medical and sanitary consequences of emergency.

The Field Hospital of EMERCOM of Russia functioned during elimination of the consequences of natural and humanitarian disasters in the former Yugoslavia, Turkey, Iran, Afghanistan, Indonesia, Sri Lanka, Pakistan, China, Haiti and Chile, during the hostages rescue in Beslan city, during elimination of medical and sanitary consequences of Georgia and Ossetia armed conflict. 1235 surgical procedures were carried out using general and local anaesthsia. Intensive care was performed to more than 2 000 victims. Qualified medical aid was provided to more than 17 000 affected citizens of the Russian Federation and foreign states.