Conflict over the last three decades has resulted in profound disruption of the medical system in Afghanistan. The NATO Training Mission–Afghanistan (NTM-A) installed a graduate medical education (GME) advisory team with the mandate to help the Afghan faculty reconstruct modern teaching programs for core specialties including programs for assistant personnel.

Conflict over the last three decades has resulted in profound disruption of the medical system in Afghanistan. Much of the damage was done as part of a destabilizing process that affected society as a whole.  Medical personnel and hospitals however, were also directly attacked in a presumed effort to demoralize the population and undermine the government resulting in many physicians being killed or forced to flee.

Universities in Afghanistan have always been at the centre of political debate. For long periods during the conflict, universities were unable to function. Loss of physician-educators, safe hospital learning environments and university support resulted in the collapse of the postgraduate medical education system. Few doctors and no new specialists were being graduated in a country with a population of 30 million. The loss of one year’s output of doctors would stress a developed country. The prolonged loss of most doctors and all specialists is devastating for a developing country.

Security is an essential requirement for reconstruction. Following its combat contribution to the International Security Assistance Force (ISAF) in Afghanistan, Canada participated in the NATO Training Mission–Afghanistan (NTM-A) with a mandate to consolidate, standardize and strengthen the training and professional development that the Afghan national security forces had been receiving from ISAF since 2006. The goal was to “support the Government of the Islamic Republic of Afghanistan as it generates and sustains the Afghan national security forces, develops leaders, and establishes enduring capacity in order to enable accountable Afghan-led security”.

Kabul University Medical School was founded in 1932 with the help of a Turkish medical mission. From 1947 to 1963, French teachers supported the school and many of the Afghan faculty were trained in France. In 1962, a second medical school at Ningrahar University in Jalalabad was founded with the help of American faculty members. By 1975, both schools had exclusively Afghan faculty graduating approximately 200 doctors per year. It was estimated by a Canadian volunteer mission to Afghanistan that there were 1600 physicians in the country of whom 170 were women. In the late 1970s, support for medical education switched to the Soviet Union in accordance with political events. The Armed Forces Academy of Medical Sciences (AFAMS) was established in Kabul with a modern hospital and medical school. In the years that followed, these well-established modern institutions were severely undermined by 25 years of conflict and misrule.

NTM-A located a graduate medical education (GME) advisory team at AFAMS. While the immediate goal was to sustain the gains made by the Afghan National Security Forces, it was hoped that the effort there would have a leadership effect on the civilian medical establishment through collaboration with the Afghan Ministry of Public Health (MOPH). The objective of the GME team was to help the Afghan faculty reconstruct modern teaching programs for core specialties including: general surgery; internal medicine; anesthesia; orthopedics; urology; otolaryngology and public health. Later at the insistence of local faculty, programs in neurosurgery and critical care were added to the mandate. Parallel to these efforts, assistance programs were undertaken for training of nurses, laboratory technicians and combat medical technicians and a new program to train physician assistants was established. 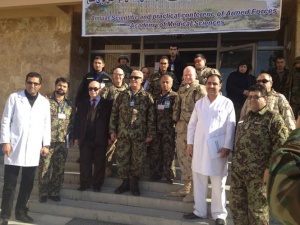 The GME team found a highly motivated Afghan faculty with a variable level of training and experience. While the oldest members of faculty had French training, most senior officers were Russian trained. Younger doctors had informal training but some had trained in Pakistan. Pashto and Dari are the national languages of Afghanistan. Dari was the language of instruction at AFAMS. The faculty produced documents dating back to the 1960s which outlined a curriculum of GME training for some medical specialties. The GME advisors were from the United States and Canada. Documents were provided to them by the Accreditation Council of Graduate Medical Education and the Royal College of Physicians and Surgeons of Canada. It was important for the advisors, who were all experienced academic physicians, not to usurp the role of Afghan faculty in either the operating room or the class room. Ownership of revised curricula could only be achieved if local faculty members were their primary authors.

Initial attempts to develop writing committees were resisted. Confidence had to be developed through practical projects such as advisor participation in ward and grand rounds. Advisors worked in groups of two or more with one member performing security duty (guardian angel) at all times. Despite being armed and fully dressed in personal protective equipment, guardian angels who were known to the students were often approached for teaching and advice. The concept of a journal club was promoted to a very positive reception. Supervising committees were eventually struck so that these meetings were Afghan led, independent of outside assistance. The success of initial intimate meetings led to the arrangement of special topic national meetings, which, due to the relative safety of the AFAMS compound, were attended by delegates from around Kabul and Afghanistan. The faculty at AFAMS began to exert a national leadership in medical affairs.

Writing committees were again struck for the purpose of redeveloping residency training programs in the specialties listed above. This initiative was met with great enthusiasm and MOPH supported the venture. While AFAMS would implement the programs for military trainees, care was taken to comply with MOPH regulations and advice so that the materials could be adapted by civilian institutions. Advisors were a resource for committees but again Afghan ownership and control were essential. Using the 1960s Afghan documents and modern American and Canadian curricula, new programs were designed for Afghanistan as an emerging modern country. A new concept that required study was the reduction of modern curricula into core competencies. Integration of core competencies into training plans and evaluations was patiently accepted even though there was an appearance of redundancy. Practicing specialists on the committees requested that greater detail be given regarding tests of competence during each phase of training. In this matter, Afghan curriculum writing committees anticipated the modern trend to incorporate milestones into training. The systems used in the United States were blended with those of Canada and written in a manner compatible with the tenets of Islam. The language of the documents was Dari.

At the time of writing, Afghanistan's first physician assistants have graduated. Residency training programs have students in each year and MOPH has certified the curricula written in AFAMS and circulated them for adoption nationally. A memorandum of agreement has been signed with the US Uniformed Services University of the Health Sciences to support the ongoing reconstruction of Afghan postgraduate medical education. As one of the curriculum writers said upon completing his work, “Now Afghanistan has the finest residency training program in the world because we blended the best of the older French and Russian programs with the best of modern American and Canadian curricula.”