Identification work after the tsunami 2

Forensic dentistry – yet another task for the Medical Services

Teeth play an essential role in various forensic sub-categories due to their distinct character as identity evidence and indicators for age estimation and sex determination. The most important application is the role played in the identification of victims in the wake of natural disasters, terrorist attacks or other accidents. Thus, it is part of a multi-disciplinary complex of identification methods.
In addition to direct visual identification, dactyloscopy (identification through fingerprints) and comparative DNA analysis of the findings of forensic dentistry are one of the fastest and safest methods for the identification of unknown persons. 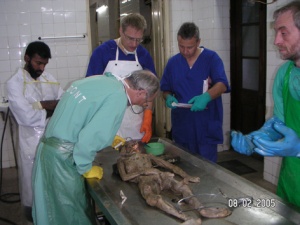 Identification work after the tsunami 1

Basis for positive identification from the perspective of forensic dentistry is the individuality of the dentition. This is based on a number of comparison points of the 20 or 32 teeth, each of which in turn exhibits five anatomical surfaces. Thus, there are 3.4 x 104 possible dental restoration combinations for a full dentition. The greater the number of quantitative and qualitative points of comparison, the more reliable the comparison. Computer models have shown that there are more than 2.5 billion variations.
The more the dental restorations (e.g. fillings, crowns, bridges) a person has, the larger the individuality of dentition and thus, the higher the probability of identifying the person from a forensic dentistry perspective.

The dental examination of the corpse comprises essentially the following steps:

•   Examination of the oral cavity

•   Recording all dental findings including all existing / missing teeth, tooth positions, extent and location of all dental restorations and utilised substances and materials, 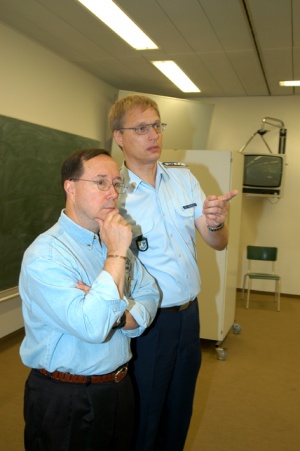 Successful comparison between the dental findings at a funeral dental findings (post-mortem findings) from the corpse with the dental treatment records of potential victims (ante-mortem findings) requires mandatorily proper documentation of initial dental findings and treatments performed during the victim’s lifetime.
This is particularly true for the field of dental care in the German Armed Forces. It is therefore a special concern of the Inspector to create the necessary basis for the dental services of the German Armed Forces and the Division VI - Dentistry, and monitor its implementation.

With the implementation of STANAG 2464, "The military dental field identification services" on 1/3/2004, a guideline document for forensic dentistry identification is available for the first time within the NATO. Even if all of the associated legal and organisational issues have not been resolved completely, a basis for personnel and material provision and management of the dental identification team was created for the field of the German Armed Forces for technical implementation of this contract and unique documentation throughout the NATO.

This cooperation also became known publicly with the establishment of the “International Symposium for Dental Identification” in 1999. In addition to dental officers of the German Armed Forces, national and international, civilian and military specialists take part regularly in this conference. Speakers include time and again employees of the Federal Criminal Police Office and Forensic Institutes from home and abroad, who not only share their experience from their daily work or personal knowledge gained from past missions, but also the latest research results of this special field.

The event at the Medical Academy of the German Armed Forces in Munich spanning for several days has three main objectives:

-    Dissemination of the necessary expertise to fulfil this task

-    Presentation of possible scenarios in terms of mission preparation and

-    Intense exchange of experience between the national and international, civilian and military experts.

This event is complemented by multi-day forensic dentistry identification courses carried out in cooperation with the Armed Forces Institute of Pathology of U.S. forces in Washington D.C.
Following the training in the technical principles of dental identification the participants could learn on the basis of a fictitious scenario – but real tooth and jaw specimens and records – to identify victims of mass disasters solely on the basis of dental evidence. 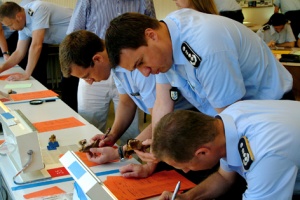 The past or present importance of proactive and skilled training of dental officers in this area became evident following the tsunami disaster in South-East Asia on 26/12/2004.
Just a couple of days after the disaster on 28/12/2004 the first dentist of the German Armed Forces, Colonel Dr. Benedix went to support the Federal Criminal Police Office in identifying especially the European victims in Sri Lanka. From mid-January 2005, the commander, Dr. Dittmer from the Aero-medical Institute of the Air Force successfully supported the Identification Commission in Thailand.

Address of the author: