On 29th February 1960, in response to the Agadir earthquake, the Bundeswehr Medical Service joined its French counterpart on a theatre of operations for the first time, assisting in the relief efforts. Since then, based on the Elysée Treaty (1963), military cooperation between Germany and France has developed significantly over the years, including in the field of medical support. This cooperation involves joint commitments such as in Djibouti and in the Sahel.

In spite of mutual medical support provided under binational agreements, there was no further cooperation relationship between the French and the German medical services until the soviet bloc collapsed. 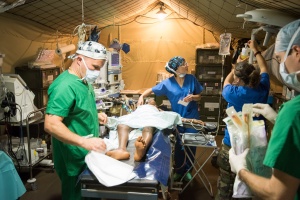 During the 1990s, the operational commitment of multinational military contingents – mostly under NATO - became widespread and led to the sharing of some aspects of medical support. In this way, within the framework of NATO Stabilization Force (SFOR) in Bosnia-Herzegovina, the Bundeswehr Medical Service fielded a ROLE 3 facility on the Rajlovac camp in 1997, for the benefit of the Multinational Division South East.

Since then, many military commitments have followed in Europe, Asia and Africa. The two medical services have built trust and mutual understanding on several occasions: Franco-German teams have equipped the coordination cell of medical evacuations in the central region of Kabul; French neurosurgeons have integrated a ROLE 3 facility in Mazâr-e-Sharif; the French ROLE 3 facility of Kabul has hosted several German surgical teams. 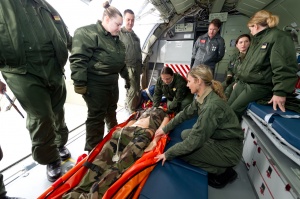 In recent years, operational medical cooperation between France and Germany has become more and more Africa-oriented. For instance, the Bundeswehr Medical Service has deployed a full surgical team at the French medical-surgical center in Djibouti for a period of 3 months every year since 2017, as part of the European Union’s Operation ATALANTA.

In central Mali, Operation BARKHANE provides level 2 care for the German contingent committed through Operation MINUSMA. In the Bamako region, the EUTM MALI French soldiers benefit from the German ROLE 2 facility deployed in Koulikoro. Besides, the German Air Force owns two aircraft for tactical airlift (C160) in Niger that provide tactical air medical evacuations upon request, for the benefit of the French contingent committed through Operation BARKHANE.