Challenges for Medical Support in National and Collective Defence

At the 2014 Wales Summit, the heads of state and government of the member states of NATO agreed to the development of the Framework Nation Concept (FNC). For the European NATO states, the nucleus of the concept is the structured development of military capabilities in multinational clusters and the buildup of larger formations. These capabilities are to be maintained and enhanced through continual cooperation, thus strengthening the defence capability of the Alliance and improving burden-sharing on a transatlantic basis.

The Joint Medical Service of the German Bundeswehr is responsible for coordination in the Medical Cluster. In 2017, seven nations of this FNC cluster decided to develop the Multinational Medical Coordination Centre (MMCC). In 2019, this initiative was merged with a PESCO project of the European Union, the European Medical Command (EMC), into one entity, the MMCC/EMC in Koblenz. A priority of the FNC Medical Cluster is the development of concepts for the multinational medical support of larger multinational formations (division level or higher).

With 60 participants from 10 nations the MMCC/EMC conducted a multinational wargame from 27 January to 7 February 2020 to test the medical support of a larger multinational formation, in this case 1st Armoured Division, in the framework of a NATO Article V major joint operation (MJO). The medical wargame CAMO was developed based on the tactical data of a previous exercise of 1st Armoured Division which was integrated into the SKOLKAN 1 scenario of NATO.

The exercise planning process made use of lessons learned in previous support services provided by the MMCC/EMC for larger formations since the end of 2018. The exercise was complex, however, because it was the first tabletop exercise to focus on this subject. The following objectives were determined in close cooperation with the PTA: 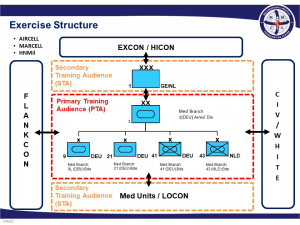 1. training and developing medical support for larger formations in an Article V MJO

2. generating common standards and best practices for medical C4I and common patient flow management within a joint operations area (JOA) for larger formations with a view to training decision-making processes and the exchange of information at all levels

3. promoting cooperation between the partner nations and the MMCC/EMC.

A suitable and realistic basic exercise structure was then developed on the basis of these objectives. The focus for participants was the management of medical challenges through command decisions in an operation at division/brigade level. In addition, tactical and operational requirements were established, the exercise scenario was laid down, and basic information for the exercise was specified, including the speeds of vehicles and the capacities of medical treatment facilities (MTF). In terms of planning, this phase was the most comprehensive as a number of details had to be considered.

The first of the two exercise weeks was used to test the scenario of the tabletop exercise, to prepare exercise control (EXCON) personnel, and to provide participants with instructions on the exercise such as tactical and operational requirements and the exercise scenario, which is influenced and controlled by facilitators (FAC).

Twenty participants from five countries were allocated to the echelons brigade, division and corps. It was important that the exercise participants as well as all EXCON personnel were able to ensure the synchronised execution of the exercise. For this purpose, information for the cells to be trained was adapted according to echelon so that the medical challenges could be coordinated with the operational processes of 1st Armoured Division. Everything was then tested in a dry run in order to iron out any remaining problems. 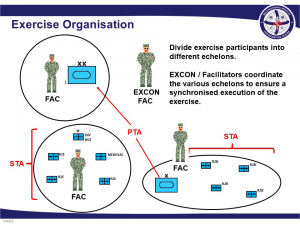 At the beginning of the second exercise week, the command cells and echelons were harmonised in order to ensure a coherent exercise organisation. Personnel from the Bundeswehr Command and Staff College and the Bundeswehr Joint Medical Service, medical personnel from the Netherlands, Belgium and the Baltic states, and soldiers from agencies of the NATO Command Structure and the NATO Force Structure and NATO MILMEDCOE took part in the exercise as observers for the purpose of disseminating lessons learned. Their evaluations provided far-reaching synergy effects for all exercise participants.

Day two of the exercise began with the defensive tactical activity “delay”. Every day commenced with a morning briefing (including the medical mission briefing) which provided participants with information about the operation and the medical situation. As the operation was already underway, participants had to evaluate information, implement the requirements and intent of the commander, and make and carry out their own medical decisions from the very beginning. During the course of the week, the tactical activity changed to “defensive” and finally resulted in a counter attack, which presented new challenges and required modified courses of action. Situations quickly arose which participants were able to master by way of clear decisions, transfers of responsibility, efficient communication, the determination of information needs by medical reporting, and the establishment of a robust and resilient medical command organisation. The exercise days concluded with an after-action review (AAR) in order to record lessons learned for the subsequent exercise evaluation. The AAR revealed the enormous innovation and development potential of training content and the high relevance for medical command personnel.
The final exercise day was used to examine all the lessons learned on previous days and to review the exercise week in order to verify these lessons. 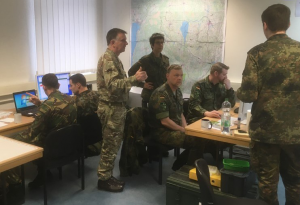 CAMO 20 proved to be a suitable instrument for achieving the above exercise and training objectives. The lessons identified will be summarised in a final exercise report. These must then be thematically incorporated into the areas of concepts, personnel, command, training/exercises, materiel/logistics and interoperability. The most important lesson learned was that, for the medical support of an MJO with expected loss rates, a decentralised system of patient flow management had advantages over a centralised system. This decentralised system is based primarily on capabilities of the MedTF which are, however, not yet represented in NATO capability codes / capability standards. It is also important to check the reporting formats of all echelons in terms of their efficiency and absolutely necessary content and to adapt them to existing regulations and best practices. The planning of medical support is an integral part of operational planning and is particularly important; the factors forces, space and time in connection with estimates of loss rates, which are specified by G3 in cooperation with G2/G1 and G5, determine medical priorities. Mobility, the rapid and flexible employment of all MTFs, and patient flow management adapted to the conduct of the operation (e.g. skipping treatment levels) must ensure medical support within clinical time limits. Under the conditions of an Article V mission with high levels of casualties, the Role 1 MTF plays an important part in medical regulating. Not all wounded/ill must first be stabilised in the Role 2 MTF of a brigade for further transport out of the JOA. For this purpose, hubs must be established at the division/corps level which re-examine patients and prepare and stabilise them for further transport out of the JOA via strategic aeromedical evacuation. It must be examined whether this capability can be ensured by capabilities of the available NATO capability codes / capability standards.

The lessons learned in CAMO 20 will be studied in depth in an upcoming workshop. The following areas will be examined:

2. Meeting the challenges of multinational command, control, communication and information in a dynamic operation