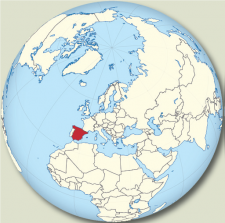 Basic Task of the Medical Service
Support, protect and maintain the health of the Spanish Armed Forces personnel.