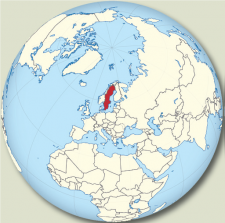 The Armed Forces consists of Army, Home Guard, Navy and Air Force. On a day-to-day basis approximately 22000 people work for the Armed Forces, divided into continuously serving full-time personnel, NCO’s and civilian employees.The Armed Forces provides Occupational Health Services for its employees nationally, as well as Primary Health Care for conscripts and Officer Cadets. There are no user fees. Civilian Regional Councils provide all other kinds of health care. These services are tax funded. There are user fees.

The Kingdom of Sweden is situated between Norway and Finland in Scandinavia. It has an area of 447.435 km2 and a population of 10.327.590. The official language is Swedish. The capital is Stockholm, on Sweden’s east coast, where the main government offices are located. (i)

The Swedish Armed Forces are under the Swedish Parliament and government. The Armed Forces are led by the Supreme Commander who supervises the Armed Forces headquarters. The Armed Forces headquarters is led by the Deputy Commander who is also the Director General. The Armed Forces comprises units of the 3 service branches, Army, Navy and Air Force, and includes the Home Guard and the national security services. All three service branches share pooled capabilities such as training, logistics, command and control, and intelligence. The Armed Forces have personnel of around 22.000, most of which are contracted part-time civilians. The mission of the Swedish Armed Forces is to ‘defend Sweden and the country's interests, our freedom and the right to live the way of our choice’. The key elements are deterrence, availability to enable an effective and rapid response to attack, co-operation with others nationally and internationally, and credibility based on a doctrine of ‘Total Defence’. (ii)

The Military Medical Services are organised as a joint service under the Armed Forces Headquarters. The Military Medical Service aims to ‘protect, maintain, and restore the health of Swedish soldiers’, and is responsible for the health and medical care of the Armed Forces. The guiding light for the Armed Forces' health and medical care is the respect for human dignity and the view of each individual as irreplaceable. This applies to all soldiers both domestically and internationally. iiiIt provides emergency care, under which field hospitals and ambulances belong, as well as having a preventative approach to the heightened risk of mental and physical distress from military service. This preventative approach is practised through education programmes, monitoring, and support, available both during peace time training and war operations. These services are provided by healthcare personnel within the Armed Forces. (iv)

The Swedish national health system, under the Ministry of Health and Social Affairs, is a tax-funded system that covers all citizens. It is considered to be a high-performing health system having highquality hospitals.vResponsibility for the healthcare system lies within regional councils rather than the national government under the Health and Medical Service Act; however, the central government sets the values and rules to uphold the political agenda set for the health and medical care. In 2019, the health and medical care costs represented 11 per cent of the Gross Domestic Product. Medical care is funded through regional and municipal taxes, with small government contributions and patient fees. (v)

The Armed Forces provides Occupational Health Services for its employees nationally, as well as Primary Health Care for conscripts and Officer Cadets. There are no user fees. Civilian Regional Councils provide all other kinds of health care. These services are tax funded and there are user fees. 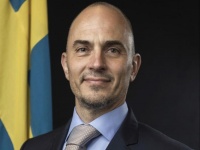 The Surgeon General leads and coordinates the MHS, supported by a Chief Medical Officer.

The Surgeon General and Director General of Medical Services is Colonel Claes Ivgren. (vii) The Swedish military health services run the following education and research institutes: the Centre for Defence Medicine (in Gothenburg), where qualified medical personnel are trained; aviation medicine training (in Linköping); and the Centre for Diving Medicine (in Karlskrona). The Logistics Regiment (in Skövde) is a joint armed forces unit that provides logistic support (including medical support) to other units. viiiThe Defence Inspectorate for Health and the Environment has a duty to monitor obligations over areas to do with health and environment within the Armed Forces. It is under the Armed Forces Headquarters but reports directly to the government, however, in matters concerning non-supervision or control matters they report to the Commander-in-Chief. (i)

The Swedish Armed Forces operate primary care regional medical facilities that have a small fulltime medical personnel staff; the rest of the staff are employed on a part-time basis. Hospital care for armed forces personnel is organized by the civilian health care system in collaboration with, for example, university clinics, academics and research institutions. (x) The Armed Forces provides Occupational Health Services for its employees nationally, as well as Primary Health Care for conscripts and Officer Cadets. There are no user fees. Civilian Regional Councils provide all other kinds of health care. These services are tax funded and there are user fees.

The military health system has limited responsibilities towards families during deployment and towards veterans the first five years after deployment.

Table 3.1 Beneficiaries of the Firm Base Military Health System

There is extensive research going on at the diving and naval medical centre in Karlskrona. This research is to verify a new diving device (decompression table) that they intend to put into purpose in 2022. This device regulates how long a diver can stay underwater for and how deep they can go, which would minimise risk of death. This research is important as previous research has been taken from the United States in a different atmosphere. As the Swedish water temperature is a lot cooler, it is important that they have different tools. Research is done in cooperation with Naval Academy, 3 Blekeinge Institute of Technology, the Coast Guard, Lund University and FM DNC. In this research divers’ medical measurements and checked frequently. (xv)

Are there civilian institutions and researchers who are funded by the military to conduct military medical research?

Sweden’s main international deployment has since 2015 been to the United Nations Multidimensional Integrated Stabilisation Mission in Mali (MINUSMA). The troops have had Role 1+ capability.

The primary operational medical unit is the Försvarsmedicincentrum (FömedC, Center for Defence Medicine). The unit motto is "Vita praeponitur" meaning ‘life first’. The unit's overall goal is to ensure well-functioning health care within the Armed Forces in peacetime, in international operations, in the event of a crisis and disaster, and during an armed conflict. This means everything from health care for employees in peacetime to emergency medical care of gunshot wounds during combat. It is the Armed Forces functional centre for defence medicine, including: defence medical research and capability development; strategic personnel supply, recruitment, staffing and education and training of the Armed Forces' licensed health and medical personnel; the development of and supply of medical equipment and medicines. The unit sets requirements, monitors and evaluates the medical disciplines of the defence disciplines and brings together and focuses medical operations management, intelligence services and training in defence medicine. The FömedC provides the Armed Forces with qualified employees in health and medical care who are well equipped, trained and prepared to carry out their tasks. Part of the FömedC is located in Linköping. Personnel consist of both full-time and part-time officers, civilian specialists (such as doctors and nurses), group officers, soldiers and reserve officers.

THE FIRST AND SECOND HOSPITAL COMPANIES

The Swedish Military health system is aligned with NATO standards. The first and second hospital companies are located at FömedC. The companies have officers, soldiers and civilian employees. The majority are health care staff and there are categories that work full-time, part-time or are on-duty staff.

Sweden’s main international deployment has since 2015 been to the United Nations Multidimensional Integrated Stabilisation Mission in Mali (MINUSMA). This has included Role 1+ capability.

Sweden is a part of the United Nations, European Union, and cooperates with the North Atlantic Treaty Organisation. It is a member of the Nordic defence cooperation and specifically partners with Finland, and cooperates in programmes, councils, forums, and missions hosted by the above. xxiIt is a partner country to the NATO Chiefs of Military Medical Services Committee (COMEDS). Sweden has participated in crisis management exercises and provided the Euro-Atlantic Disaster Response Coordination Centre with services including medical experts, protection, and decontamination units through civil resources. Sweden also provides for example, medical rehabilitation of injured military personnel services to various NATO partner countries under Trust Fund projects. (xxi)

Is there any military collaboration with the EU?

The Swedish concept of ‘Total Defence’ includes all societal activities including the Riksdag (the Swedish parliament), the Government, government agencies, municipalities, private enterprises, voluntary defence organisations as well as individuals. This also applies to the healthcare systemxxii i . In 2020, the Ministry of Social Affairs published proposals for direction for civil-military cooperation health and medical care as part of Total Defence xxi v .

xxi i Relations with Sweden, NATO