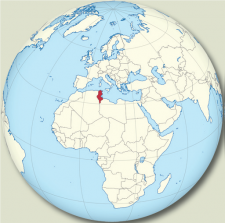 Basic Task of the Military Medical Service
The Military Health Service is responsible for:
• assuring the medical welfare of operational forces,
• providing medical care services to military and civilian personnel of the Ministry of National Defence and to their dependants,
• participating as the main partner in the implementation of the national disaster relief plan.

It contributes to the national effort to develop the Tunisian health system:
• by participating in the teaching of medical and paramedical officers in the medical faculties and their schools and in training in university health departments (supervision; continuous medical training, medical research),
• by developing certain fields of activity such as aeronautical medicine, underwater and hyperbaric medicine, emergency and catastrophe medicine ...,
• by dispensing preventative and curative medical care free of charge to conscripted soldiers during their national service and to the civilian population of certain remote zones of the country, in particular the Saharan territories,
• and by being generous with the curative medical care to the general population in accordance with agreements made principally with the national health insurance service (CNAM).
The medical service to the armed forces is both preventative and curative and includes treatment. This aim constitutes an unwavering rule both in times of peace and in emergency situations.
Certain actions, such as medical evacuations by helicopter to assist severely injured victims of traffic accidents and in particular Tunisian tourists and foreigners in the Saharan territories, are conducted concomitant with the public health services in the context of support to the national effort.

Structure
From the functional point of view, the Tunisian Health Service is a joint forces service and its Director-General is directly answerable to the Minister of Defence.
This service is structured into a central design agency represented by the Directorate General of the Military Health Service (DGS) and the operational establishments comprising the medical units, the specialised centres and the training schools.

The Central Directorate
The DGS is responsible for the design of programmes in the different fields of military medicine, for the supervision of their implementation and for evaluating them.

The Directorate is composed of:
• a medical supply and support directorate,
• a scientific, technical and training activities directorate,
• a control and evaluation division,
• an administrative and financial division.

The first directorate, supply and support, facilitate the collection, treatment and analysis of medical information, the support of forces in the field and in catastrophes and planning for better management of hospitals.
The second directorate deals with questions of hygiene and prevention of disease in the army as well as medical checks and fitness for selection. It coordinates the various units and research laboratories, which form part of the military hospital structure. It also designs the programmes and training courses for the medical, paramedical and auxiliary officers in the armed forces health service practice school (EASSA) and in the School of Military Health (ESM) and decides on priorities for training overseas.

The executive management of the military healthcare system comprises:

1 - The administrative and financial division

2 - The health inspection and assessment division

5 - While awaiting the latest reorganisation of the executive management of the military healthcare system, the minister for national defence has agreed to add:

6 - The following medical structures are subject to the supervision of the executive management of the military healthcare system: 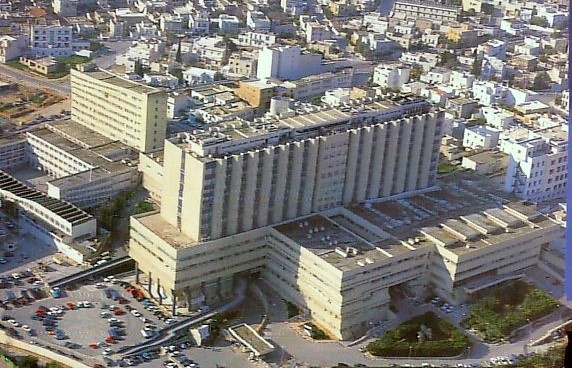 The Principal Military Hospital of Instruction of Tunis (HMPIT)
The HMPIT is a Role 4 university hospital with 620 beds, comprising practically all medico chirurgical specialities. It is responsible for training and research and possesses a leading-edge technical support centre including a 64 Slice CT scanner, 3-tesla MRI, coronary scanner, arterial scanner, PET scanner, neuronavigation.
The HMPIT organ transplant team conducted the first cardiac transplant in Tunisia in 1993, the first graft of both kidney and pancreas in Africa in 1993 and created its tissue bank in 2002.

The Military Hospital in Remada

Located in the extreme south of the country in a Saharan environment. It's a Role 2 modular hospital. It is designed to support deployed military personal and also the civilian population of the region. It contains more than 8 specialities including surgery and intensive care. The medical and paramedical staff of around 40 people take turns monthly and dispose of a technical platform with laboratory, radiology, pharmacy...

The Centre for expertise for Aeronautical Medicine (CEMEDA)
The CEMEDA provides medical selection and periodic checkups for military aircrew and for technical airline aircrew and civilian air traffic controllers. It also vets certain categories of personnel who are subject to specific fitness standards such as divers, Special Forces personnel and combat swimmers and also vets troops called up to serve in overseas operations.
The centre deals with the physiological training of pilots especially in the areas of hypoxia, variations in pressure and sensory illusions.

The military centre specialising in dental medicine in Tunis

The Military Centre for hygiene and environmental protection

It is a specialized centre for military health. It started its activities gradually in 2012 to conduct:

The Military Centre of Hygiene and Environmental Protection performs epidemiological investigations in the military in the event of the appearance of transmitted disease. It collaborated with the authorities of the Ministry of Health for the welfare and protection of the citizen.

The Military Centre for occupational medicine and workplace safety:

It was created in 2013. Its purpose is to prevent professional risk, ensure the health and safety at work and the whole staff of the armed forces. It is responsible for studying specific professional hazards in the military environment and the implementation of technical and medical preventive measures.

The achievements of this centre consist in elaboration and implementation of a program to prevent a toxic risk in the army, the progressive establishment of periodic medical examinations to the military and assistance for some training in the management of professional risk.

It was created in 2013. Its mission is to respond in collaboration with medical facilities exclusively to non-hospital emergency situations of individuals or collectively.

Training
The Armed Forces Health Service Practice School
The Armed Forces Health Service Practice School (EASSA) provides the specific post-doctoral and joint forces military theoretical and practical medical training of doctors, pharmacists, dentists and veterinary surgeons. It prepares this personnel for their future roles in the armed forces. It also trains specialised nurses.
Many international scientific events are regularly organized by EASSA under the aegis of the International Committee of Military Medicine (ICMM) such as the ICMM Course for Health Support in Saharan Environment. This course becomes an annual meeting for medical officers coming from different countries and the sixth session will be held in Tunis and Tozeur on November 8-14, 2015. As others, ICMM course can be cited Tunis Low of Armed Conflict and Medical Ethics Course which is organized for the third time during October 2014 in collaboration with ICMM Centre of reference for education on international humanitarian law and ethics (Swiss Armed Forces) and the support of International Committee of Red Cross (ICRC). Can also be mentioned the Military Health Course on Methodology and Medical Writing and its third session will be held during the period of March 30 to April 3, 2015.

The School of Military Health
The School of Military Health (ESM), trains military nurses (three years of study). In addition to the national nurse training programme, the students benefit from a military training as non-commissioned officers, as well as a military medical training enabling them to carry out their role in hospitals and specialized centres, or in various units of the Army, Navy or Air Force.

Field Deployments
The operational aspect of military medicine is provided by field hospitals, either in their traditional or modular form or in the form of mobile medical units (shelters). The Tunisian Army has modular mobile medical units (resuscitation, surgery, laboratory) constructed by Tunisian capabilities.

Large experience in conducting overseas missions and peace-keeping operations under the aegis of the United Nations Organisation (Somalia 1992-94, Cambodia 1992-1993, Rwanda 1993-94, Congo Democratic Republic 1960 & 2000-2010) or the African Union (Burundi 1994) or else in purely humanitarian missions undertaken for the relief of victims of natural disasters like the missions undertaken in Algeria after the earthquakes of 1980 and 2003, or to the displaced populations and refugees in Lebanon in 1982 and in Albania in 1999. 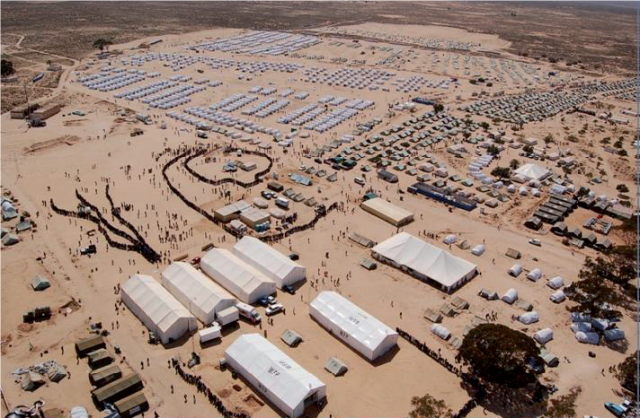 Despite this experience in carrying out humanitarian missions abroad, Tunisian Armed Forces faced for the first time, since 1958, a complex emergency situation on the homeland in February 2011. Libyan crisis started a few days after the Jasmin revolution.
The Armed Forces have been assigned some new missions other than the preservation of order and the border’s control.
These new missions comprised the administration of refugee camps, the coordination of international humanitarian effort and a contribution in providing health support to the refugees. Tunisian Military health service (TMHS) had to cope with these new challenges; not only to support the deployed soldiers but also to provide health care to Tunisian migrant workers and to the refugees fleeing the on-going violence in Libya.
Some difficulties were faced and most of them in connection with Saharan environment specificities, refugee cultural and religious diversity and camp status.

Civil-Military Cooperation
Medical evacuations by helicopter to assist severely injured victims of traffic accidents and in particular Tunisian tourists and foreigners in the Saharan territories are conducted concomitant with the public health services in the context of support to the national effort.