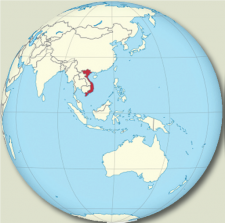 Vietnam Military Medical Corps has the following tasks:
• Building up the revolutionary, regular modern Military Medicine; Supporting the Vietnam People Army to carry out successfully all tasks in any condition; Joining the healthcare system to take care of the health of Vietnamese people;
• Implementing medical measures to take care of military personnel; Timely and well cure wounded and ill soldiers, in order to restore the fighting and working ability for wounded and ill soldiers;
• To organize the medical supplies for taking care of military personnel and curing of wounded and ill soldiers;
• Preventive medicine;
• Military medical training and research. 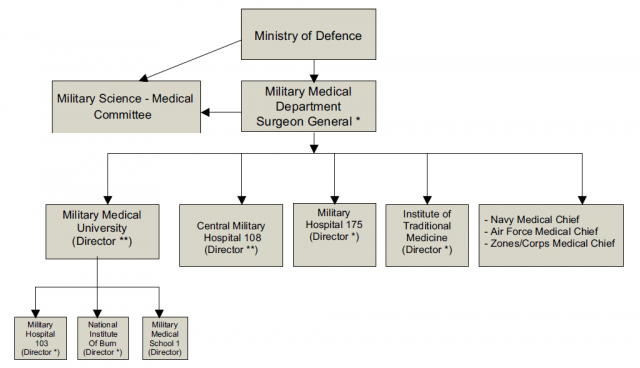 Presently, Vietnam divides into military zones in which there are one to two Military Hospitals, some local hospitals with 12.000 beds, among them, one is a special class hospital, one of the four nationwide. The National Institute of Burns, managed by the military, is a final care hospital for burn treatment nationwide, the main force in tackling explosion accidents causing great burns. In addition, to provide health care for soldiers and people, the Vietnam Military Medical Corps has pioneering development in some areas of modern medical science at the national level such as organs transplant, the first cases of viscera transplants in Vietnam have been conducted in the military hospital such as kidney transplant in 1992, liver transplant in 2003 and heart transplant in 2010. 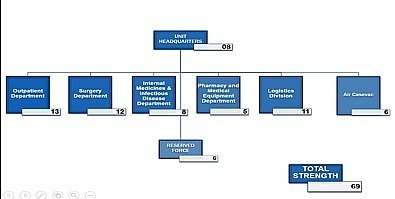 Civil-Military Cooperation
Recognizing the role and capability of the military medicine, the government of Vietnam has outlined the Joint Military-Civilian Program (coordinated operations between the Ministry of Health and Ministry of National Defence) in protection and care for people’s health. In some periods, Director General of the Military Medicine Department also serves as Deputy Minister of Health; senior military medicine officers were seconded to the Ministry of Health. In line with the program, military medicine units have actively examined, treated and provided first aid for people. According to general estimation, non-military people go to military medicine units accounting for over 60% of the patients. Annually, military doctors in hospitals and clinics of the Armed Forces have examined more than 3 million people, over 1 million treated in bed, 100.000 received first aid, and 200.000 got surgery.

The Vietnam Military Medical Corps has actively taken part in the consolidation of the local medical system, 10 years recently, 400 civilian-military medical clinics have been fully consolidated, more than 800 others have been consolidated in accordance to their working missions. The total of village medical clinics, through the Joint Civilian-Military program that the armed forces already have realized representing 10% that of nation wide's, of that total, over 70% have been conducted in the remote, border and offshore areas.

Vietnam Military Medical Corps actively engaged in pandemic prevention. In 2003, regarding SARS pandemic, Military Medical Corps has timely detected and separated, pasteurized, sterilized epidemic pesthole avoiding from an outbreak and successfully contained it and received high appreciation from the World Health Organization. In 2009, H1N1 influenza pandemic appeared and quickly out broke, complicated, and affected many countries, including Vietnam, comprehensive measures against the pandemic had been taken thus influenza timely contained. Presently, we have built a model of 7 field hospitals ready to be deployed in an accidental situation.

Besides engaging actively and effectively in protecting and caring for people’s health, making an important contribution to realizing social-economic targets, we also take part in tackling environmental issues and humanitarian assistance:

• Our Armed Forces are actively involved in voluntary blood donation and blood usage. Military hospitals, each year, receive from different sources of about 10.000 litres of blood, of 85% voluntarily contributed by soldiers. The blood, that was received, has been used for a patient who is civilian representing over 90%.

In disaster relief, military medicine is a core force for the participation of the Armed Forces. The mission for medical insurance in emergencies receives due attention from government, ministries and other sectors. The Vietnam Government has established a system of management for medical insurance in emergencies. Standing Committee of the National Committee for Search and Rescue is stationed at the Ministry of National Defence. Disaster relief response coordination carried out under the regulations of the government, implemented by the Armed Forces coordinating with relevant offices. An emergency occurs, the Defence Ministry will deploy force, equipment, and military medicine to conduct rescues.