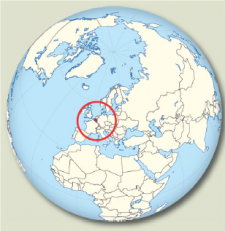 Almost directly after the foundation of Belgium in 1830, a medical service was established. The need however was questioned severely during the first decades. It would cost Belgium more and it was considered as useless since all military units could perfectly use the existing medical (civilian) facilities. In case of a war the medical service was only in charge of evacuating victims from the battle field. The treatment was done by the Red Cross. Only after the First World War, the importance of a robust medical service became clear.

During the cold war, a structure of reserve hospitals, trains and other evacuation means was set up.

After the cold war, the medical service started to evolve to the structure which is nowadays still in place. Besides the political and international environment, restructurations and budget cuts had a strong influence on the further development. Several military hospitals were dismantled (the military hospital Queen Astrid is the only remaining military hospital).

Belgium is located in the West Europe with around 30 000 square kilometres the country and 11,5 million inhabitants. His neighbour countries are France, The Netherlands, Luxembourg and Germany.

The official languages are Dutch, French and German.

The Kingdom of Belgium is a constitutional monarchy and a federal state made up of three Communities (the Flemish Community, the French Community and the German Community) and three regions. All these entities have their own legislative and executive bodies.

This small country has the opportunity to host the European Union (EU), the North Atlantic Treaty Organisation (NATO) and many other international institutions.

Organization of the Ministry of Defence and Armed Forces

Within Defence there are 05 components: Land, Navy, Air, Medical and Cyber.

Organization of the medical Forces

The Military medical capabilities of the Medical Component are organized in three pillars:

Missions of the Medical Component

The main mission of the Belgian Medical Component is to ensure the provision of medical support during operations (National, NATO, EU or UN).

The third mission of the Medical Component is the training of its own medical modules.

And finally, the Medical Component is responsible to provide medical-technical education. 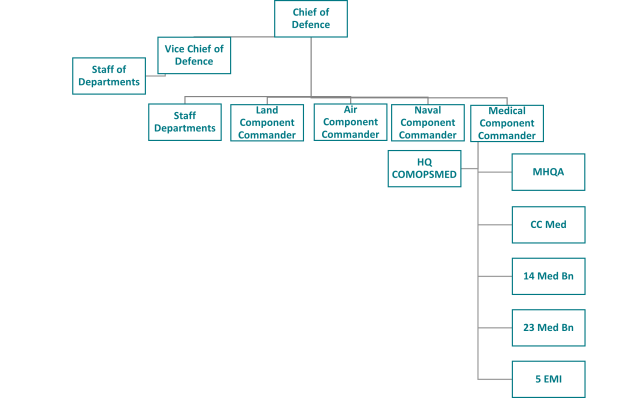 The Belgian Medical Component is similar to the Land, Air and Naval Components and falls under the command of the Chief of Defence.

The Medical Component has five units each with a specific mission in accordance with the operational ambition.

14 Med Bn and 23 Med Bn, are two medical operational battalions with subunits geographically spread across the country as close as possible to the units they support. These units consist of all the personnel and material resources required for the deployment of a Role 1 or a Role 2 MTF in direct support of their client’s missions and activities except for the specialized medical care providers who are employed within the Military Hospital. Each medical company in this battalion is mainly oriented towards particular needs and/or assets of medical support, such as aeromedical evacuation, medical support to the motorized brigade, to the special operations regiment, the naval component etc.

5 EMI has been assigned the responsibility of the production, storage and distribution of medical equipment and supplies.

The Military Hospital Queen Astrid (MHQA, Role 4) on the other hand, provides a limited lying-in facility as well as an outpatient clinic for certain medical specialities medical imaging and laboratory services. It contributes to the regional emergency and disaster medical services system. The Military Hospital Queen Astrid also hosts certain medical niche capabilities including a burn Centre, a centre for hyperbaric oxygen therapy, a physiotherapy and rehabilitation unit, a centre for mental health care, the military centre for aviation medicine, the centre for medical fitness assessment etc. (see the section ‘Military Hospital’).

The Component has also a Medical Competence Centre (CC Med) for teaching both medical and combatant (non-medical) personnel, with the exception of the graduate and postgraduate education of all medical professionals (physicians, physiotherapists, veterinarians, nurses etc.) which takes place in civilian universities and medical schools. The Centre is collocated with the Military Hospital.

Finally, the Operational Command of the Medical Component (COMOPSMED) is located in the Queen Elisabeth Barracks near Brussels as part of the Belgian Defence Headquarters COMOPSMED is responsible for the organization and implementation of the military garrison and operational health care portfolio to the beneficiary Defence personnel. In addition to that this medical staff is responsible for the readiness of the medical capabilities.

The mission of the Military Hospital Queen Astrid is threefold:

One of the main service objectives to achieve this mission is providing specialist medical care tailored to military duty. The Military Hospital is not a distinct hospital in the traditional sense but manages a number of specialized health care services in specific domains of military interest. That is why its activities are primarily focused on pre-hospital emergency care and disaster medicine (including CBRNe emergency ambulance), burn care, traumatology, orthopaedic surgery and rehabilitation, travel medicine, hyperbaric medicine, mental health care and crisis psychology. These hospital facilities are merely dedicated to the treatment of beneficiary active military and civilian Defence personnel. However, the burn care centre is a national centre of excellence, the centre for hyperbaric oxygen therapy and the emergency medical services, both integrated into the Capitals emergency and disaster relief system, are open to the public through cost refund. Especially in these three fields of expertise, the Military Hospital contributes to the context of aid to the nation.

Since, as a consequence, the Military Hospital is not a genuine general hospital, multilateral collaboration with civilian partners have become of utmost importance. In this way, the Military Hospital holds several partnerships with university hospitals in the neighbourhood and even provides to one of these, a part of its infrastructure. Besides, in the specialities not available in the Military Hospital, when necessary, Defence personnel will be referred to the civilian health care services and can get their costs reimbursed.

Secondly, the Military Hospital holds an important role as a medical training facility to maintain skills and competencies tailored to military operational medicine and serves as a reach-back capability for the deployed medical forces. Moreover, the hospital is a key player when it comes to scientific research and development of innovative technology and treatment in certain niche activities that are of military concern such as infectious diseases, septic surgery, wound healing etc. The laboratory for molecular and cellular technology works closely together with several national and international (academic) partners and concentrates on the development of skin substitutes, on safety improvement of skin and keratinocyte grafts, on the molecular epidemiology of resistant microorganisms and on bacteriophage therapy. The laboratory for clinical biology, on the other hand, has been recognized as a national centre of reference for zoonotic diseases (Coxiella burnetii, Rickettsia and Anaplasma).

Last but not least, and next to the ambition directly related to operations, the Military Hospital hosts a dedicated so-called centre for medical fitness assessment, that is in charge of the medical readiness preparation of all deployable Defence personnel: from the medical selection on enlistment to periodical fit-for-duty or operational fitness screening and disability evaluation during the entire professional career. This belongs to the expertise of several medical specialists working in the outpatient clinic of the hospital (ophthalmology, ENT, cardiology etc.), including the medical imaging department, the laboratory for sports medicine or the centre for aviation medicine. Physical rehabilitation through the ‘total force fitness’-program also contributes to this service objective.

Most of all the research projects take place in the military hospital. To give some examples:

The Belgian Continuum of care starts with first response at the point of Injury (POI) within 10 minutes. Then followed by a Forward Evacuation to the first Medical Treatment Facility (MTF), which can be a Role 1 or a Role 2 Medical Treatment Facility (MTF). At the Role 1 MTF a Emergency Physician can provide Damage Control Resuscitation   (DCR) and from there the patient will be evacuated ( Tactical Evacuation) to a Role 2 MTF. Damage Control Surgery can be provided in a Role 2 Forward and a Role 2 Basic MTF and General Surgery can be provided in a Role 2 Enhanced. From there the patient will be evacuated to his homeland with a Strategic Aeromedical Evacuation. Forward and tactical medical evacuation are currently mostly done by ground assets. Fixed Wing on A400M is currently in development. Next to this the process has been started to buy new light utility helicopters to perform forward and tactical aeromedical evacuation. State-of-the-art retrieval of the sick and wounded soldiers from the operational theatre completes this process of care. To that purpose, the Belgian Medical Component operates a dedicated strategic aeromedical evacuation program in close collaboration with the European Air Transport Command (EATC). Specialized assets include certified aeromedical crews and various types of patient transport units.

According to the political guidance, the mission of the Belgian Medical Component is to participate to joint medical support in the framework of EU, NATO or UN operations by filling either advisory or international staff positions, or either delivering Role 1, Role 2B and Role 2E capabilities conform and tailored to the activities, operations and level of ambition of the other Components or independently on its own.

Moreover, the Medical Component contributes to stand-by operations such as EUBG and NRF/VJTF which has been deployed in 2022 in Romania.

Last but not least, the last decade the Belgian medical military personnel systematically participated in several homeland Ops: after the terrorist attacks of 22nd of March 2016, the security operation, during the covid pandemic, the floods in the south of the country in 2021.

The Belgian Medical Component numbers approximately 1600 service members, of which 56 are medical officers (almost 65% qualified general physicians and emergency physicians), 24 qualified physiotherapists, 05 dental officers, 11 veterinary doctors and 27 pharmacists. A forceful recruitment campaign has to result during the coming years in a significant increase in this Medical Technical Corps with about 200 employees. Besides these medical technicians, another 87 officers constitute the Medical Support Corps of the Component. Moreover, 08 occupational medicine providers and 08 medical advisors serve within the Well-being staff department of the Belgian Armed Forces Command. 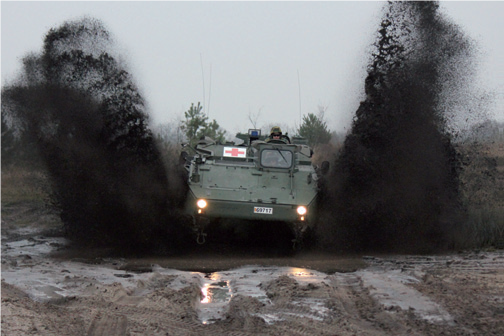 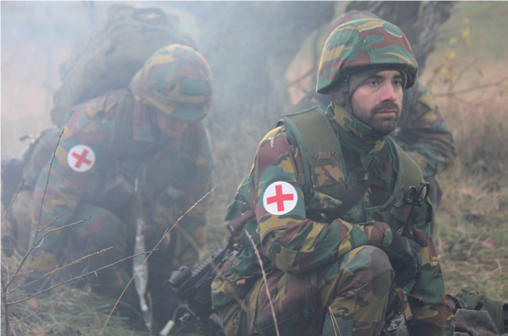 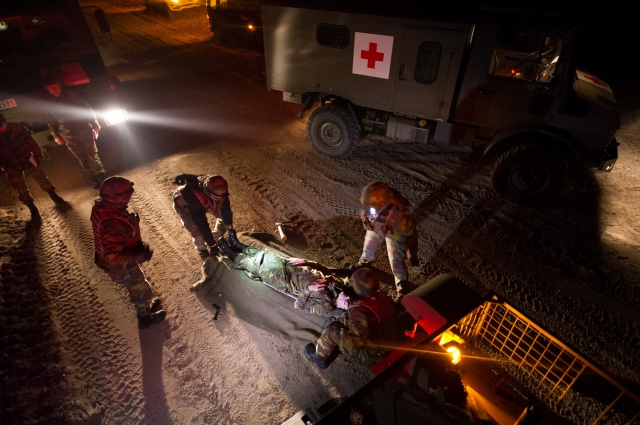 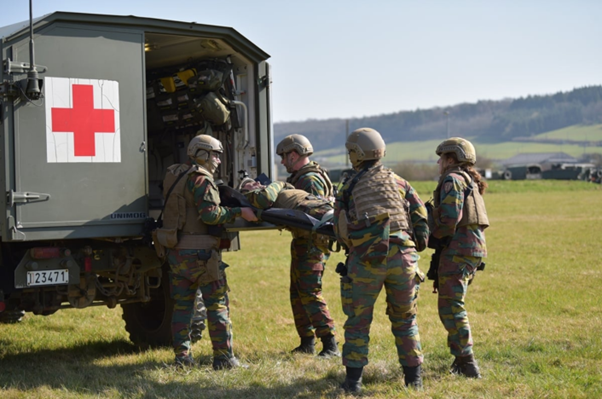 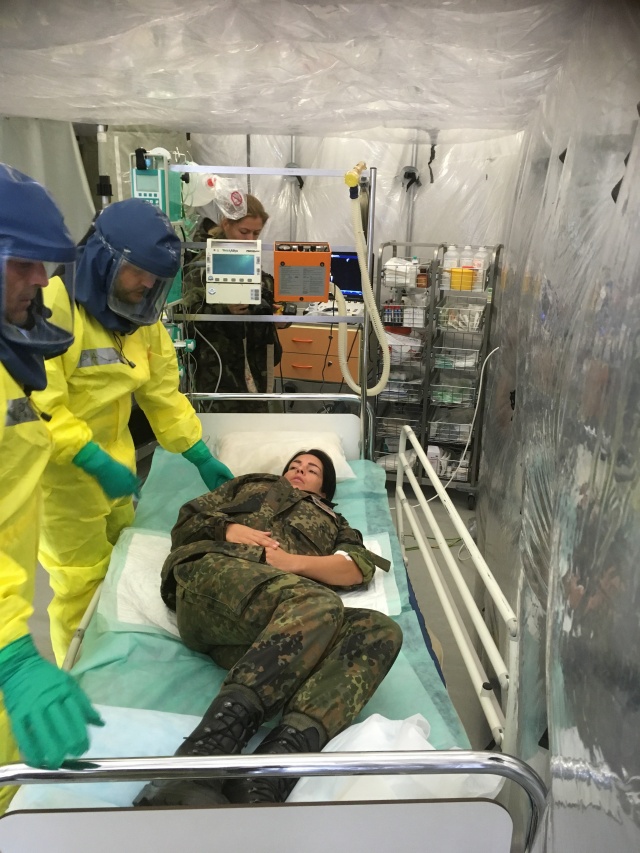 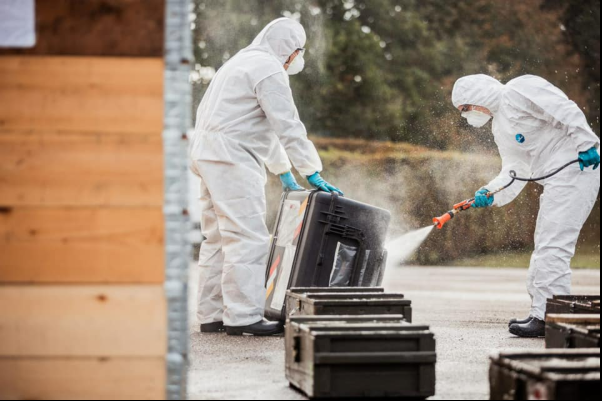 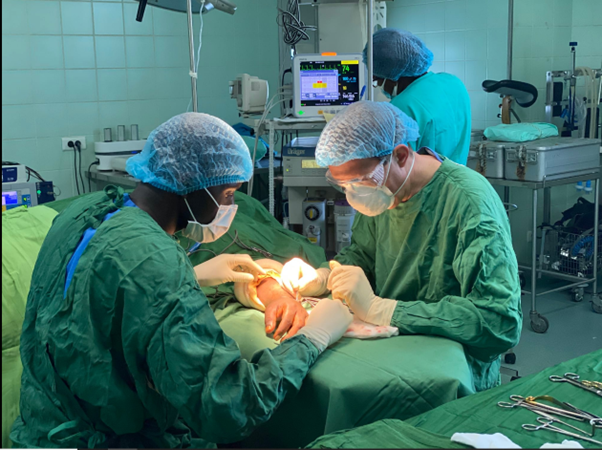 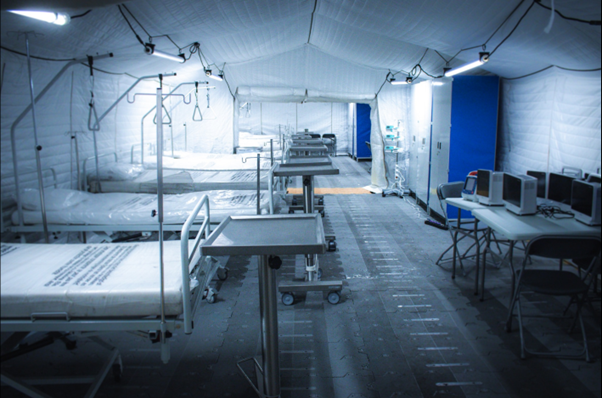