Tourniquet is in place, bleeding has stopped. The obvious “C” problem has been solved for now. So let’s start at “A”. He is breathing, albeit shallow and fast; apply oxygen mask to face, “10 litres per minute” is the instruction to the paramedic. No audible breathing on the left, the neck veins are swollen and the alarm draws the rescue team’s attention to the monitor: Heart rate 160/minute, pulses hardly detectable. Needle thoracostomy in 2nd ICR left. The patient stabilises. “Thank you!” it sounds from the loudspeaker – the simulation is now completed. 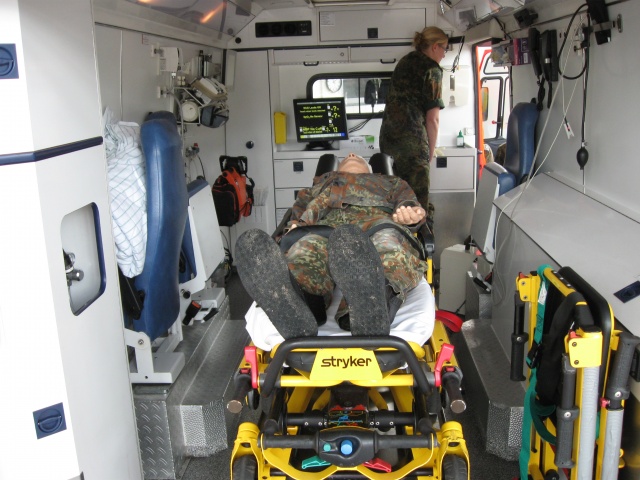 Simulation of preparatory training for deployment in the “old” NAW Introduction

The first patient simulator at the GE AF Hospital in Hamburg was installed in 2009 in an old mobile intensive care unit of the Rescue Centre (Fig. 1) and utilized within the framework of the BAT (Mobile Medical Team) deployment preparation course (see below) - in those days without the option of video debriefing. The participants who were not active watched the scene live through the open rear doors of the vehicle. Using own resources at first, we started setting up our simulation centre in the former facilities of the hospital's central sterilisation section in the summer of 2010,.

The simulation centre in its present form has two simulation work stations. A simulation work station allows simulation of internal clinical scenarios - including the trauma room, the operating theatre and the intensive care unit. Various internal clinical simulation scenarios are practiced here, similar to those implemented in simulation centres at university hospitals.  One of the special features of our military simulation centre is a patient simulator in a mock-up of the patient compartment of the armoured ambulance “Yak”, built especially for pre-clinical deployment preparation training. Three camera perspectives and sound may be recorded from each of the two simulation rooms and transmitted live to the debriefing room. The adjoining debriefing room accommodates 15 participants and is used for tuition and debriefing of the simulation scenarios. A further mobile video debriefing unit is available for mobile simulation such as in rescue vehicles or at other emergency incident locations. 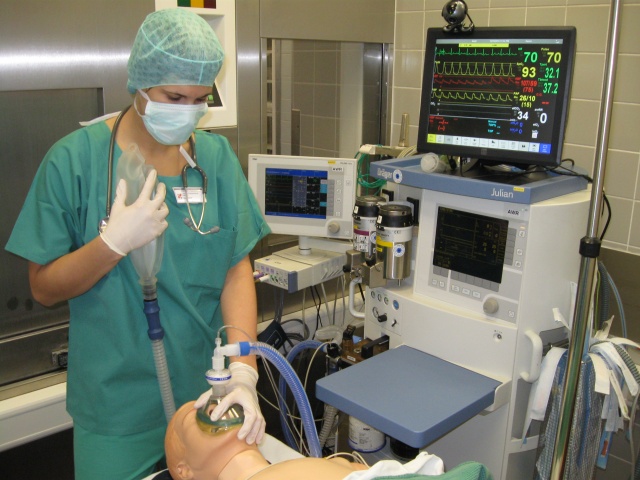 In the medical services, all personnel have gone through tuition and practice in cardiopulmonary resuscitation on a basic simulator in the first aid course. However, in medical training the options for simulation go far beyond learning and practicing basic skills such as resuscitation or airway management. The full-scale patient simulators (Laerdal SimMan) (Fig. 3) 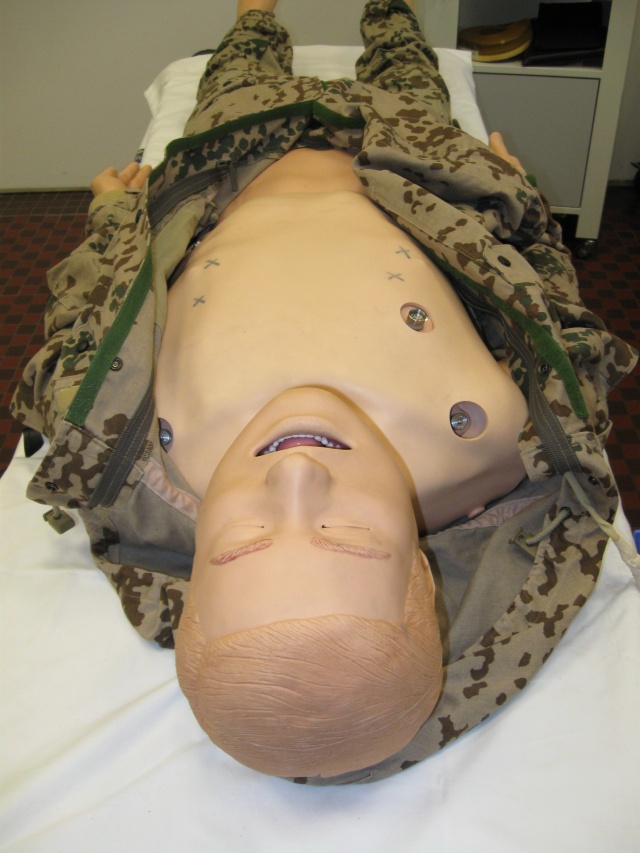 procured by the German Armed Forces feature “spontaneous breathing” with visible thorax excursion and auscultatable respiratory sounds. To capture the circulatory parameters, the pulse may be palpated at the extremities, both groins and the carotids. Blood pressure can be measured manually or fully automatic. Voice output via a speaker in the head of the simulator enables realistic communication between “patient” and treatment team. Apart from the options for airway management – both supraglottic and endotracheal – pneumothorax may be treated using needle compression or by thorax draining. Using defibrillation/cardioversion and pacemaker therapy, cardiac arrhythmia may also be treated, using the defibrillator and ECG connections. Display of the vessels in the “infusion arm” enables intravenous medication and infusion in actual volumes (2). Virtually all problems related to anaesthesia and emergency medical care can be simulated and treated. Symptoms which cannot be shown technically, e.g. pallor or sweating, are communicated to the participants by means of “stage directions” by the team of instructors.

In addition to solving simple to complex medical problems, non-technical skills are taught in the simulator through team training. These include communication, team management, situational awareness and decision-making. Approximately 70 percent of medical errors are ascribed to these human-factor related shortcomings (1). The introduction of Crisis Resource Management (CRM), as practiced in aviation, helps to reduce mistakes in medicine, thereby increasing the safety of patients. CRM improvement is the main training objective in civilian simulation centres. In our simulation centre, these training objectives are projected on a medical service environment under deployment conditions.

Debriefing – learning from your mistakes

Following a brief introduction to the situation, scenarios lasting 10 to 15 minutes are dealt with. Picture and sound are recorded throughout. Momentarily not actively involved course participants can follow proceedings on a monitor. Simulation is immediately followed by debriefing. The team of instructors asks questions about the still fresh impressions and emotions, followed by addressing the medical and CRM-specific problems. Video sequences (Fig. 4) from the simulation scenario give participants the opportunity to reflect on their responses (3). 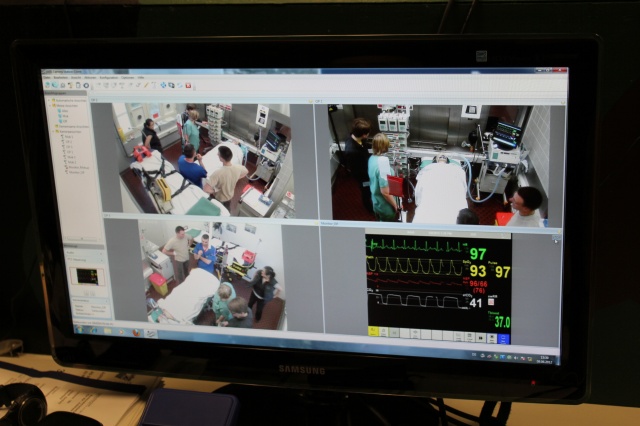 Many details in the scenario, such as monitor alarm signals or an overhead fighter jet, are consciously registered by the participants only when viewing the video. This may be addressed during debriefing and may, for instance, be dealt with more extensively in terms of situational awareness. Applicable in principle: Mistakes should be made in the scenarios, since the focus is on learning. The performance in the simulation is irrelevant.

Basic fields of application of the patient simulator

In the clinical field, simulation enables structured training of anaesthesiological incidents such as anaphylaxis, difficult airway management or handling medical device errors. Especially interdisciplinary teamwork can be promoted in trauma room training. Simulation may furthermore confront participants with patterns of injury and clinical pictures which may be rare in Germany. Experience with penetrating injuries or explosion traumas, which we cannot offer our participants even in weeks of practical courses at our rescue facilities in Hamburg, may become very relevant during deployment (Fig. Pillars). Deployment-specific stress factors may be introduced to intensify the situation, e.g. radio communication, battle sounds and strict time limits.

The format of the first course presented in the simulation centre was a 3-week BAT course including skill and subsequent simulation training. The objective of this concise course is to impart essential deployment-related know-how and skills to the often young colleagues, generally prior to their first deployment as emergency physicians.

After learning individual skills for emergency treatment such as intraosseous infusion, emergency coniotomy and thorax drainage on the specific training devices and on corpses, the participants are confronted with mock-up scenario simulations which may occur during assignment as a BAT emergency physician. The spectrum ranges from basic extremity trauma and poly-trauma to secondary transport to a higher level of care. Apart from the treatment of patients, the scenario may also be complicated by combat noise and tactical priorities. Up to now, 15 courses, each with four participants, have been completed successfully.

The medical emergency as such already poses a special challenge to the treatment team. What are the implications if such an emergency has to be dealt with in a foreign language or if tactical conditions must take precedence over medical care? What is the structure of my partner nations’ military hierarchy?

These are the issues addressed by the pilot course conducted by the NATO Centre of Excellence for Military Medicine (Budapest, Hungary) together with the GE AF Hospital, Hamburg, in January of this year. As a rule, a multinational rescue chain gives medical care in the context of our current foreign deployments. The course focuses on optimising these interfaces to improve patient care.

Half of the one-week course was spent in the simulation centre. Participants from three nations mastered pre-clinical and trauma room scenarios which were discussed afterwards by way of video debriefing. (Fig. 6) 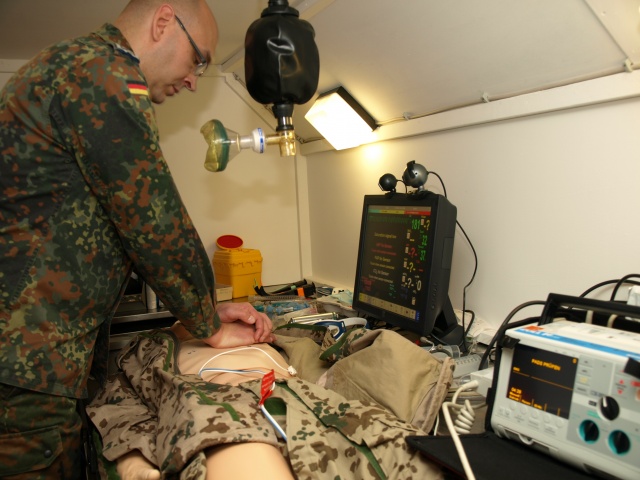 Our simulation scenarios were structured on the basis of globally recognised standards of Advanced Trauma Life Support in clinics (ATLS) and Prehospital Trauma Life Support (PHTLS) or standard care for cardiovascular emergencies. Starting off with simple national scenarios, we increased the complexity through patient transfer-acceptance scenarios between nations, up to trauma room scenarios in a multi-national team.

The learning objectives are the improvement of communication in critical situations, such as clear unequivocal instructions and the application of the read-back principle for closed loop communication. The acceptance of cultural differences in multi-national cooperation and dealing with different military hierarchies and team concepts, e.g. the specialised nurse for anaesthetics has an officer’s rank in one nation but that of a non-commissioned officer (NCO) in another. Problems in operating medical equipment, such as an anaesthetics device with a foreign (German) system language, different measuring units for volumes and dimensions and incompatibilities between medical gases and their connections, are only some of the issues covered in the debriefing, all of which may put the patient at risk especially in critical situations.

All the participants rated simulation training, prior to deployment, on deployment-related medical scenarios in a multi-national team as an important supplementary building block to the national preparatory courses for deployment. This positive response to the pilot course convinces us to present this course bi-annually in future, at the Bundeswehr Hospital in Hamburg. The next course is scheduled for 12 to 16 November, 2012.

In military medicine, neither the potential of simulator training nor the knowledge about “human factors and limitations” have been exhausted yet. It is highly desirable to apply this form of training in the education of all personnel involved in the rescue chain - from the “point of wounding” to the transport home. Our objective should be to implement CRM in the medical service as practiced in aviation, in order to sustainably improvesafety and quality in caring for our patients.