These guidelines describe a systematic approach to military pain management from the point of wounding to the Role 3 Field Hospital. They incorporate the lessons learned over the last twelve years of conflict in Iraq and Afghanistan and may also serve as a useful guide for other medical personnel working in austere and challenging circumstances.

Pain may be defined as ‘an unpleasant sensory and emotional experience associated with actual or potential tissue damage, or described in terms of such damage’.[1] The provision of high quality pain management on deployed overseas operations is now recognised as an essential component of modern military medicine.  In the United Kingdom Defence Medical Services (UK-DMS) we achieve this using a multi-faceted approach to the physical and emotional components of pain from the point of wounding through to the rehabilitation phase in the UK.

The UK-DMS have recently completed a major revision of our Clinical Guidelines for Operations (CGOs).[2] These aim to provide practical, concise guidance for deployed clinicians. Here we present our revised guidelines for acute pain management, incorporating lessons learned over the last twelve years of conflict in Iraq and Afghanistan. In this article we hope to share our experience with the wider international community in the hope that this may prove useful to others working in austere and remote environments.

Contrary to historical reports that soldiers wounded in battle require little analgesia,[3] a recent British Army study found that at least two thirds of casualties recalled moderate to severe pain.[4] There are many reasons to treat pain quickly and effectively, not least for humanitarian reasons. Good analgesia is also thought to improve recovery from injury and may protect casualties from post-traumatic stress disorder.[5]

The types of analgesia available during the evacuation chain depend on the capabilities of medical personnel at each stage. The UK-DMS use an echelon system to describe the stages of care, with Role 1 being forward battlefield care by military paramedics and general practice doctors; Role 2 being a medical facility with a small resuscitation team and possibly a field surgical team; and Role 3 being a field hospital with operating teams and an intensive care unit. Role 4 is used to describe medical establishments in the UK or similar and is outside the scope of these guidelines.

A simple pain scoring system of 0 (no pain) to 3 (severe pain) is used to simplify reporting and decision-making. This has been used at all echelons within the UK-DMS since 2009 [6] and in acute pain studies for decades.[7]

Simple splinting and packaging of fractured limbs is an essential first step in reducing haemorrhage and aiding pre-hospital pain control. In addition simple analgesics are an important first rung on the analgesic ladder.

UK service personnel are the only international force to be individually issued with 10 mg prefilled syringes of morphine for self or buddy-buddy intramuscular injection. Military paramedics can also give intravenous morphine. However, IV access can be difficult in casualties who are vasoconstricted due to haemorrhage or environmental conditions, especially in a tactical environment. Fentanyl lozenges, which appear similar to small lollipops, may also be useful in the pre-hospital phase as they do not require vascular access. They do, however, require a fully conscious and compliant casualty.

If a medical officer is present, ketamine may also be available, and is especially useful in conjunction with IV morphine (for longer acting analgesia), and where procedural sedation is required to reduce and splint limbs. Although safer than some alternatives, ketamine should be used with caution as it can cause excessive salivation, and potentially laryngospasm and airway obstruction.

Analgesia at Role 2 and Role 3

At Role 2 it may be possible to provide single dose peripheral nerve blocks and/or patient controlled analgesia (PCA) infusions. From Role 3 onwards, peripheral nerve catheters and epidural analgesia become important, especially in the post-operative period and to aid analgesia during onward evacuation.

The current PCA device used by the UK-DMS is a simple elastomeric pump delivering a fixed 0.5 ml bolus with a 6-minute lockout time. This device is entirely mechanical, which importantly removes the requirement for a power supply and any risk of interference with aircraft electronics during evacuation.

When sterile conditions are available, epidural analgesia becomes a useful option. The combination of excellent pain relief and minimal side effects has resulted in this becoming a key component of advanced pain management on recent operations.

The military environment and the trauma patient may, however, present situations where the risks of epidural analgesia outweigh the potential benefits. In particular, bleeding risk from trauma-induced coagulopathy must be considered. The UK-DMS guidelines use a table adapted with permission from The Association of Anaesthetists of Great Britain and Northern Ireland, showing the relative risks of different blocks in the presence of coagulopathy. We recommend using an opioid-free epidural infusion, so that an IV morphine PCA may be added for additional analgesia if required.

For isolated limb injuries, continuous peripheral nerve blocks offer a useful alternative to epidural analgesia from the Role 3 hospital onwards. The UK-DMS uses Ropivicaine 0.2% as the standard agent for continuous infusion due to its relatively low cardiac toxicity. Typically, this is given at a fixed rate of 10 ml/hr in adults.

The value of epidurals and continuous nerve catheters continues after return to the Role 4 hospital in the UK. The need for multiple repeat dressing changes and further wound debridement means these techniques remain important during the continued care of trauma casualties.

Due to the risk of developing chronic neuropathic pain in patients with neural damage (eg amputation or crush injury), the UK-DMS recommend early initiation of anti-neuropathic pain medication. Patients at risk are commenced pre-emptively on amitriptylline and pregabalin within the first 2-3 days after injury.

These guidelines describe a systematic approach to military pain management from the point of wounding to the Role 3 Field Hospital. They incorporate the lessons learned over the last twelve years of conflict in Iraq and Afghanistan and may also serve as a useful guide for other medical personnel working in austere and challenging circumstances. n 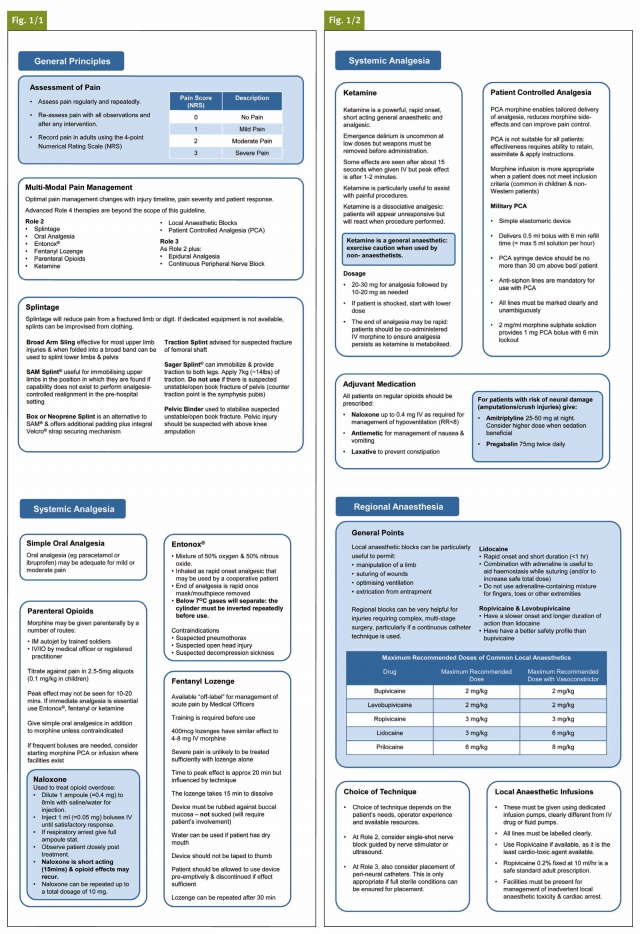 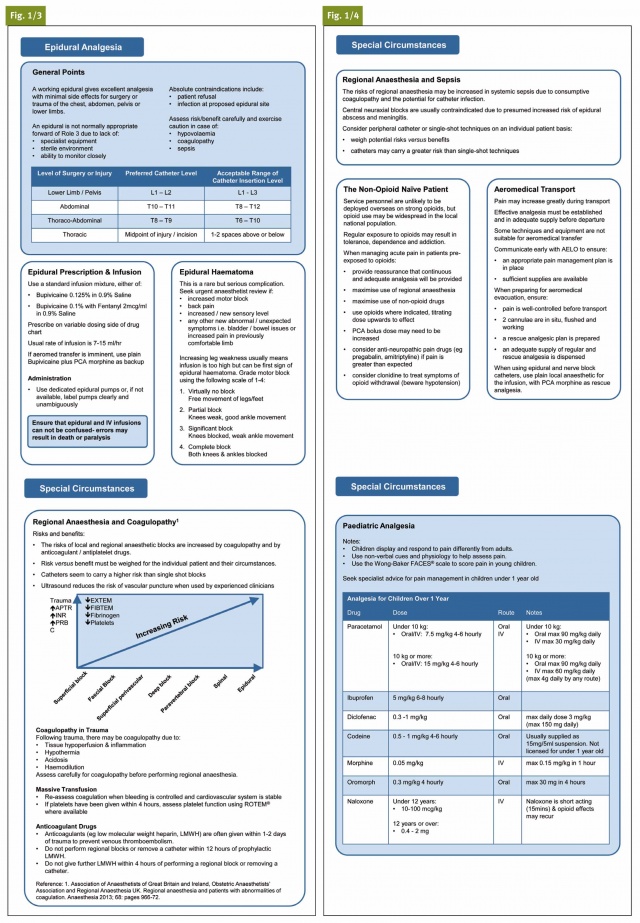 Nick is a Consultant in Critical Care and Anaesthesia for the Royal Army Medical Corps, based at Ministry of Defence Hospital Unit, Portsmouth, UK. He first served overseas in Iraq in 2003 with 16 Air Assault Brigade as a medical officer responsible for a front-line infantry battlegroup. More recently, he deployed to Afghanistan in 2010 and 2014, where he served as an anaesthetist and intensivist in the UK Field Hospital, and with the helicopter-based Medical Emergency Response Team. In addition to his military work, his experience of major civilian trauma includes a year’s Trauma Anaesthesia Fellowship at Shock Trauma Center, Baltimore USA.