In the Czech Republic with its more than 10 MIO inhabitants, about 450.000 RBC units/year are collected and transfused. Blood collection and processing are performed in a relatively close system of 64 blood centres, with 2.500 – 30.000 collections of whole blood units annually.
Based on the Resolution of the Czech Republic National Security Council from 2008 the Ministry of Health and Ministry of Defence were tasked with the enforcement of “The Crisis Setup of Health System” - containing the blood crisis policy. The aim is to guarantee a sufficient as well as efficient supply of blood products and blood derivates in any place of the country during any crisis situation, such as mass accident, disaster, terrorist attack or war. The responsible government institute, the Ministry of Health, cooperates with the Ministry of Defence.

Blood substitution and blood supply are permanent strategic and logistic problems of the military medical service all over the world. There are three main reasons for this: a, blood is a biological drug, b, blood needs special transport and storage conditions, c, blood has a limited shelf life. This problem is to be solved by the so called “national blood crisis policy”, especially in cases of huge immediate demand for blood, i.e. during natural disasters, terrorist attacks or wars. Not all crisis situations need vast amounts of blood, but an unorganized panic could lead to an extensive blood drive, followed by a massive expiry and liquidation of blood products.

Certain situations require sufficient quantities of blood, and it is necessary to know how much of it and when.

Under both scenarios, problems with blood supply are often caused by destroyed infrastructure which brings about logistic and transportation problems.

Therefore all governments should have some kind of emergency plan for situations leading to blood shortage. The solution can be designed jointly for civilian and military medical services, or separately. The aim of this article is to describe the system of blood crisis policy in the Czech Republic.

The Czech Republic has a population of over 10.5 million and spreads over an area of 78.866 km2, with the east-west distance of 480 km and the north-south distance of 300 km. Blood collection and processing are performed in a relatively consistent manner at 64 small blood centres, with 2.500 - 30.000 collections of whole blood units done annually.  Blood centres (blood banks) fall under the regional or university hospitals as their specialised departments. All of them collect, process and test blood. Only some of them collect and process blood from donor collection points or by mobile blood collection. Blood banks are civilian, with one military exception – Department of Haematology and Blood Transfusion of the Central Military Hospital Prague. 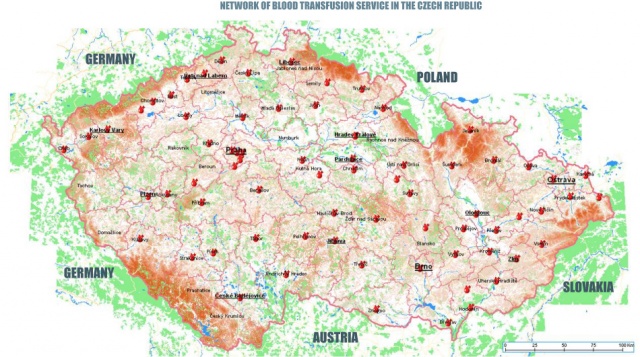 The genesis of the Czech blood crisis policy is linked to the development of the current national crisis health system. Based on a resolution of the Czech Republic National Security Council (res. no 19 from April 15, 2008), the Ministry of Health and the Ministry of Defence were entrusted with an implementation of “The Crisis Setup of Health System” - the method of blood crisis policy. The implementation process was preceded by a research work in the field of RBCs freezing and by a construction of the Strategic Blood Bank in the Central Military Hospital of Prague (2003 – 2005). In the end of 2008, the method of blood crisis policy was issued in a bulletin of Ministry of Health and now serves as an elaborate plan for handling the Czech blood supply during a national crisis situation.

The aim and principles

The aim is to guarantee a sufficient and efficient supply of blood products and blood derivates in any place in the country during a crisis situation. In an extreme situation, such as war in the Czech territory, it is estimated that casualties of 2% would demand 3000 units RBCs / day.

The responsible government institute, the Ministry of Health, cooperates with the Ministry of Defence. The system was designed according to the needs of the Czech defence and health care, and the state accounts for the blood supply. This guarantees a unified organization and a centralized management of blood and blood derivate supply.

The system includes seven national “blood crisis centres” (BCC), one military and six civilian. The central role is held by the military blood transfusion centre in the Central Military Hospital Prague (in the Department of Haematology and Blood Transfusion) and has been named “Central Informative and Logistic Centre” (CILC). Each of the seven BCCs is responsible for supplying a defined territory and must have its own system of contracts with local blood banks. 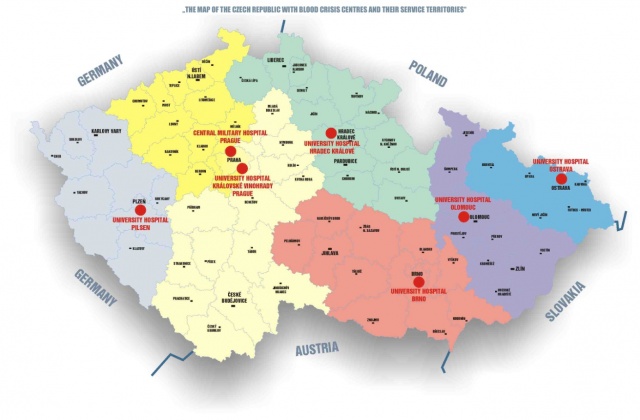 Picture 2: Blood crisis centres in the Czech Republic and their service territories

An important part of the system is the transport of blood components during crisis situations. BCCs are responsible for transport and distribution of blood products and may seek assistance with transport coordination from the Ministry of Health. The BCCs are required to keep at least 200 RBCs and 200 plasma units and 20g of fibrinogen at a permanent disposal for the national crisis policy program. CILC collects up-to-date information from each BCC about available blood and plasma units. This information is updated daily every morning. In addition, BCCs must have emergency stocks for blood collection (blood bags, tubes) and for blood testing (2000 - 2500 sets), depending on the size of the area covered by the BCC.

As mentioned, CILC has the leading role in the system and such role encompasses the following tasks: 1. to activate BCCs based on an information from Ministry of Health, 2. to coordinate the distribution of blood, 3. to call the Ministry of Health to coordinate transportation, should that be required, 4. to administer the central database of free blood units and to supervise the daily supply, 5. to collect up-to-date information from each BCC every morning about available blood and plasma units, 6. to stay on top of the system’s functionality.

The system and methods are trained periodically and major emphasis is put on the communication. 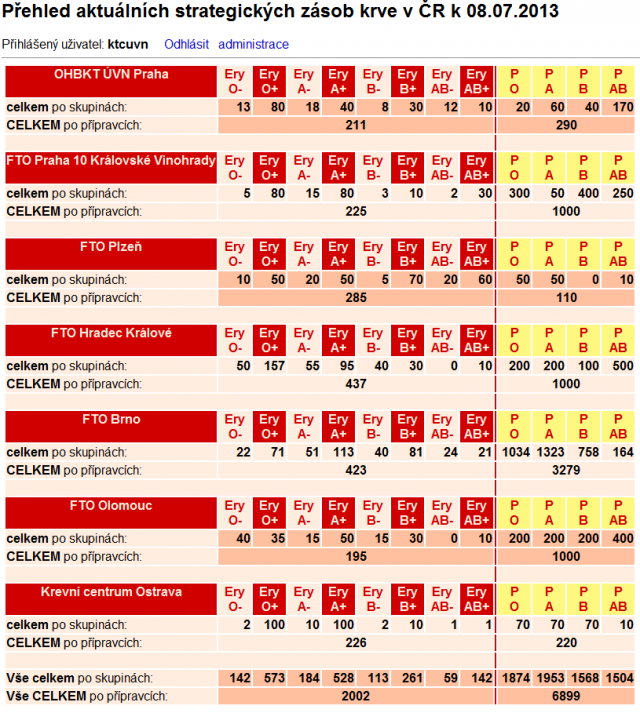 There are three possible scenarios that may activate the blood distribution system:

a) An extraordinary incident (possibly causing mass casualties) and a declaration of the second or first alarm level as described in the emergency plan of the Integrated Rescue System.

b) A declaration of “crisis state” accompanied by mass casualties.

c) A state of emergency or a state of war.

Each BCC can call for the system activation based on an evaluated, specific situation. Following this, the system is activated by the Central Informative and Logistic Centre. The crisis level can be proclaimed by a central or local health care authority, or by the government. Depending on the crisis level’s degree, the BCC may solve it together with CILC on its own level or in cooperation with the Ministry of Health. Any state of crisis is coordinated by CILC.

A blood bank with frozen blood, located in the Central Military Hospital Prague, plays a special role in the Czech crisis policy; it is designed for 3000 units of frozen red cells (group 0). The closed system Haemonetics APC-215 is used, red cells, frozen in 40% glycerol, are stored in -65°C in mechanical freezers and their shelf life after reconstitution in solution AS-3 (Nutricel) is 21 days. The military blood bank can provide a blood supply during any crisis in three forms: 1. common (liquid) RBCs (0 neg.) which are available in stock, 2. thawed (reconstituted) red cells (0 neg./pos.), 3. fresh, newly collected red cells. Eight pieces of Haemonetics ACP-215 machines render a theoretical capacity of 96 reconstituted frozen red cell units per 24 hour.

Lately, since 2014, frozen platelets are available to use, as well. Platelets, group 0, are frozen with 5% DMSO and reconstituted in thawed plasma group AB.

The method of blood crisis policy in the Czech Republic represents a model example of joint cooperation between military and civilian medical service as it capitalizes on the benefits to both fields. The civilian blood transfusion service covers the majority of demand for blood products, while the military blood bank coordinates the distribution and provides the special blood freezing programme.

Milos Bohonek graduated at 1986 from Charles University in Prague. His first specialisation was paediatrics. In years 1986 – 1991, he worked as a paediatrician in a regional hospital and as practicing paediatrician. In 1992, he specialized in the field of haematology and blood transfusion service, and headed a transfusion and plasmapheresis centre of the regional hospital in Melnik and a local haematology clinic until 1995. Afterwards, he headed the plasmapheresis centre in Prague. In 1996, he joined the Army of the Czech Republic and was appointed Head of Department of Haematology and Blood Transfusion in the Central Military Hospital Prague; a year later, he became the main consultant for haematology and blood transfusion in the Czech Army Medical Service. In 2003, he joined an international mission to Iraq with the 7th Field hospital of the Czech Army and served as head doctor of the laboratory and the blood bank as well as a paediatrician. During 2005-6, he was deployed to the NATO humanitarian mission “Winter Race” in Kashmir, Pakistan, as a member of the Czech medical team in a Dutch field hospital. In 2008, he finished a doctoral study with a research paper titled “Cryopreservation of Red Blood Cells – the Development and Establishment of New Methods”, and received his PhD.