Due to the sharp decline of infection figures from mid December 2014 to February 2015, the approach of fighting the Ebola epidemic was to adapt. Main topic was the change of concept from “Ebola Treatment Units” (ETU), only supporting Ebola patients, towards “Severe Infections Temporary Treatment Units” (SITTU), treating severely infected patients in order to dismantle a probable Ebola infection. The aim was to prepare the assumption of responsibility for their national health service by Liberian health care professionals as efficiently as possible and to accompany this approach technically closely and effectively.

In August 2014, the World Health Organization (WHO) declared the Ebola epidemic a “global health emergency”. Since the beginning of the year, the virus had spread from Guinea, via Sierra Leone down to Liberia. Up to this moment, some 1,000 people have died, nearly 2,000 have been infected. With this declaration, the affected West African states were required to implement health regulations, in particular in the field of infection prevention and control.

As early as September 2014, the Government of the Federal Republic of Germany decided to support the fight against the Ebola epidemic: in addition to the provision of extensive financial resources, the Foreign Ministry was charged with the leadership for a relief mission in the Republic of Liberia. On 22 September 2014, the Federal Minister of Defence, Ursula von der Leyen and the Federal Health Minister, Hermann Gröhe, called on members of the health professions, to enlist voluntarily for a participation in the relief mission. More than 5,000 people (were affiliated) responded(?).

After appropriate civilian and military participants had been selected the German Red Cross (GRC) assumed responsibility for the mission, accompanied by a support element of the German Armed Forces (Bundeswehr). The aim was to take over and to operate a WHO built treatment facility in the capital Monrovia, a so-called “Ebola treatment unit”.

Early in October 2014, a joint team of the GRC and the Bundeswehr explored the situation on site. This preliminary mission was followed by forces setting up the material equipment and preparing the main operation.

In the phase of emergency assistance adopted by the Federal Government, the first joint contingent of GRC and Bundeswehr took over the responsibility for the ETU by the middle of December 2014. Due to the actual situation of the infection and following the international evaluation, the implementation of the WHO concept “ETU” had priority.

After the formal accreditation of the institution by WHO officials, the formal opening of the “German ETU” by Liberia's Deputy Health Minister took place on 23 December 2014. 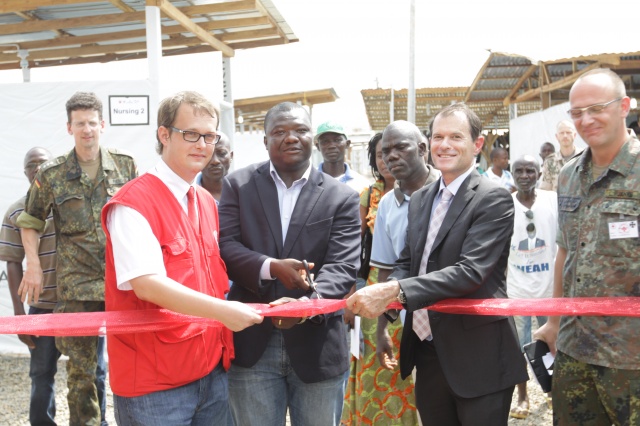 Fig. 1: Opening of the “German ETU” (by Bundeswehr/Dennis Kraft)

15 delegates of the GRC and 30 soldiers of the Bundeswehr were reinforced by 110 Liberian health care professionals. Until mid-January 2015, their training was carried out jointly, without Ebola patients, the so-called “cold training”. Thus, valuable insights into the various processes of the facility could be won and these could be adjusted accordingly.

In addition to the emergency aid to the population, contributing to the restitution of the national public health systems was also part of the German relief mission. For this purpuse, the German team contacted the largest hospital in Liberia, the “John F. Kennedy Medical Centre” (JFKMC), selected for cooperation by the International Committee of the Red Cross (ICRC).

At this time, the total numbers of Ebola patients in Liberia had already dropped by 95%. Due to the resulting overcapacity, the German ETU was placed on “Standby”.

But at the same time, there are still those 5% left. And taking care of these patients requires enormous efforts because the last of them hide in a “swamp of infections” among widespread and highly dangerous diseases, such as malaria, cholera, yellow fever, typhoid fever or meningitis. Due to the lack of human and technical capacities, the previous ETU concept could not meet the expectations. The health authorities of Liberia had to adapt the national Ebola strategy. In a first step, the Ebola crisis management based until then in the Ministry of Health and Social Welfare was decentralized. In the meantime, four crisis intervention teams were set up for the capital Monrovia and the surrounding townships of Montserrado County.

Thanks to the intensive participation of the head of the Bundeswehr support element of the GRC and expert in tropical Medicine Lieutenant Colonel (MC) Christian Janke, the national health authorities decided to implement the concept “SITTU”. Based on their capabilities of screening and treating highly infectious patients, these units were to filter out the remaining cases of Ebola and optimize the treatment of all patients admitted.

The visit of the Special Representative of the Government of the Federal Republic of Germany for the fight against the Ebola epidemic, Ambassador Walter Lindner, on 23 January marked the beginning of this new stage. Being one of the last to close a classic ETU, Germany took the lead of the international assistance opening the first SITTU in Liberia. 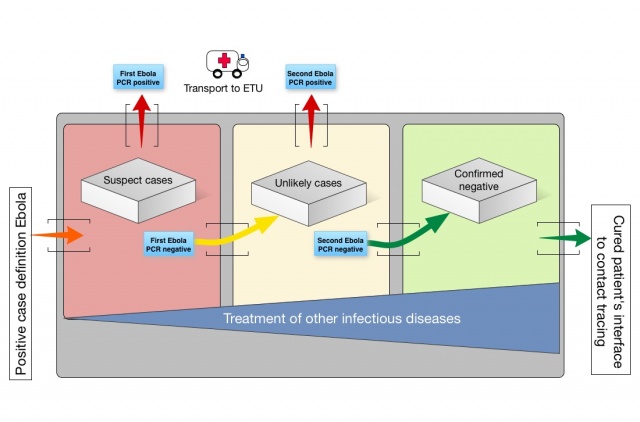 In addition to the therapeutic function of this institution, the training of Liberian health care professionals in handling the personal protective equipment, applying triage and carrying out treatment of “suspected” cases as well as of severely infected patients continued. In order to meet the increased requirements, the number of local health workers was raised up to 160.

The cooperation with the JFKMC was also adjusted. In addition to the technical assistance – as the repair of generators, power supply, washing machines and dryers – the responsible departments were supported in constructing a triage building – preventing Ebola patients from entering the hospital. Also, staff training on new medical devices was implemented, such as an ultrasound course for physicians. After the massive losses among the local health care personnel caused by the Ebola virus disease (EVD), all these measures are targeting on restoring the confidence of the population in the national health services. Even today, patients presenting themselves with unique EVD symptoms in public health institutions, are not detected, threatening medical staff and other patients. Up-streaming a SITTU could save future healthcare facilities not only from overload, but also assure qualified treatment of the Liberian people. 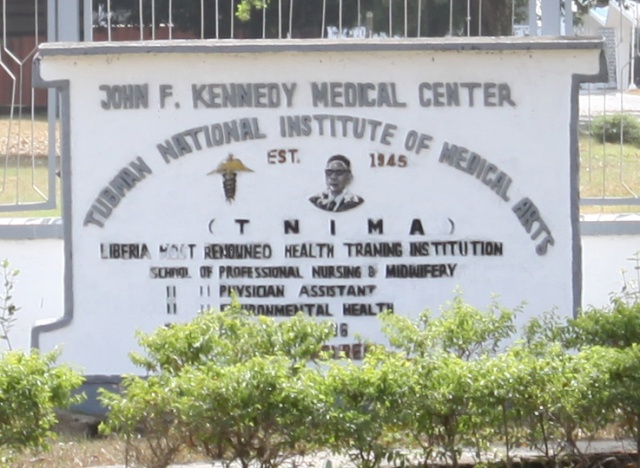 The medical support of the “United Nations Mission in Liberia” (UNMIL) is also part of the program ‘Mentoring and Enabling’ of the German mission “Humanitarian Aid Western-Africa”. The UN Security Council established the military mission UNMIL in September 2013. Currently 4,500 soldiers, 1,400 police officers and 1,500 civilian experts support the restoration of constitutional order by coordinating the reconstruction of official institutions and the economy shattered by the civil wars. Germany is contributing to the mission with five police officers. On request of the Liberian Ministry of Health and Social Welfare, the Bundeswehr support element of the GRC has assured the medical care for two members of UNMIL and their subsequent transport into a treatment facility. The German military contingent also supported UNMIL by implementing a medical facility and corresponding processes within their compound.

This phase of “Mentoring” and “Enabling” of the Liberian health care system should last until early February 2015.

From mid-February 2015 to early March 2015, responsibility is passed step-by-step to the Liberian health care professionals trained in the SITTU. At the same time the retreat of the Bundeswehr support element of the GRC will be an important sign of this phase. This is associated with a major relocation of technical activities in the participating institutions.

In the first step, triage and treatment will be assured only by the SITTU. But at the same time, the Liberian staff will take over the responsibility for the management of the institution. The cooperation with the JFKMC is focused on the training projects.

Step 2 provides triage of patients in the German SITTU as well as in the JFKMC. Therefore, part of the trained local health care personnel has to return from the SITTU to the hospital. Nevertheless, the qualified treatment of suspect patients will take place exclusively in the SITTU.

During step 3, the triage of patients will completely be handed over to the JFKMC. In order to do so, additional Liberian professionals have to be transferred to the local health facility. Despite the increasing transfer of responsibility into national hands, the patient care will only be assured by and at the SITTU.

In the last step, triage is carried out at the JFKMC. But now the treatment of patients is taken over by qualified departments of the JFKMC as well as by other appropriate public health institutions. In this phase, the remaining Liberian health care professionals are transferred from the SITTU to local health care facilities, and the German institution will be closed.

Formed by the GRC, the Bundeswehr and the Liberian health care workers, the German relief mission “Humanitarian Aid West Africa” has made an important contribution to fighting Ebola virus disease during the last three months. Fortunately, the treatment of Ebola patients never became a subject for the team. Therefore, the German contingent participated in the restitution of the national health care system and the sustainable training of local health care specialists.

The transition of the German institution from the last “ETU” in Monrovia to the first “SITTU” in Liberia reminds of the image of a rising “Phoenix”. Having overcome this health disaster, it is to wish that this process were to be a real help for the people in Liberia on their way back to normality! 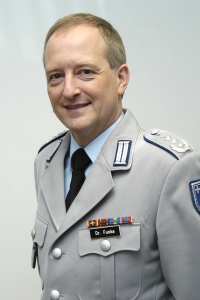 Head of communications department/Chief of press and information centre

Adress of the author: