Experiences in the Last Decades

Urogenital combat trauma has been reported with a frequency of about 5 % over the last decades. However, owing to a change in combat tactics, this rate has increased up to 12 % during recent years, caused as a rule by injuries to the external genitals through the impact from IED. A broad surgical uro-oncological training is mandatory to gain the necessary skills for treatment of complex urogenital trauma, especially as in Germany the rate of trauma is rather low.

Current data from the American Joint Theater Trauma Registry gathered from deployments in Iraq and Afghanistan indicate a marked rise in urology-related injuries in recent years, to as high as 12.7% in 2010 (Fig. 1) [11]. 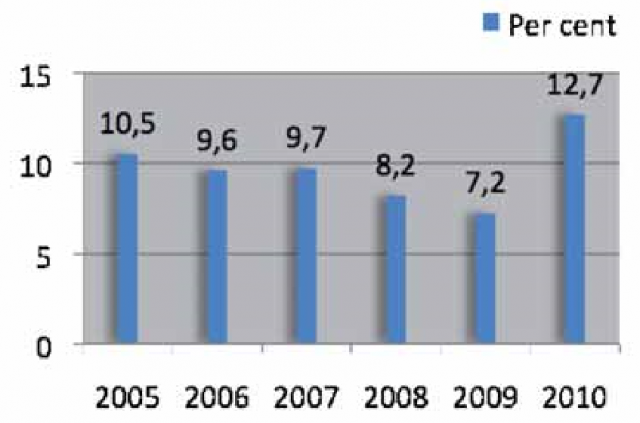 Fig. 1: Incidence of injuries to the urogenital tract in OIF and OEF between 2005 and 2010

According to the experiences of recent decades in the wars in Korea, Vietnam and the former Yugoslavia, a rate of urogenital combat trauma of 3 - 5% was observed. The data from the Second World War, with a urological injury rate of less than 1 % is likely to be associated with a significant number of unreported cases due to the very high mortality of abdominal injuries [2] and therefore is of only limited informative value (Tab. 1).

Tab. 1 Rate of urological combat-related injuries Percentage of all injuries sustained during the conflicts of recent decades (modified according to [2]).

According to isolated reports from Croatian and Bosnian hospitals [7, 8], around 2.5 % of the injuries treated during the combat in the former Yugoslavia were urogenital (Tab. 1).

An analysis of American experiences between October 2001 and January 2008 taken from the Iraqi Freedom and Enduring Freedom operations (Tab. 1) already showed the rising trend towards a higher incidence of urogenital injuries with a rate of 5 % [5]. One in ten of these patients died due to significant concomitant abdominal injuries [5].

The American military hospital in Landstuhl, as a role 4 facility, treated 288 soldiers with urogenital injuries over a 3-year period until August 2012 [3]. The most common cause of these was IEDs (Improvised Explosive Devices) at 82 %, while 65 % of patients affected by urological injuries also had to have one or more limbs amputated. Injuries to the testes - either unilateral or bilateral testicular rupture - were most frequent, affecting 62 % of cases [3].

In light of the growing number of urological and in particular genital injuries, the report by the Army Dismounted Combat Battle Injury Task Force in 2011 put special emphasis on urological problems and, as a result, recommended the permanent deployment of a urologist in the role 3 military hospital [11].

Not only has the incidence of urological injuries changed over recent decades, but so too has the pattern of injuries affecting the urological organs. While kidney injuries occurred in 40 - 53 % of cases in the Second World War and also in the conflicts in the former Yugoslavia, the use of protective vests, as well as changed combat tactics involving explosive weapons, has led to a marked increase in the number of injuries to the external genitalia [1, 2, 5, 6, 7, 8]. The penis, scrotum and testes, as well as the anterior urethra, are affected in up to 60 % of cases, while renal injuries are reported in only 20 - 30 %. Ureter injuries remain a rare diagnosis and are described in 2 - 7.8 % of cases in literature. Urinary bladder injuries occur in around 20 % of cases, with a slightly increasing frequency [2]. Although there may not be any isolated data for injuries to the urogenital organs, it is possible to establish that a marked improvement in mortality rates has been achieved over recent decades, along with a reduction in injury-related morbidity. This has been caused decisively by the dramatic improvement in transport times and the optimisation of emergency medicine facilities. These achievements have also been contributed to by early and prompt diagnostic imaging and modern urological surgical techniques such as kidney or testicle-preserving operations or endo-urological procedures for injuries affecting the ureter and urethra.

Tab. 2: Percentage comparison of urogenital injury patterns in the conflicts of recent decades (modified according to [5]). Injuries to the scrotum, testes and penis are grouped together.

Consequences for urology in the German Armed Forces

These often complex procedures following urogenital trauma are fortunately not seen in great numbers in Germany nowadays. Even major hospitals offering maximum care often see no more than 10 urological injuries a year, of which only around 60 % are severe cases [10].

Urotraumatology literature primarily reports on retrospective studies of blunt injuries; reports of penetrating injuries and in particular of explosion-related injuries are a rarity.

The lack of urotraumatology practice therefore represents a need for the urologist in the field to gain broad urosurgical training, especially with uro-oncology procedures, which most accurately reflect trauma situations. Close involvement with the hospital's trauma centre is as much a necessity in this context as training in the principles of damage control surgery. Under operational conditions, a nephrectomy performed on a critical patient instead of a kidney-preserving operation, or temporary urinary diversion instead of a ureter reconstruction, can be life-saving and the injured solder can then be repatriated in a stabilised condition for definitive care.

The urologist in the field must always be inventive and ready to consider innovative approaches. A standardised procedure based on the learned principles taught during a urology trauma course should however enable the urologist to manage most urological injuries in keeping with the maxim of the medical service.

In summary, injuries to the urogenital tract are being seen with a significant and increasing frequency in current deployments; in the usually young patients they affect, they are associated not only with potential physiological trauma, but also with substantial psychological stress. In accordance with the pattern of injuries observed, the urologist in the field must most of all, in addition to acquiring expertise in renal and pelvic surgery, undergo intensive training in plastic and reconstructive surgery of the external genitalia.