A twenty-year experience of the emergency medical response of FMH of All-Russian Centre for Disaster Medicine “Zaschita” is analyzed. Technical and specialized potential of the hospital is presented, as well as layout of its work and principal variants of its deployment.

The analysis of the medical care delivery to the injured during the devastating earthquake in Armenia (1988) gave rise to the scientific opinion about the necessity of establishing a special medical field unit responsible for development of fundamentals of emergency medical response to different natural and man-made disasters (Fig.1), and also for organization of medical care delivery in practice to the population and rescue teams in emergency zone. 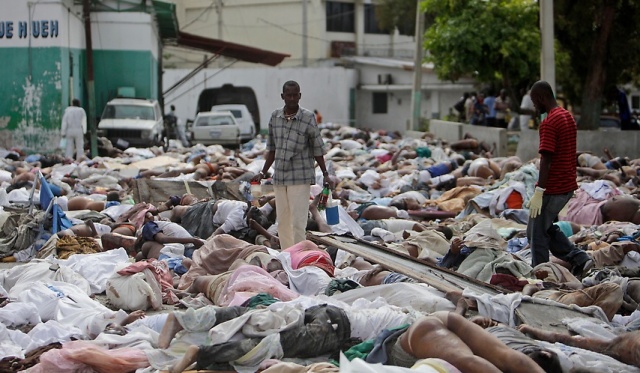 Fig. 1 Aftermath of the Haiti Earthquak 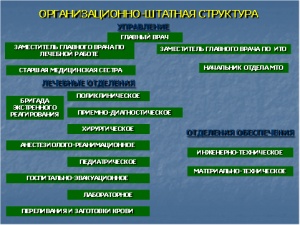 With that aim in view, a mobile medical unit  field multipurpose hospital  was established as part of the All-Russian Centre for Disaster Medicine “Zaschita” in 1994.
The twenty-year working experience of FMH proved useful and correct. The efficient operation of FMH in the field formed the basis for establishing similar units in other regions of Russia and in some foreign countries.
The FMH Staff Chart (Fig.2), its medical and technical equipment make it possible to deploy a field medical facility for 50 - 100 beds of a necessary profile and to provide its autonomous operation for 45 - 50 days in different climatic zones in the field conditions, in appropriate premises or in local health care facilities. 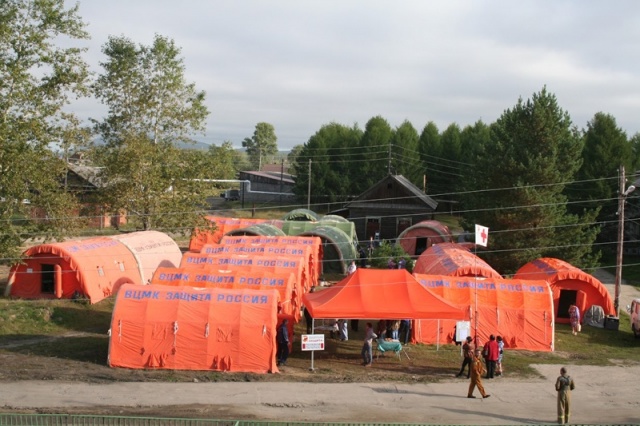 Fig. 3 General View of Multipurpose Hospital Delivering Medical Care to the Injured in Flood in the Far East, 2013

The circumstances arising as a result of the emergency bring about the necessity to employ disaster medicine field hospitals of different profiles, especially when the local health care facilities are destroyed. The tactics of FMH medical employment includes the following primary variants: surgical, therapeutic, pediatric, infectious and multipurpose. The possibility is provided for the part of FMH advancement to emergency zone. 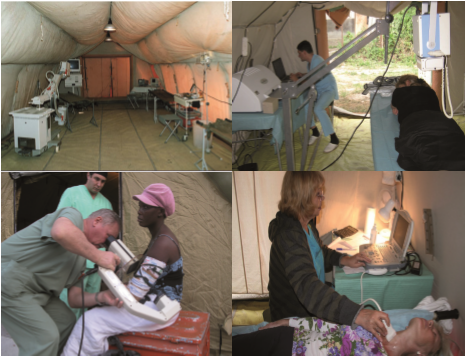 The set of medical equipment and devices meets the requirements of a municipal outpatient clinic, the FMH is reinforced by mobile radiographic units, ultrasonic scanners, analgesia and breathing equipment and monitors.
Instrumentation for dressing and operating rooms and resuscitation allows to perform the primary volume of surgical interventions, anesthetic and resuscitation procedures to adults and children. 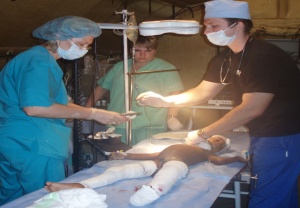 pendent resuscitation department with a special equipment is deployed for neonates and infants.

Terms of in-patient treatment are specified by medical and tactical setting.
Engineering and technical service provides operation of the FMH in the field (deployment and maintenance of inflatable modules, energy-, heat-, water-, food supply, communication, etc.).
Mobile complex of operational control and communication supports round-the-clock activity with the Centre, conducts telemedicine consultations with the leading specialists from Federal medical institutions. 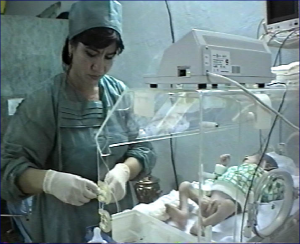 Since the very start the FMH had worked in different emergencies as surgical, multipurpose, therapeutic, pediatric and TB. The experience shows that though emergencies and disasters are varied in nature, mechanical injuries prevail over other pathologies. Hence, the surgical profile is the basic variant for FMH deployment and operation. Rapid response teams (RRT) advancement to the emergency zone is in the greatest demand. These teams are formed and staffed with the specialists in accord with a specific task, who are able to work in an autonomous routine up to two weeks.
Based on the working experience, 6 variants of FMH resources and manpower employment in 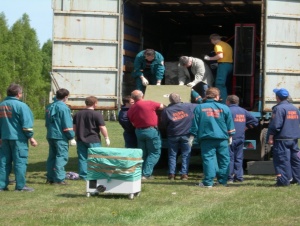 different emergencies were elaborated. They proved to be practical and efficient.

In the first 2 variants the rapid response team (RRT) as part of the operational group of ARCDM Headquarters advances in the direction of emergency zone, conducts medical reconnaissance, helps to organize operation of local health care facilities (HCF), delivers medical care. In the first variant the RRT works on the basis of local HCF, in the 2d – autonomously, it deploys a triage site and anti-shock module.
In the 3d variant for reinforcement of medical service secondary medical care teams advance in the direction of emergency zone; thus, the volume of medical care increases up to a secondary one. 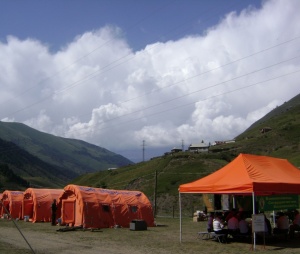 he 4th variant the FMH is deployed without a hospital base. This variant is appropriate for local emergencies where mechanical injuries prevail and there is an arranged system of evacuation.

The 5th variant provides for advancement of a number of RRTs to deliver care to the injured with combined injuries (toxicological and radiological). In this variant, depending on the profile of the patients a toxicological-therapeutic or other appropriate hospital is deployed.
In the 6th variant the FMH advances and is deployed at full strength.
To provide the lasting work in the field a shift routine (duration of shift - up to 7 weeks) was employed with involvement of multipurpose specialists from various regions of the country. For example, during FMH operation in the North Caucasus in 1994-1996 and 1999 - 2003 more than 400 non-staff workers from 38 Russian regions were engaged (Nizhny Novgorod, Yekaterinburg, Tatar Republic, Kurgan, Stavropol Territory, Smolensk, etc.).
Since the date of the FMH establishment its workers took part in emergency medical response to local armed conflicts, terrorist attacks, natural and technogenic disasters: they delivered care to the wounded and sick persons – women, children, elderly people, members of emergency rescue and law enforcement units, provided medical advice and treatment in different Russian regions. 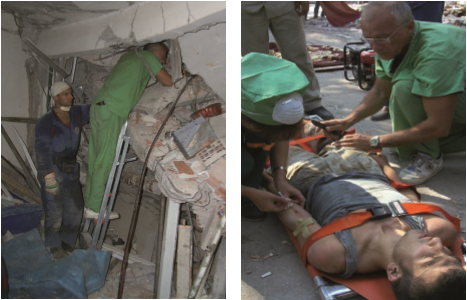 Fig. 11 Care Delivery on the Site of Emergency

More than 60 times rapid response teams (RRT) and FMH left for emergency medical response in this country and abroad. In close cooperation with EMERCOM Hospital the FMH delivered care to the people affected by the earthquakes in Colombia (1995), Turkey (twice in 1999), Afghanistan (2002), Iran (2003), Sri Lanka (2004), China (2008), Indonesia (2009), Haiti (2010), Chile (2010), during armed conflicts in the Chechen Republic (1999-2004), South Ossetia (2008). In keeping with the final results of the operation in Haiti the Russian Field Hospital was declared by WHO the best among foreign field hospitals involved in 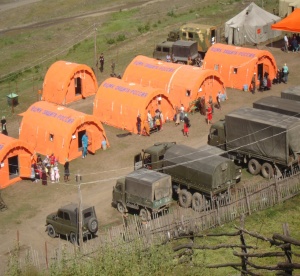 The FMH personnel published more than 200 scientific articles, defended 4 Doctors’ and 6 Candidates’ theses, applied in practice 8 new treatment protocols.
Conclusion
The field hospital concept realized by ARCDM “Zaschita” can be employed in delivery medical care to population in any emergency (local armed conflicts included), as well as in lasting disasters until the complete recovery of the public health structure in the affected region. The field multipurpose hospital model was assumed as a basis in a number of foreign countries.