A Quite Extraordinary Cause of Penetrating Thorax Trauma

During the course of the industrialisation process, the use of hydraulic systems in mechanical engineering began in 1795 with the hydromechanical drive developed by Joseph Bramah. Thanks to the potential multiplication of driving forces they offered, hydraulics produced an unimagined increase in efficiency in the labour and production process, and hydraulic technology is now widely found in all kinds of machinery and vehicles [1].

Soldiers in the German Armed Forces are faced with hydraulic technology of all kinds and the attendant dangers on deployment, during exercises and during maintenance. As a result, the understanding of mechanisms of injury, pathophysiology, possible patterns of damage and treatment principles form the basis of effective treatment and therefore are essential for complication-free convalescence without any functional deficit while at the same time preserving the soldier’s quality of life and ability to serve.

A 17-year-old patient was intubated, ventilated and delivered with a stable circulation by the rescue service to the shock room. Prior to arrival, the patient had been dismantling a hydraulic line, which was under high pressure on a digger and sustained penetrating thoracic trauma after a piece of valve exploded.

Clinical examination showed a 4 x 3 cm penetrating thoracic injury with grade II burns to the left parasternal area (Figure 1) with no apparent exit wound on the back. Breath sounds were reduced at the left apex. Heart sounds were pure, regular and there were no murmurs. A thoracic drain was inserted at the site of the accident and this had expressed only a small amount of venous blood by the time of admission. Emergency ultrasound (FAST1) and the body check as part of the Primary Survey (ATLS®2) were otherwise unremarkable. Laboratory results showed no major abnormalities and in particular there was no drop in Hb and clotting was normal. All of the individual parts of the valve were collected at the site of the accident, so the injury had been caused solely by the hydraulic oil that was under high pressure. 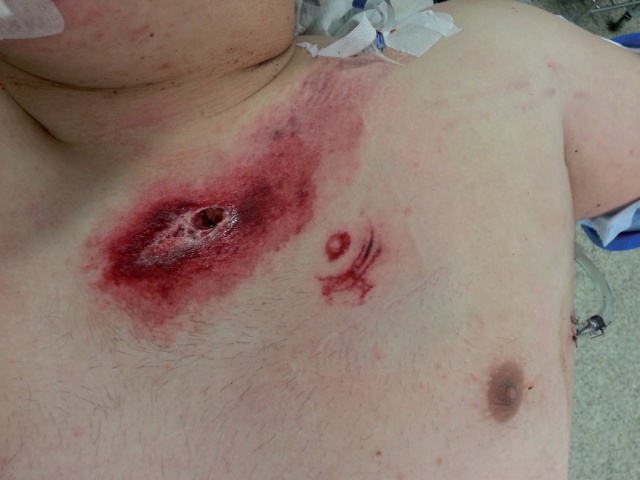 Fig. 1: Shock room: 4 x 3 cm penetrating thoracic injury with grade II burns to the left parasternal region without any apparent exit wound on the back 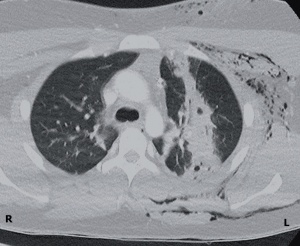 The CT scan showed a perforating injury running in the sagittal plane of the left upper lobe of the lung with a deep soft tissue injury of the ventral thoracic wall (Figure 2). The heart and major mediastinal vessels were intact. CT morphology also ruled out any foreign bodies.

It was decided to proceed to emergency thoracoscopy (video-assisted thoracic surgery = VATS) on the left and debridement in the area of the thoracic wall. Within the thorax, a cloudy, partly coagulated mixture of blood and hydraulic oil was found along with significant dirt embedded in soft tissue lesions in the area of the ventral entry wound (Figure 3). The 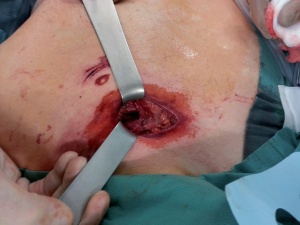 Fig. 3: Deep embedding of dirt, soft tissue lesions and grade II burns in the area of the ventral entry wound

dorsal thoracic wall merely exhibited a pleural lesion. Examination of the left upper lobe of the lung confirmed the ventro-dorsal perforation injury with accompanying significant internal bleeding, although there was no evidence of any active bleeding or fistula formation (Figure 4).

In the assumption that the upper lobe of the lung would recover in time and since the ultimate extent of the lobe damage by the hydraulic oil could only be assessed by monitoring the patient's progress, primary generous thoracoscopic debridement of the thoracic cavity and soft tissue debridement were carried out. Following extensive lavage of the thorax, a thoracic drain (24 Charrier) was inserted and the soft tissue defect closed with primary 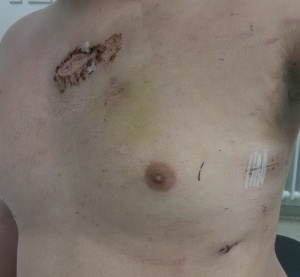 intention and the insertion of a Redon drain.

Histology showed parts of the Pleura parietalis, fasciated muscle, skin and subcutaneous tissue with fresh necroses, florid inflammatory response and embedded black, fibrous foreign material. The patient's postoperative progress was uncomplicated. The thoracic drain was removed on the eighth post-operative day. In this case, it was left in slightly longer then usual in order to be able to respond quickly with antibiotics in the event of infectious complications. The patient was discharged on the tenth post-operative
day without any symptoms and with a good cosmetic result (Figure 5 and 6). Following completion of the convalescence period, the patient was fortunately able to return to duties. 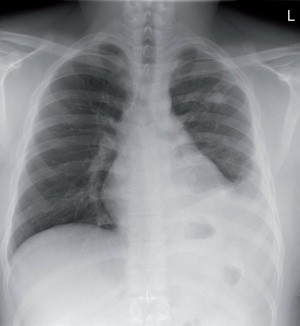 Fig. 6: chest X-ray 14 days post-operatively showing a small residual effusion at the left base and minimal consolidation of the left upper lobe (scarring as part of the healing process)

This case is the first to describe a thoracic penetration injury caused by a jet of hydraulic oil. In the case presented, not only were cutaneous burns and a dirty entry wound observed, but so too was a longitudinal perforation injury of the left upper lobe of the lung without any fistula formation or active bleeding. The remaining upper lobe and the lower lobe were found to be fully intact. No resection procedures were required. The recovery process was uncomplicated with no functional limitations and a satisfactory cosmetic result.

Penetrating injuries caused by pressurised liquids or gases occur, as in the case described, in the context of occupational accidents or DIY accidents [6]. Injection injuries are characterised by an often small entry wound with extensive tissue damage underneath, which is often under-estimated to begin with. This is why patients often do not present to doctors until a few days after the injury was sustained [6]. In view of the initially occult damage and later complications, amputation rates of 15–40% are reported for injuries to the extremities [5, 7]. Of prognostic significance in this context are most importantly the type of injected material and the time between the injury and surgical debridement. For diesel and solvents / thinners, higher amputation rates (55–70%) are quoted than for hydraulic oil (15–20%) [5]. A metaanalysis by Hogan et al. showed that amputation rates of the fingers rose to 58% and 88% if more than 6 hours were allowed to elapse before surgery or if no debridement is carried out [5]. A similarly linear relationship was also described for the functional outcome and ability to work [6].

Hydraulic circuits in construction machinery work at pressures of between 30 and 300 bar [8]. The resulting jet that causes injuries is therefore perfectly capable of penetrating healthy skin. Hart et al. report that the integument can be perforated from a pressure of 100 psi (around 7 bar) [9]. If the fluid has penetrated the cutis, it spreads – following the line of least resistance – into the subcutis, the fascia, the skeletal muscles or along the tendon sheaths in a centrifugal direction [8, 10]. During normal operation, hydraulic oil is also heated to 60–80 °C, which can result in burns in addition to the mechanical damage. Bacterial contamination of the wound must also be assumed in all cases. As a result, in addition to active or passive tetanus immunisation, a broad-spectrum antibiotic must also be considered [6]. Hogan et al. demonstrated that bacterial contamination of the resection samples and wounds occurred in 41% of cases [5]. Tissue damage typically occurs in two phases: the acute phase with necrosis and infection is followed by a chronic phase with inflammation and foreign body response [11].

The local effect of hydraulic oil and lubricant is primarily less toxic than that of dyes, solvents and thinners. The initial necrosis is less marked and the chronic phase primarily exhibits fibrosing, granulomatous reactions and the formation of discrete oil cysts [4, 10]. The only treatment for the injection of nonphysiological materials is immediate surgical debridement, generous wound lavage with isotonic aqueous solution and the insertion of a wound drain [5, 6]. The degree of resection depends on the findings, the configuration of the wound and the material injected. For uncomplicated materials such as water (highpressure cleaners) and air (compressors) with no suspicion of significant contamination, primary conservative therapy may also be indicated [12].

With fatty or oily agents involved in high-pressure injection injuries, a systemic risk of lipid pneumonia must also be considered [13]. Harris et al. report on an inguinal injury caused by a grease gun during which lubri
cant was injected into the groin and then tracked its way to the femoral vein. A few days later, the patient was diagnosed with lipid pneumonia and respiratory alteration [13]. This underlines the danger of under-estimating the often un-obvious external injuries caused by high-pressure jets and the injected material.