The Republic of Indonesia consists of more than 17.000 islands, spans almost two million square kilometers between Asia and Australia, which makes it the largest archipelago on earth. Some of the islands have a land border with neighboring countries and some outer islands have sea borders. At the outer islands, the health infrastructure is not well established yet and the population needs more attention than people on other islands.

The Indonesian Armed Forces Commander General Gatot Nurmantyo said that the Indonesian military or TNI will strengthen its force in the country’s outer islands. The number of military personnel will be increased in the near future. It is paralleled with TNI slogan; together with peoples TNI will stronger. After visiting some remote islands in Maluku and East Nusa Tenggara Province he ordered TNI Surgeon General to send a medical task force consisted of 345 personnel from Indonesian Army, Navy and Air Force to execute a medical assistance to the outer islands. The medical task force was lead by TNI Surgeon General MG Ben Yura Rimba, MD, MARS as a Task Force Commander and TNI Deputy of Territorial Assistance BG Gatot Triswanto as his Vice Commander. The operation officer was Navy Captain Wiweka, MD. Also onboard in the ship was Chief of Staff of Military Area Command XVI Pattimura, BG M.B. Taufik and Commander of Main Naval Base VII Kupang, BG Siswoyo.

LCUs ready to launched to the island 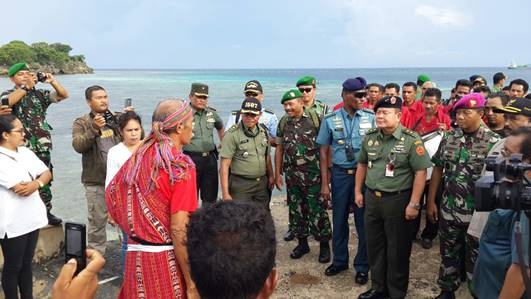 An internist, pediatrician and ENT specialist in action 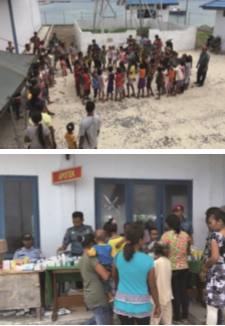 It took 28 hours to reach the first island, Lakor island, from Kupang harbor. The island was inhibited by 2.443 peoples from 586 head of family and has 5 villages. The ship sent 2 LCU to deploy the logistics and personnel. The Surgeon General and his team was greeted a warm welcome with traditional dance and a glass of traditional wine. The medical service was done in a harbor building and some selected patient who need further examination and operation being sent to the hospital ship. The marine medical battalion CO, Commander Ketut, make an interactive play and game with elementary school students about how to take care the teeth and oral hygiene, at the end he gave a free toothbrush and toothpaste. Struggle with humid air and hot environment the doctors and paramedics, organized by Col Taufik, an Army Surgeon, finished their job with 698 patients as a resulted, 4 of them being operated of their labioschisis (cleft lip) by Col Guntoro, a plastic surgeon. One of the patient who extracted his tooth got neurogenic shocked and need an air evacuation by helicopter to the ship to 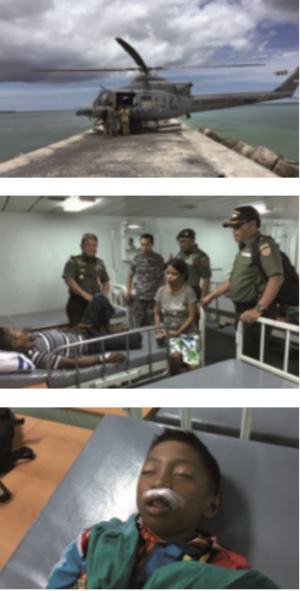 take an intensive care. He was conscious after that. At the afternoon the team came back to the ship and met the extraordinary ship dinner again……the ships then continued its voyage to the second island, Moa.

Moa was island at the west side of Lakor, an island with beautiful beach and crystal clear water. After a bumpy ride with the wave the task force disembarked at Kaiwatu Harbor of Moa Island from their LCUs. The team was greeted with local marching band playing traditional bamboo saxophones and flutes. Even with the heavy rain showering, at the end of day 1301 patients was treated with 19 of them being operated at the ship.

The third island was Letti, not far from Moa island. From the harbor to the location the team must ride a trucks through a muddy road about 3 km away, even the deputy, BG Gatot Triswanto has to ride a trike from naval post usually used for logistic transportation. The medical service was done in public health center which do not have a doctor and just run by a midwives and several nurses.The facilities in those health center was quiet enough their just lack of doctor and dentist. There were some workers from Nusantara Sehat Program (Nusantara is Indonesia, Sehat mean health), helping the nurses serving the community. Their goal is to strengthen primary health care through infrastructure, facilities and human resources. This program was launched by Ministry of Health to hundreds of public health centers with thousands of workers serving for 2 years. After officially opened by BG Gatot, the medical services begin. For a small island, the patient number were overwhelming with 1334 patients, 7 of them being operated from such cases like lipoma and labioschisis. The operated patients done in the ship and usually only take a day for post operative care and they will be send home on 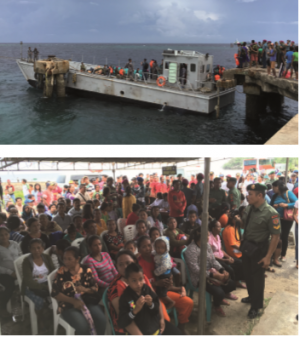 the next island that the ship will go. The transportation of the patient to their home was taking cared by local government.

The next morning the KRI SHS 990 arrived at Kisar island shore. Kisar is an island of Southwest Maluku and the team beached on Pantai Nama harbor. Hundreds of patients waited since morning, some of them were students who mostly suffered an ENT problems like middle ear infections, ear plugs, tonsillitis and skin diseases like bacterial infection, scabies and fungal diseases. They were accompanied by their teacher maybe because some of them were afraid to met doctors. The total patients were 1041 and none of them sent to operated in hospital ship.

Wetar island is the next and biggest island the team visited. The place was Hiai village at the south side of the island which less populations and infrastructure than the north. The medical service was done in the elementary school near the harbor because the public health center was too far. There was no doctor at that village and the public health center only run by nurses. When the team arrived there were a diarrhea epidemic and the pediatrician, Ltc Rahmanto MD, was sent to the public health center to examine and gave further medications. Some medications then left to help the center. Only 423 patients treated and one patient will be operated at dr Ramelan Naval Hospital at Surabaya because he suffered a malignant bone cancer and will be amputated. 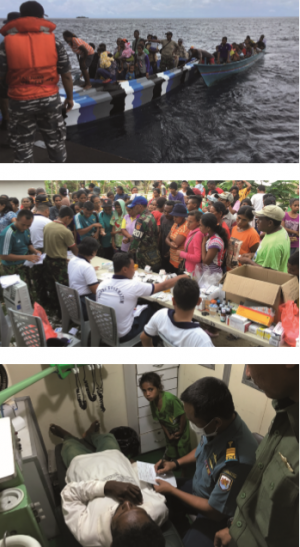 Peoples from Lirang island reached and served at the hospital ship

The last journey was a Lirang island, southwest of Wetar. It’s a small island stretched from north to south surrounded by a coral beach which makes the ship cannot reach the beach. So this time the patients were sent by fisherman and naval post boats to the hospital ship through its stern door which was opened for docking.One of the boat had an engine troubled and the passengers rescued and transferred to KAL Weling, a rescue ship from Kupang Main Naval Base. The medical service conducted in deck A, a cargo bay at the lowest deck while some patients being referred and operated at operation room at deck C. Nine patients being operated and 348 patient treated by doctor and dentist. The dental problem patients served in clino-mobile, a mobile dental unit, in deck A. This last island patients look more suffered than the other island the team visited. Most of them had a suspected tuberculosis, malnutrition and skin diseases. It’s because of their poor hygiene and nutrition, not mention of the lack of medical facilities. A pack of medicine was left to the naval post to be used by public health center.

Finally the journey almost completed and the team had their back home sailing to Surabaya for another four days. It was a remarkable and unforgettable experienced to visit some islands which really need a medical attention and hopefully we could enhance the quality of life of the peoples. The team also mapped the geo-medic data to be use in the future. It only a beginning, after this mission the surgeon general office will made programs which involved three branches of the armed forces to continuously gave a medical assistance especially to remote island and at the border side. Because when the peoples are in health condition so the nation and that will be TNI main duty in medical field. Together with the peoples TNI will be stronger.

Chief of Medical of the Air Force Command I, Jakarta Indonesia