Use of Extracorporeal Lung Support Systems for the Treatment of Severe Gas Exchange Disorders: An Option for Missions?

To put it simply, among the elements of the respiratory system pulmonary and extrapulmonary portions can be differentiated. Disorders of either portion as well as combination of disorders of both can lead to acute respiratory failure.

A wide variety of events, direct as well as indirect lung affections, may precipitate acute respiratory failure. Examples of the diverse triggers are shown in Table 1.

Acute respiratory failure is classified into three types. These are shown in Table 2. 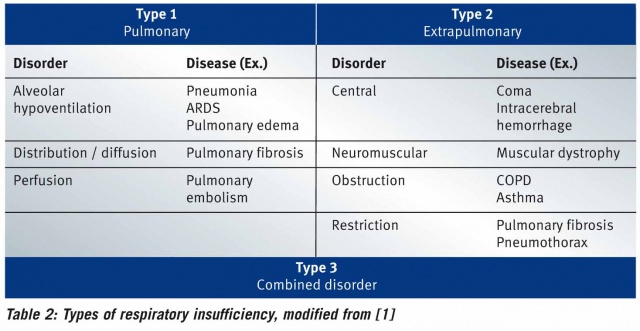 In type 1, hypoxemia is dominant, since here the lung parenchyma is damaged. In type 2, hypercapnic respiratory failure, the respiratory pump is disturbed, while type 3 is a combination of the disorders of type 1 and 2, which is very frequently encountered in clinical practice [1].

The further differentiation of acute lung failure of types 1 and 3 is based on the Berlin Definition published in 2012 and classifies the condition by severity into one of three categories [2]. Here the decisive factor is the oxygenation index (PaO2 / FiO2) as a measure of the severity of the gas exchange disorder in terms of oxygen uptake. A PEEP1 of 5 cm H2O (0.49 kPa) must not be undercut in the assessment according to the Berlin Definition. For details, see Table 3. 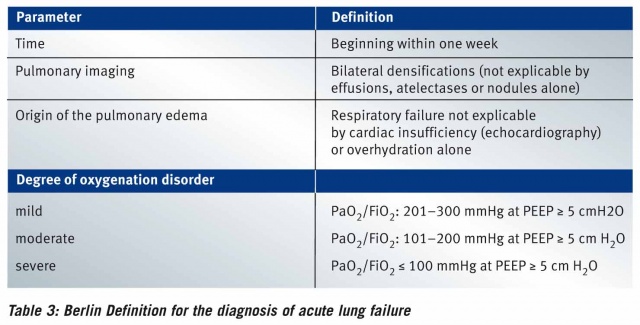 Acute lung failure is one of the most important conditions in intensive care [3].

In the interest of clarity, the present work primarily addresses ventilation treatment and its possible complications, and focuses on the use of the Interventional Lung Assist without depreciating the importance of the other mainstays.

Patients with acute lung failure regularly require mechanical ventilation. In case of invasive ventilation, an artificial airway, initially via orotracheal intubation, and over the further course of treatment often also via a tracheostomy tube, e.g. after percutaneous dilation tracheotomy, is created.

According to the recommendations of the ARDS Network, the level of the PEEP to be applied is based on the required inspiratory oxygen concentration. The internationally recognized target tidal volume for patients is 6 ml / kg of body weight [4]. Here the reference is the ideal body weight, which may differ strongly from the actual body weight [5].

Recent studies suggest, however, that the above recommendation provides only an initial indication for ventilation adjustment. Individualized determination of “best PEEP” is indispensable in the intensive care context [1].

In the course of ventilation treatment, it is generally recommended to limit the peak pressure to ≤ 30 cm H2O (2.94 kPa).

Especially against the background of ventilator-associated lung injury (see below), the respirator should be set to a low pressure amplitude (ΔP).

When these ventilation settings are used, in many cases respiratory acidoses occur, which are not metabolically compensated promptly. It is not fully understood down to what pH such respiratory acidosis can be tolerated. Currently a pH ≥ 7.2 is considered the target. In this context, the concept of permissive hypercapnia is often referred to. In the author’s opinion, bedside echocardiography is an important complementary monitoring method, allowing early detection of the effects of acidosis-related resistance in­creases in the pulmonary circulation on the right ventricle.

In barotrauma, high transpulmonary pressure (alveolar pressure minus pleural pressure) leads to pressure-related damage to the lungs and interstitial tissue, with the possible consequences of e.g. pneumothorax or pneumomediastinum.

In atelectotrauma, the damage results from the rapid succession of recruitment and derecruitment of the lower respiratory tract. Opening requires relatively high forces and causes shear stress with the result of epithelial tearing.

High shear forces within the alveoli result in a local inflammatory reaction, known as biotrauma, at the boundary between ventilated and collapsed alveoli.

The sicker the lungs, the lower the tidal volume to be applied!

This can be formulated as a resultant of the above. Persistent hypoxemia / hypercapnia despite optimized respirator settings can endanger the patient. Here use of extracorporeal support systems might offer a possible solution. In one study, these effects were examined [6]. This showed that in the group of patients with severe respiratory failure the combination of extracorporeal lung support and ultra-protective ventilation (tidal volume 3–4 ml / kg body weight) led to a higher proportion of ventilation-free days. 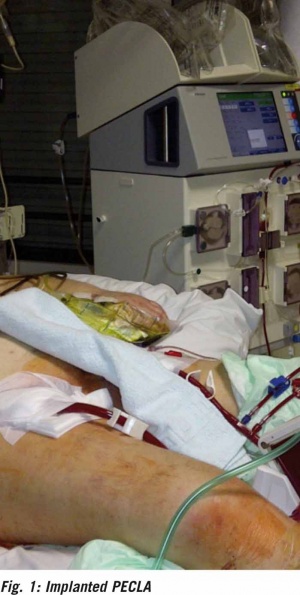 In the ICU of the Federal Military Hospital Berlin, the lung support system Interventional Lung Assist (iLA) by the manufacturer Novalung has been regularly used since 2008. Initially exclusively as a so-called PECLA (pumpless extracorporeal lung assist) device. Here, the femoral artery and vein are each supplied with a special cannula, and the systemic arterial blood pressure is the decisive parameter for the resulting blood flow across the membrane. Here blood flows between 0.8 and 1.5 l/ min can be achieved.

Since 2015, in the specialist department we have been using the pump-driven advanced version of the membrane ventilator, the iLA activve. Depending on the cannulas used, here considerably higher blood flows can be generated. Only large veins are punctured, and the blood flow is established by a special pump. The basic element of both systems is the membrane. This can be further varied in size using the iLA activve console. The higher the attainable blood flow, the better the oxygenation support for the treated patients. As seen in Figures 1 and 2, both the pumpless and the pump-driven system can be combined with renal replacement therapy without additional vessels requiring to be cannulated.

Function Description of the Membrane Ventilator (Information by the Manufacturer)

The iLA Membrane Ventilator is a lung support system that allows exchange of carbon dioxide and oxygen by diffusion through a tight membrane of polymethylpentene (PMP). All blood contact areas of the iLA Membrane Ventilator are provided with the Novalung Coating. This coating forms a bioactive, stable, biocompatible and non-thrombogenic surface. Components of this coating comprise high-molecular-weight heparin that is covalently and ionically bound to immobilized polypeptides. The iLA Membrane Ventilator comprises a gas exchange membrane whose arrangement allows extremely low resistance on the blood side. The membrane consists of hollow fibers which are woven together to form mats. The mats are arranged at mutually orthogonal angles to optimize the blood-membrane contact. Blood flows around the hollow fibers, while gas passes through them. Gas exchange through the hollow fiber walls takes place due to the permeability for gases. The driving forces are the partial pressure differences of carbon dioxide and oxygen in the blood and in the gas phase. The leakage-tight fibers allow very long operating times without plasma escaping from the blood into the gas phase. 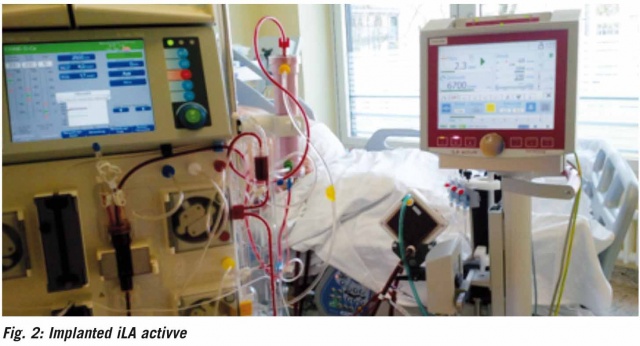 Typical Treatment Indications for Use of the Membrane ­Ventilator

The most common treatment indications for use of the membrane ventilator in the ICU of the Federal Military Hospital Berlin include hypercapnic respiratory failure and the early phase of hypoxic respiratory failure of various etiologies (Table 1). We have achieved very good treatment results also in the treatment of large bronchopleural fistulas, e.g. after thoracic surgery, by supporting use of the membrane ventilator.

Organizational Measures ­Relating to Use of the ­Membrane Ventilator

Membrane ventilator therapy is mapped by a corresponding SOP (Standard Operating Procedure) for the ICU. Several medical colleagues have attended training courses at the Novalung Academy. For the entire team, several instruction events have been and are going to be held. The company Novalung conducted a clinical iLA workshop for the staff of the ICU. Furthermore, the manufacturer’s excellent clinical support (24/7) is to be emphasized. Further information is downloadable from the internet platform www.xenios-campus.com.

In the context of the extended task spectrum of the German military, during armed conflicts and / or after terrorist aggressions there are also wounded persons with lung conditions (blast lung injury) to be treated by the medical service of the Federal Military. However, the increase in terrorist acts in Central Europe also increases the likelihood that in the Federal Military hospitals increased numbers of patients who have suffered explosion traumata will have to be treated as well.

Blast lung injury is one of the primary consequences of explosion trauma. For survivors, the pathophysiological change in the lungs caused by the blast wave of the explosion is decisive. It is a complex pulmonary trauma that manifests directly as lung failure within the meaning of ARDS2. This explosion trauma-induced ARDS is the most common cause of secondary decease of those affected [7,8].

Consequences for Treatment of the Wounded in the Medical Facilities

Treatment of the wounded in the medical facilities of the Federal Military follows standardized workflows, inter alia according to the principles of ATLS3  and DCS4 . These principles are not addressed in the present work. For further intensive-medical stabilization with the aim of making the patient transportable, therapy of the ARDS according to the current standards is among the crucial factors for the outcome. A relevant factor for treatment is the increased incidence of combined injuries, which often include head injuries in addition to the lung damage. The concept of permissive hypercapnia for ventilation treatment during respiratory failure can have fatal effects on intracranial pressure in case of craniocerebral trauma. Reduction of ventilator-associated lung injury in blast lung patients is also in the focus of the practitioners. Widespread stockpiling of extracorporeal assist systems in the theaters of operation is, however, impractical for obvious reasons.

In the civil sector, it has been found expedient to have patients with acute lung failure, who are to be transferred to an ARDS center, connected to a mobile lung support unit by specialists from ARDS centers while they are still in the referring hospital. This approach increases patient safety during transport and shortens the time to the beginning of this effective therapy.

Possibly, this approach can also be adapted to medical transfers from the theaters of operation to Germany for the medical service of the Federal Military. Here the advantage particularly of the PECLA consists in the very compact design and easy control. Thus, specialized teams from the Federal Military hospitals could carry along the necessary equipment during STRATAIRMEDEVAC operations5  and connect the wounded to the lung support system in the country of deployment. The implantation proper is not very time-consuming, and the therapeutic effect can be monitored easily by means of arterial blood gas analyses. Thus (ultra-)protective ventilation would be possible already during the transfer, which may sometimes take several hours. Retrofitting in the aircraft, e.g. for transport securing systems, is not required when using the PECLA. The membrane ventilator can be fixed between the thighs. The oxygen supply can easily be generated at the patient transport unit. For wounded US soldiers, this concept has already been successfully implemented [9]. The quality of treatment can thus be further increased [10].