Summary
Over the past ten years, the introduction of targeted therapy has led to dramatic changes in the treatment of metastatic clear-cell renal cell carcinoma (mRCC). For the first time, new substances have been able to demonstrate an advantage in overall survival, while others show promising results in combination therapy.
This article provides an overview of all substances currently available, a rationale of their use in clinical practice and, based on drug approval studies, an insight into their mechanisms of action and effectiveness as well as their possible use in sequenced therapy.
Keywords: clear-cell renal cell carcinoma, targeted drugs, tyrosine kinase inhibitors, mTOR inhibitors, checkpoint inhibitors, sequencing treatment

With about 15,000 new cases in 2013, renal cell carcinoma (RCC) ranks seventh among all cancers in terms of incidence in Germany [22]. At the time of initial diagnosis, metastases are found in 25 to 30% of patients [7]. A further 20 to 30% experience a relapse after nephrectomy, mostly within the first three years [1].

The share of renal cell carcinoma in all cancer deaths is 2.6% for men and 2.1% for women. In Germany, 5,247 people (3,096 men and 2,151 women) died of a malignant kidney tumour in 2010 [22]. In spite of the great progress made over the last 10 years using targeted substances against vascular endothelial growth factor (VEGF) and mammalian target of rapamycin (mTOR), the majority of patients will develop resistances against VEGF- and mTOR-targeted therapeutic agents. New strategies are needed to overcome resistances and to achieve long-term remission.

The urology departments of the Bundeswehr hospitals provide not only surgical expertise (preserving organ function, minimally invasive methods), but also face the current challenge of this innovative tumour pharmacotherapy.

In order to perform a best-evidence synthesis, we searched PubMed for the keyword "metastatic renal cell carcinoma" with a focus on reviews published in 2017. We excluded, among others, non-randomised studies, case reports, studies with a negative result as well as articles on substances that we personally verified were not approved by the European Medicines Agency. The guidelines of the European Association of Urology (EAU), of the European Society for Medical Oncology (ESMO) and the German S3 medical guideline as well as the relevant references were included.

A search for the term "metastatic renal cell carcinoma" produced a total of 13,919 results published between 1946 and 12 April 2017. We identified ten studies that met the criteria and led to the examined substances being approved in Europe. Table 1 shows the relevant results. The guidelines of the EAU, of the ESMO and the German S3 medical guideline included 396, 54 and 703 references to the literature, respectively. We further found one review published in 2017.

Table 1: Summary of the results of the drug approval studies

Figure 1: Cellular points of attack in the targeted treatment of mRCC [6]. Mechanisms of action 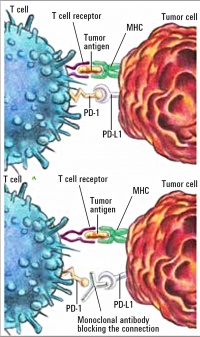 Figure 2: Mechanism of action of Nivolumab as checkpoint inhibitor [19]: PD-1 on the T cell binds to PD-L1 on the tumour cell, thus inactivating the T cell (above). Nivolumab (monoclonal antibody) prevents binding of PD-1 to PD-L1 (below).

The VEGF antibody bevacizumab in combination with IFN binds to VEGF so that activation of the VEGF receptor is no longer possible.

All mentioned targeted drugs inhibit angiogenesis by inhibiting signal transduction in the tumour cell. As the existing tumour blood vessels recede and new vessels cannot develop, the tumour is supplied with less oxygen. This stops tumour growth and can even lead to necrosis of the cell. Figure 1 illustrates the different modes of action of the drugs described above.

As a so-called checkpoint inhibitor, nivolumab binds to the programmed death (PD) receptors on T cells to stop interaction with the ligands PD-L1 and PD-L2, which are expressed by the tumour cells and which otherwise protect the tumour cell against an immune response. Nivolumab thus causes the destruction of tumour cells through activation and proliferation of T cells (Figure 2 below).

With the introduction of targeted drugs, enormous progress has been made in the treatment of metastatic clear cell renal carcinoma (mRCC) over the past 10 years. Since 1985, unspecific immunotherapeutics had been used to treat this tumour that is neither chemo-sensitive nor hormone- or radio-sensitive. This group includes cytokines interferon-⍺ (IFN) and interleukin-2 [18]. Only patients with a good risk profile, however, profited from this therapy, which also involved a wide range of adverse effects [12].

Likewise, not all patients can profit from targeted therapy. In 2009 and 2013, HENG et al. were able to categorise subgroups characterised by very different prognoses. This led to the establishment of the Heng Scores (IMDC risk factors), which replaced the Motzer Criteria (Tables 2 and 3) [8].

Table 3: Risk groups based on IMDC risk factors and prognosis [8]

Especially patients in the intermediate or poor risk groups had poor survival results even in the TKI era. This makes sense in light of the results of approval studies in which only temsirolimus was able to generate a survival advantage, and only for patients of the poor risk group.

All other tyrosine kinase inhibitors and antibodies may improve progression-free survival but not overall survival. Two targeted drugs introduced in 2016 were the first to be able to demonstrate improved overall survival, leading to cabozantinib and nivolumab being approved for second-line therapy. In a subgroup analysis, both substances showed significant advantages over everolimus even in a poor risk situation with osseous or visceral metastases [13]. Another subgroup analysis revealed pre-treatment to have a significant influence on results: nivolumab after pazopanib and cabozantinib after sunitinib achieved significantly better results than vice versa [13].

Across all risk groups, combination therapies are rarely used because of the lack benefit and the high rate of adverse effects [10]. Only bevacizumab with IFN as well as lenvatinib with everolimus are considered established combinations.In case of progression, recourse to second-line treatment, then third-line treatment is possible (so-called sequencing of treatment). The choice of drugs in that case depends on pre-treatment (Figure 3).

Throughout systemic therapy, assessments should be performed to see if the tumour responds to treatment. Since prospective data about the best time for such assessment are unavailable, cross-sectional images should be taken every 6–12 weeks to assess progression, much like during drug approval trials [10].

Since the mechanisms of action of targeted drugs are completely different from classic chemotherapy, the attending physician faces new challenges when typical adverse effects occur (Table 4). It is vital to quickly identify these adverse effects as such and transfer patients to a facility that can provide oncological expertise, which for soldiers, as a rule, is the urology department of a Bundeswehr Hospital. Symptomatic therapy is usually enough to treat mild to moderate adverse effects. If adverse effects are severe, possible approaches are to interrupt therapy, reduce doses or modify the regimen.

Table 4: The 5 most common adverse effects of targeted drugs (according to drug information) 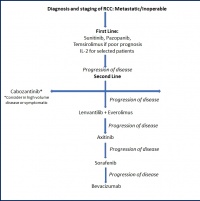 Figure 4: Further development of sequenced therapy of mRCC on the basis (modified from [13]) Conclusions

Thanks to the further development from unspecific to targeted drugs, pharmacotherapy of metastatic renal cell carcinoma has over the last ten years improved the quality of life as well as progression-free and, since the development and introduction of new substances, even overall survival rates of patients.

With the current German S3 medical guideline for diagnosis, therapy and follow-up care of renal cell carcinoma (published September 2015, revised in April 2017) and the guidelines of the EAU and the ESMO, which were updated in 2016, there are three equivalent guidelines that differ in merely a few details (figure 4).

Conflict of interest:
In 2016, Dr Biermann was paid a fee by Novartis for her participation in an advisory board.