Even three months after the devastating earthquake in Haiti, large scale and continuing international aid for the ordinary citizens of Haiti had still to arrive. The frontline medical support that was rapidly deployed within a few weeks of the disaster had already been withdrawn, and the Haitians had been left to face a deteriorating situation with regard to public health on their own, apart from the limited support provided by NGOs.

Amongst the 300,000 casualties are 4000 amputees and many others who require continuing treatment for fractures yet to be stabilised, plastic surgery and extensive convalescence. Founded over 50 years ago and funded by a US foundation, the Hôpital Albert Schweitzer still plays a pioneering role in this area.

See issue 2./4-2010 MCIF for a detailed report, in words and images, of my experiences as an emergency physician working for the Swiss Agency for Cooperation and Development (SDC) in Port-au-Prince from day 5 after the earthquake. Three months later, I returned to the Hôpital Albert Schweitzer in Haiti to provide voluntary help for several weeks as a trauma surgeon. 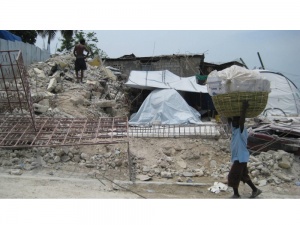 When I arrived in Port-au-Prince, everything seemed to be largely as it was when I had left. One difference was that the rainy season had now set in, exposing a population that was still largely without proper shelter to further dangers. The vegetation had become more lush and green and the fact that small pathways had been created through the debris evidenced there had been some effort to remove the rubble. Extra tarpaulins had been erected to protect the tents against the downpour and, all in all, the immediate environment seemed to be rather better organised with earth latrines provided on densely populated sites, but everyday life was still dominated by the stench and the scenes of widespread destruction.

After my 3 - 4 hour bus ride to the Hôpital Albert Schweitzer (www.hashaiti.org), located in an isolated part of the northern interior, I was confronted by the sight of the numerous emergency tents erected for refugees scattered across the hillsides around the town. In one location, a model refugee camp consisting of prefabricated houses had been set up. 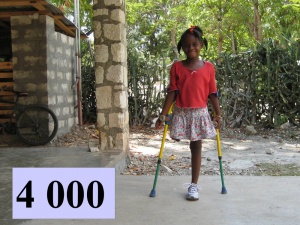 This community health care facility was originally founded by an American couple, Larry and Gwen Mellon, in the 1950s. In its time, it was a progressive enough concept and, although the hospital is now somewhat outdated, it had the good fortune to be completely spared by the earthquake. However, this did mean that in addition to its routine health care provision for the local population, it had had to take in a further 1500 earthquake victims in January who had been evacuated here from the capital. It had only coped with the help of volunteer surgical teams - mainly from the USA and Canada, but also from Switzerland - deployed there for periods of 1 - 3 weeks. This rapid rate of turnover does create problems, but the system at least allows the facility to obtain the services of appropriately qualified and motivated personnel - who are only available when on leave because of professional commitments in their home countries.

The director of the facility, and thus the person responsible for planning the deployment of the surgical teams, is Dr. Rolf Maibach, a retired paediatrician from Ilanz in Switzerland. He and the hospital also receive support from the NGO “Bünder Partnership Hôpital Albert Schweizer Haiti” (www.hopitalalbertschweitzer.org).

The initial large-scale international on-site medical support was withdrawn after 5-7 weeks and the already severely depleted local health care system - if ‘system’ is the right word for what remained - was left alone to cope with all the victims that the earthquake had left in its wake. Among these were 4000 amputees, a number far beyond the capacity of any available rehabilitation facilities.

But the Hôpital Albert Schweitzer proved to be more than capable of dealing with the situation. It had obtained a commitment from the largest US prosthesis manufacturer to send four prosthesis constructors to train four Haitians here over the near future, while all the costs of the prostheses required were to be covered by a private US foundation.

Volunteer physiotherapists from around the world are on hand to ensure that once they have been issued with their prostheses, the amputation victims can be appropriately remobilised, while the prosthesis builders can make any necessary adjustments. This small but highly motivated team of closely collaborating specialists also includes orthopaedic surgeons who can revise amputations. 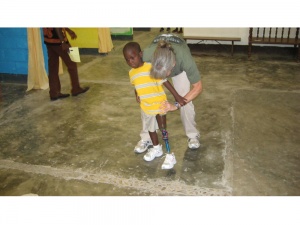 Up to forty prostheses - both arm and leg prostheses - are supplied and fitted every week. Haiti now probably has the most efficiently functioning prosthesis production line in the western world; perhaps its closest rival is China. Despite this, it will still take more than 2 years to supply every one of the 4000 amputees with a prosthesis, not to mention the time that will be required to maintain and adjust these. As a result of emergency amputations, many stumps are not optimally formed, while there is also the problem of the provision of aftercare. This means that it is only possible to use the simplest forms of prosthesis that can be attached to the body by straps  rather than the limb prostheses with vacuum sockets that are already available worldwide through the ICRC.

Further support had also been provided by the Balgrist Hospital in Zurich, which sent a team consisting of an orthopaedic medical technician, an orthopaedic surgeon and a physiotherapist to the Hôpital Albert Schweizer for several weeks early this summer.

While the frantic bustle of emergency treatment went on in the background, the hospital was still filled with many patients bearing the evidence of the injuries sustained three months previously. Among these was a 7-year-old boy with a cranial trauma who had lost his right eye and who was suffering from post-traumatic Volkmann’s contracture of the right arm and fibrosis of the peroneal muscles as a result of being buried in the ruins, but who would happily play football for hours with his relatives and even made attempts to draw. He is just one example of the many victims who have developed muscular fibrosis because of being trapped under fallen rubble. 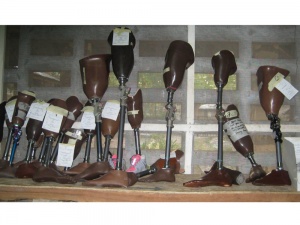 The rehabilitation of such patients is a long and complex process. A technique involving repeated muscular extension under anaesthesia with open excision of the worst of the fibrotic tissue and the fitting of splints that are gradually extended over a period of weeks is employed in order to help victims at least regain some of the physiological functioning of their limbs).

The limited emergency wound care that was available in the first few days after the earthquake and the lack of time and funds meant that it had not been possible to complete the treatment of many patients. One such case I encountered was that of young woman who had suffered a major injury to her upper lip (in addition to other earthquake-related injuries). The primary muscle sutures had been left in place so that she was unable to close her mouth properly, resulting in continuous escape of saliva. A simple and brief scar revision procedure under local anaesthesia, with careful adaptation of the orbicular oral muscle, resulted in a satisfactory functional and cosmetic outcome that significantly helped restore her self-esteem.

In view of the large number of cases, external fixation was the method of choice used for the stabilisation of all closed and open fractures - as soon as the material became available, could be sterilised and the patients had a place to lay their heads….

But even this procedure is associated with considerable risk. Poor hygiene, lack of aftercare and the associated deficiencies in patient compliance mean that there is the possibility that infection of pin tracts or of open fracture wounds can undermine the outcome. Continued stabilisation can become impossible due to the development of infected, atrophying, non-healing pseudoarthrosis, while infection can result in loosening of Steinmann pins.

Under these conditions, plate and intermedullary pin osteosynthesis are particularly problematic because of the high risk of infection and the lack of adequate materials. The large number of fracture cases requiring treatment meant that in some cases osteosynthesis material of insufficient size or otherwise unsuitable had to be used.

One young woman had an implant that was too small, so that both plate and screws had fractured. We attempted to salvage the situation without extensive intervention by fitting her with a Sarmiento femoral brace constructed by our orthopaedic technician. The basic need was to ensure that the system was well bonded together and that the periosteum was stable enough to protect the femur against shearing forces.

At present, the medical outlook for Haiti is bleak, particularly in view of the fact that this recent and dramatic catastrophe has increased the rate of emigration of academically qualified Haitians to the USA and Canada.

Although without any doubt the NGOs are there with the best of intentions, their medical facilities (often manned by highly-paid non-Haitians), are attracting patients away from the remaining local healthcare amenities and are competing with Haitian doctors, who are experiencing significant financial losses as a result.

Haiti is a country that is regularly ravaged by earthquakes, floods and hurricanes and the chances are that the next natural disaster is only just around the corner. Added to this is the fact that this is a country with a political and economic infrastructure that has been volatile for decades and that is being placed under immense strain as a result of this crisis.