Impressions of an impressing event 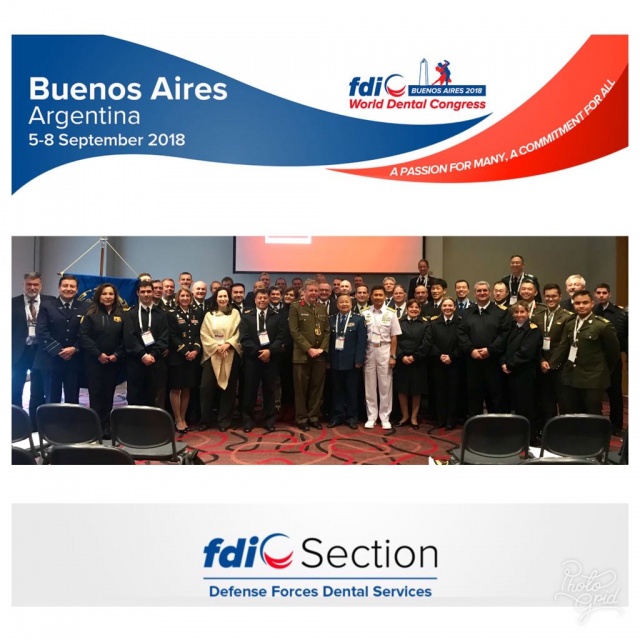 From September 3rd to 5th, more than 60 members of the Section of Defence Forces Dental Services (SDFDS) came together for their annual meeting. The SDFDS is a section of the Fédération Dentaire Internationale (FDI), the principal representative body of more than one million dentists worldwide, which develops health policy and continuing education programmes, speaks as a unified voice for dentistry in international advocacy and supports approximately 195 member associations in 130 countries in global oral health promotion activities.

The meeting started Sunday evening with the traditional get-together. It was the reunion of long-time friends, the get-to-know of colleagues participating for the first time and first professional conversations, underlined by Argentinean wine and food.

Monday and Wednesday displayed the scientific part of the meeting with altogether 18 lectures. The themes ranged from dentistry before and during deployments or disaster management over forensic odontology, to periodontology, robots in implantology and maxillofacial surgery. The lectures showed the wide range of dentistry in armed forces and the tasks of military dentists. Other highlights included the presentation of the film "Cell-to-cell communication - Peri-Implantitis and its Prevention" by Quintessence Publishing.

Tuesday was a day of exploration into the culture of Argentinia: A guided bus tour showed us the beauty of Buenos Aires with its magnificent buildings from the midst of the 19th century. The “Paris of South America” has more theatres than any other city in the world and with the Teatro Colón one of the most famous opera houses. The parks, the museums and of course the cemetery of Recoleta with the tomb of Evita Perron are worth a journey to Buenos Aires. It was also a day for collegial exchanges in a relaxed setting.

The SDFDS meeting ended on Thursday with the visit of the Hospital Naval Central. The participating dental officers were not only shown the dental but also all the other departments so that they could get a good impression of the quality of medical care that the Argentinean soldiers and their relatives are receiving.

At the end of the scientific meeting, Capt (N) Dr. Bieber, the senior dental officer of the Bundeswehr, took over the chairmanship of SDFDS as the first German dental officer. He underlined the fundamental importance of the SDFDS and its indispensability as part of the FDI.

Wednesday evening the FDI Congress commenced with the opening ceremony and the participating dentists had three highly interesting scientific days with lecturers from all over the world.

During the stay in Buenos Aires the author and his wife didn’t miss the huge flea market, which takes places every Sunday in the San Telmo area. When you stay in the capital of tango you must see a tango show with great musicians, dancers and singers. And if you have enough time, go on the Rio de la Plata for a beautiful trip through the Tigre Delta and if you are as lucky as we were, you will see why the Rio de la Plata got his name: Silvery gleaming in the sun.