The links of the land-based evacuation chain

Even in the very earliest days of the provision of medical support in the field, it was generally recognised that casualty evacuation was a fundamental requirement in view of the fact that it is the time factor that determines whether the life and health of a casualty can be successfully preserved. Air transport plays a significant role in the current ISAF mission and nearly 95% of all casualties are evacuated by air. However, certain conditions must be met if this mode of casualty transport is to be used, and the conditions are not always appropriate: weather, visibility and the activity of the enemy are factors that can preclude the use of aircraft. For this reason, land-based transport of casualties will continue to be of importance.

The history and development of German casualty transport

A first milestone in the history of armoured casualty transport was reached in 1942/43, when the then German armed forces  began to employ the SdKfz 251/8 half-track vehicle manufactured by Hanomag for this purpose. The vehicle was adopted for use within the armoured divisions (Panzerdivisionen). They were generally assigned to the headquarters companies of the various regiments and then allocated to the individual field companies as required. Interestingly, there are close parallels with the way the corresponding vehicles are being used during the current ISAF mission; those deployed on the Eastern Front were also equipped with machine guns and did not bear symbols identifying them as medical vehicles as they frequently came under fire anyway. In contrast, the medical vehicles at the Western Front used to be unarmed and marked with the Red Cross. 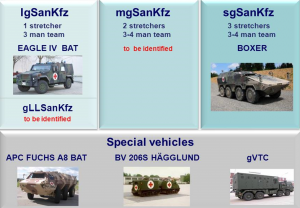 With the end of the Second World War and the formation of the Bundeswehr, new structures and vehicles (generally of U.S. origin) were introduced. The first vehicle used for casualty transport was the ‘Hotchkiss’ light tank. Following the subsequent restructuring and full mechanisation of the German land forces, the M-113 armoured personnel carrier was employed for casualty transport. However, this vehicle was unable to compete, in terms of manoeuvrability, with the technologically updated and reworked versions of the Main Battle Tank (MBT) LEOPARD II and the  mechanised infantry combat vehicle (MICV) MARDER and the consequence was that medical teams were unable to follow the field units into combat. The first foreign deployments in which the German armed forces participated, particularly UNOSOM in Somalia in 1993/94, revealed the existing deficiencies when it came to casualty transport. As a result, it was decided to fall back on the tried-and-tested FUCHS armoured personnel carrier (APC) as an alternative and this was fitted with the necessary medical equipment. Today, this vehicle still represents the backbone of the Bundeswehr armoured casualty transport system.

Experience gained during deployments led to further requirements being drawn up with differing weighting being placed on the following five factors:

Challenges faced by the current military medical services in the field

The Bundeswehr Joint Medical Service has as its fundamental guideline the maxim that the quality of outcome of treatment must be equivalent to that which it would be possible to achieve in Germany. At the same time, there is a wide range of potential challenges facing medical personnel active in the field:

The vehicles currently in use, namely the FUCHS, the BV 206 HÄGGLUND and the armoured casualty transport container (gVTC) are used as special vehicles in specific situations, and do not fit within the definitions of the three main classes outlined above.

Another principle underlying the new concept is that the medical equipment used by all armoured land-based casualty transport vehicles should be standardised. Previously, the equipment supplied to a paramedic team (Sanitätstrupp) and a mobile emergency physician team (MEPT; DEU: Beweglicher Arzttrupp( BAT)) differed. This situation has been amended, so that all armoured medical transport vehicles are now equipped to the BAT level.

Therefore, the question of which role (paramedic team or MEPT) an armoured medical transport vehicle should play will thus in future solely be determined by the qualifications of the team manning it.

Depending on deployment situation and availability, the Bundeswehr employed the following medical vehicles in the Balkans (KFOR) and in Afghanistan (ISAF): the EAGLE IV BAT, the YAK BAT and the armoured personnel carrier (APC) FUCHS BAT.

Following their introduction, all vehicles have been continually adapted to the existing threat level in the corresponding theatre of operations. Hence the APC Fuchs weighed some 15 tonnes in its original A4 BAT version. Following upgrades and improvement of the quality of anti-ballistic protection, the current version (A8A2 IED) now weighs roughly 22 tonnes. The installed equipment has also been improved to adapt it to the IED threat, so that in the most recent version it is now an almost completely newvehicle.

This, perhaps unsurprisingly, is associated with complications and difficulties in the area of crew training that have yet to be overcome.

Also, drivers of the military medical services need to be taught to operate all three types of those vehicles. The trainee drivers require considerable technical skills while suitable training facilities and instruction personnel need to be provided. It is also essential to ensure that the medical team is integrated in the combat unit it is to support within the phase of preparation for deployment. The crew of an armoured medical transport vehicle must be aware of the mission directives of the combat unit and, in order to become a homogeneous element within this unit,  it is crucial that they  participate in the time-consuming exercises at regional training centres, firing ranges and the combat practice facilities of the armed forces, resulting in their absence from active duty for longer periods of time.

Experiences gained from deployment outside Germany, particularly as part of the ISAF mission, have made the following clear: it is necessary that the level of protection provided to medical transport vehicles must be equivalent to that provided to combat and combat-support vehicles, while mobility and command capability must be largely identical to that of the unit being supported.

Due to the escalation in the threat level being faced by ISAF Regional Command North (RC (N)) in 2008 to 2010, it has also become apparent that the requirement for armoured casualty transport vehicles is greater than had been originally assumed.

It can be the case that the medical transport vehicles assigned to support a particular combat unit do not have the same level of armour or mobility as their combat counterparts. Hence, an armoured infantry unit using the MICV MARDER must be supported, at the least, by a medical team supplied with the APC FUCHS BAT. Although the latter has a similar level of protection, it does not have the same mobility as the combat vehicle. An EAGLE IV BAT can be employed for the support of a unit using light patrol vehicles, but its patient capacity and its options for providing treatment during transport are very limited.

The experience gained by the Bundeswehr in complex battle and combat situations has demonstrated time and again that the fundamental requirement is to have the capacity to evacuate a number of casualties under protected conditions as rapidly as possible. Fortunately, air evacuation transport has been regularly available to offset the limited transport capacity of the armoured land-based medical transport vehicle fleet.

In the form of the heavily armoured medical transport vehicle BOXER, the Bundeswehr finally has a vehicle that is eminently suitable for primary casualty transport when in support of armoured combat units. The sgSanKfz in question provides an excellent level of protection and is thus the appropriate support vehicle for mechanised companies. It is also sufficiently mobile to follow the latest combat vehicles, such as the MBT LEOPARD II and the MICVs MARDER and PUMA when these enter difficult terrain.

In addition, the equipment module has been designed so that different versions can be used in accordance with requirements. The sgSanKfz can be rapidly re-equipped by its crew to accommodate three stretcher cases or to provide seating for seven walking wounded. The sgSanKfz is thus universally adaptable to the individual situation (it can also be modified to accommodate an intensive care stretcher case). The modular concept of the vehicle means that it also has an enormous potential for future upgrading.

With regard to command capability, the sgSanKfz has VHF radio and data relay systems, meaning that it can link up with the C2 and information systems of the combat units and the German Medical Command and Information System (SAFES). In addition to its VHF communication equipment, the sgSanKfz also has an integrated satellite communication system and sat nav system.

In conclusion, the new sgSanKfz BOXER conforms to the requirements of armoured casualty transport to a previously unattained extent. As a result, the Bundeswehr Joint Medical Service now has a completely new dimension of medical vehicle at its disposal.

On completion of extensive operational testing, the new vehicle has currently been employed during the ISAF mission.