Untreated advanced periodontal disease is a main reason for the development of dental emergencies and sick call during deployments. The purpose of this study was to compare the effect of a postgraduate periodontal training on the quantity of periodontal treatment and prevention.

Periodontitis, meanwhile being the most common dental disorder responsible for the biggest part of tooth loss until the age of 65, has come to the fore of treatment needs in Germany. The purpose of this study was to compare the effect of a postgraduate periodontal training program of 148 continuing education (CE) hours on the quantity of periodontal treatment and prevention. 37.5 % of the participating military dentists finished the curriculum program successfully over the period of three years. The graduates extended their baseline number of annual systematic periodontal treatments three fold. The known professional capability shortfalls in the field of periodontology could be reduced.

Today, critical soldiers estimate the impact of periodontal diseases on the daily life and the operational capability higher than 25 years ago. Patients with periodontal disease have worse oral health-related quality of life than healthy patients. This impact can be partly ameliorated by periodontal treatment with 24h root surface debridement (Jowett et al 2009). The most important aim of the dental services of a modern, mission oriented army in the home country is the identification and a fast treatment of high risk patients. By the obligatory annual mission-related dental-fitness-checkup, the German Armed Forces (GE AF) contribute to these not civilly represented clinical diagnostics, for example as part of the determination of the capacity for a deployment abroad.

Since the end of the 1980s, a significant and pleasant reduction of caries has occurred in the civil sector due to voluntary examinations in the early childhood, dental care in the kindergarten, promotion and distribution of fluoridated toothpaste and interdental space cleaning with dental floss and interdental brushes as well as the introduction of free individual-preventive services for children and adolescents. Being the most common dental disorder, the periodontitis, that is meanwhile responsible for the biggest part of tooth loss till the age of 65, comes to the fore of the treatment needs in Germany. Tooth mobility, exposed tooth necks and dentin hypersensitivity during the ingestion of food as well as functional limitations, discomfort because of pain or distress, for example in case of a changed smile, disabilities (physical, psychosocial and social) because of halitosis play an important role in the demand of therapy.

In case of assumption of the civil epidemiological data and risk factors, there are supposed to be approximately 15.000 soldiers in the medical services suffering a periodontitis needing a therapy (Baelum & López 2013, Genco & Borgnakke 2013, Holtfreter et al. 2010). 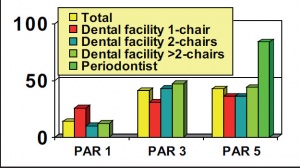 During the last years, an average number of 1.800-2.000 periodontal therapies have been realized primarily in the 4 GE AF hospitals with the specialized periodontal treatment centers. On average of the last decade military dentists in regional military dental facilities performed 6 periodontal treatments per year. Because of the missing nationwide care situation in Germany (approx. 150 civilian dental specialists for periodontology and 10 university departments with postgraduate programs for periodontology), there is at present no quality adjusted civil statuary health insurance support. Undergraduate dental curricula for periodontolgy were moreover redesigned during the last 20 years but yet not available on level 4 for competency at all German university dental schools (Baehni & Wiskott 2006, Chambers 1998).

A considerable increase of the treatment capacity by general military dentists for light and moderate periodontitis cases (83 %) with non surgical periodontal treatment is required. For a mostly dentate patient, an supportive periodontal treatment (SPT) visit lasting an hour, including periodontal recording (Periodontal probing depth, attachment loss, furcation involvements) and for example, subgingival scaling of five teeth will cost about € 150. For most patients, two SPT visits per year are required. Thus, 10 years of SPT would cost € 3.000. This amount of money would barely pay for the prosthetic reconstructions required to replace the average additional two teeth that would be lost without regular SPT (Eickholz 2013, Eger et al 2013, Müller et al 2013.) This should be managed in the GAF regional dental facilities. Therefore, the possibility to acquire a specialization in the domain of periodontology for military dentists in the form of a Curriculum Periodontology as a five-part course with 148 CE-hours and accreditation by the German society of periodontology has been created in 2010.

Participants documented their periodontal treatment abilities at the beginning of the first week course (PAR 1 at BL), after the third week-course (PAR 3: 133 CE hours, 6-18 months from BL), after two days of hospitation, supervision of surgical procedure by one of the four GAF-periodontal specialists at the military hospitals and the final presentation of three cases (PAR 5: 2-3 years from BL). 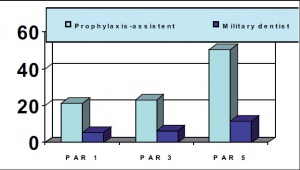 In the years 2012 and 2013, between 24 of 64 military dentists have completed this Curriculum with success. Periodontal treatment equipment was enlarged during the years 2010-2012 by regional GAF Dental Commands as well as the number of dental-prohylaxis assistants in the regional dental facilities.

The number of periodontal maintenance sessions within the scope of the pre-deployment prophylaxis, which have been rendered mostly by NCO/civilian dental‑prophylaxis assistants of the military dentists, has increased by 29.8 sessions per month. The existing known professional capability shortfalls in the field of periodontology (forms of diseases that they did not dare to treat) could be reduced from 58 percent to 8 percent. Patients with diabetes or HIV-associated periodontitis, generalized severe chronic periodontitis, aggressive periodontitis and periimplantitis are still send from most of the curricularly educated dentists to full-time postgraduate specialists in periodontology at the GAF-hospitals.

Periodontitis is a multifactorial disease with basically entity as a bacterial infection. The imbalance between bacterial infection and host response can be affected by many environmental, life style and genetic factors. The association of psychological stress with periodontal disease was a result of early studies of acute necrotizing ulcerative gingivitis in many military populations (for rev. Johnsons et al 1986). Based on several reviews on the effect of stress on the development of periodontitis it is reasonable to propose that stress /psychological factors are risk factors for periodontal disease, and that the effects can be modified or abrogated by adequate coping behaviors. In one trial the influence of coping behavior was assesed over a 24-month period. It was found that passive coping strategies resulted in more pronounced periodontal disease, whereas patients with active coping stategies had a milder disease level and more favorable course of treatment (Wimmer et al 2005). Moderate to advanced chronic periodontal disease has an adverse impact on quality of life. It could be beneficially improved after surface fullmouth debridement within 24hours which young military learnd to practice during their Curriculum in periodontology with the authors. Immediate and medium-term improvements in quality of life may reassure and motivate patients (Jowett et al 2009).

The results of our study indicate that postgraduate curricular education by general‑dentist in military regional dental facilities results in more periodontal treatment which reduces the effect of stress and periodontal disease on soldiers’ dental fitness and readyness for deployment. 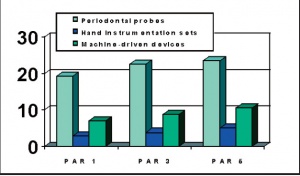 The small number of military dentist who completed the Curriculum after the first 3 weeks and short time of reevaluation are important for the interpretation of our results. Further research on the quality of treatment and the reasons for finishing the postgraduate curricular education is necessary.

This GAF-intern Curriculum Periodontology is an effective way to increase the treatment capacity between young military dentists, it is capable to close capability shortfalls caused by inadequate university education.

Conflict of interest and source of funding statement:

1990-93 Postgraduate training in Periodontology, University of Muenster in Westfalia

2009- Consultant for Periodontology to the General Surgeon