Trauma Registries are the golden standards in civilian trauma patient care for performance improvement, quality assurance and trauma system development. Few countries have implemented a military counterpart of such a system, collecting combat casualty care in different military operations. Committee of the Chiefs of Military Medical Services in NATO (COMEDS) requested different organizations to examine the possible options and if feasible lay down a road map towards a common NATO Trauma Registry (NTR). This article is summarizing the latest results.

When troops are being put in harm’s way, there is always social expectation to minimize the impact of sustained injuries and provide same quality of health care outcome in the combat area than in the home-country. Since the peace time trauma care regime is not fully applicable in the area of military operations, the adaptation of the system is required.

Nations with larger number of combat casualties established a military trauma registry to find answers for the challenges of combat casualty care. These databases have many similarities and differences, according to the national concept of casualty management, but all the systems have proved their benefit and committed to the evolution of the current state of the art military trauma care.

The idea of founding a common NATO Trauma Registry came out several years ago. It is apparent that there is a particular limitation for nations whose casualty numbers and case loads are not sufficiently large to allow scientifically and statistically robust analysis. Furthermore there is no standardized means of communication or exchange of information. These factors limit the systematic exploitation of lessons learned. The solution might be a centralized data pool and consecutive analysis and reporting capability on trauma patient care, what would facilitate performance improvement for all troop contributing nations of the Alliance.

NATO Research and Technology Organisation has conducted the first relevant research project on NTR and published the results in 2008. The report provided firm advises how to establish the registry and detailed analysis of the possible constrains. The final recommendation was to establish a common NATO Trauma Registry with the subsequent national databases - where not in place yet - and set up a central place for data management and analysis support. Due to the different national legal regulations only anonymized data should be transmitted and handled.

The COMEDS noted the report and tasked the working group structure to initiate the work; Military Health Care Working Group (MHC WG) received the overarching function of the development. Emergency Medicine and Medical Communication and Information Systems Expert Panels were involved in the construction of the minimum dataset required to be exchanged. Belgium assumed the custodianship of the NATO Trauma Registry project.

In 2010, acknowledging the comprehensive work done by the custodian, the NATO Trauma Registry project was reaffirmed. A NTR Task Force (TF) was established under the umbrella of MHC WG, with the Centre of Excellence for Military Medicine (MILMED COE) as coordinating secretary supported by volunteer participating nations (BEL, CZE, DEU, FRA, GBR NLD, USA). NATO Communication, Command and Control Agency (NC3A) was tasked by Allied Command Transformation (ACT) to support the project and facilitate the project development. The TF has the mandate from COMEDS to accelerate the process and validate progress through the use of a pilot study.

The pilot study meant to provide further guidance for nations how to coordinate their efforts and develop their national trauma registries. This study was a descriptive study, and also aimed to assess the feasibility of NTR. Furthermore the study examined the NTR Minimum Core Data Elements and the features of the available military trauma registries.

Data exchange of the parallel developed NTR prototype and the already existing UK and US Joint Theatre Trauma Registry was also in the scope of the experimentation. 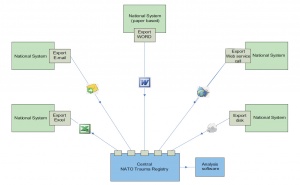 The two weeks period of deployment was split into two parts. In the first week the team visited the FRA Role3 hospital in Kabul International Airport (KAIA), the second week was spent in the DEU Role3 hospital in Mazar-e-Sharif (MeS), ISAF Regional Command North.

The team tested the clinical data availability and compliance with the NTR Core Data Elements, the UK and US trauma collection forms. The registered trauma data were later populated to all three registries (NTR, UK, US) respectively.

Due to the limitation of this article detailed discussion of the field collection experiences is only available in the NTR Task Force final report.

Parallel effort was carried out by NC3A and UK, US to try out the data exchange. The first step for the existing database owners was to compare their dataset with the minimum required Core Data Elements. Then later to select those data elements which fit most to the NTR dataset.

NC3A was the leading member of the Task Force for coordinate the data transmission and to receive the data messages. To allow NC3A to store the sent data, they constructed an NTR prototype and also a schema. This schema worked as an interface/filter in the identification of the transmitted data. Figure 1. depicts the basic outline of the future relation between  the national registries and the NTR.

The final chapter of the article is briefly summarizing the results of the theatre data collection trip and the IT related experiences and finally provides recommendations.

Results of the field data collection

Results of the data exchange procedure

Data exchange was tested with 74 test patient from UK and US trauma registry. The direct data export from both existing trauma registries into the NATO TR prototype failed because of the incompatibility of the systems and the inappropriate level of the data standardization. The NTR Prototype I. need significant re-arrangements to ensure a standardized data import.

Figure 2. is a proposed cycle for the NATO Trauma Registry related system development and also provides guidance for nations if they wish to establish their new trauma system.